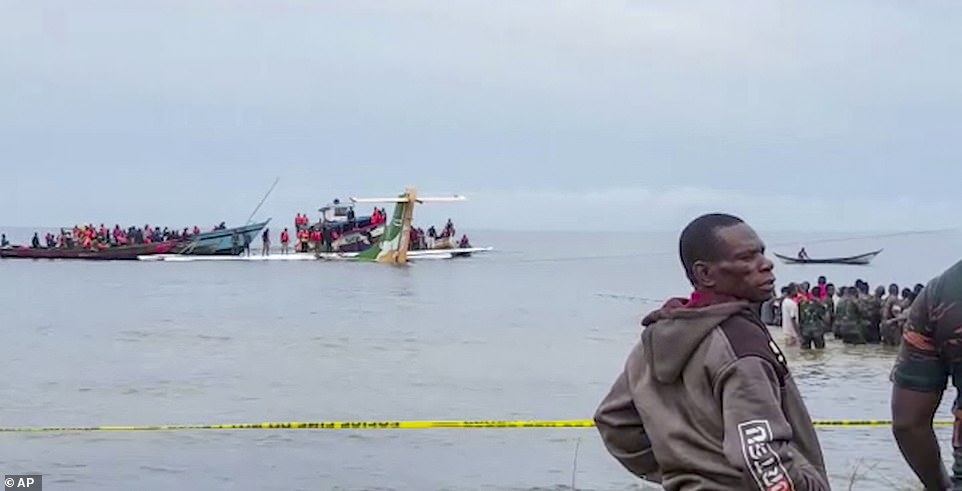 Bad weather caused a plane carrying 43 people to crash into Lake Victoria in Tanzania, 100 yards short of the airfield where it was scheduled to land.

Regional commissioner Albert Chalamila reported that 26 individuals have been rescued and transported to hospitals.

Mr. Chalamila stated, “The rescue mission is still in progress, and we are in contact with the pilots.”

Rescuers, including fishermen, can be seen wading through water to bring victims to safety in internet footage.

The emergency services attempted to remove the airplane out of the water using ropes and cranes, with the assistance of local civilians.

The aircraft was an ATR-42 constructed by the Franco-Italian company ATR in Toulouse.

The airline issued a statement confirming the accident, stating, “The rescue team has been despatched to the location, and additional details will be given in two hours.”

President Samia Suluhu Hassan of Tanzania extended her condolences to the victims of the catastrophe.

She wrote, “Let’s be calm as the rescue operation proceeds and we pray to God for assistance.”

The leader of the African Union Commission, Moussa Faki Mahamat, also expressed his condolences through Twitter: ‘Our hearts and prayers go out to the families of the passengers aboard the plane that crashed into Lake Victoria, with our entire solidarity to the Government & people of #Tanzania.’

Precision Air was established in 1993 and is partially owned by Kenya Airways. It provides internal and regional flights in addition to private charters to renowned tourist locations like Serengeti National Park and the Zanzibar archipelago.

Five years ago, eleven individuals, including American and German tourists, perished in a plane crash in northern Tanzania.

The company announced in a statement published on its website at the time, “We are profoundly saddened to hear that eleven individuals have perished following a single-plane accident this morning in Northern Tanzania.”

In 2019, 157 passengers and crew were killed when an Ethiopian Airlines Boeing 737 Max 8 crashed in Addis Ababa within minutes of takeoff.

Witness to the crash, 25-year-old Gebeyehu Fikadu, told CNN that he was collecting firewood nearby when he observed the plane’swerving’

He stated, ‘I was in the surrounding mountain when I observed the plane approach the mountain, turn around with a great deal of smoke pouring from the rear, and then crash at this location.

It exploded with a loud crash. When it crashed, burning baggage and clothing fell to the ground.

Before crashing, the jet was swerving and diving while producing a lot of smoke and a very loud, unpleasant noise.

Within minutes of takeoff, flight tracking data revealed that the plane’s vertical speed – the rate of ascent or descent – ranged from 2,624 feet per minute to -1,216 feet per minute.

Aviation experts viewed the data as highly odd at the time, stating that a plane’s vertical speed should increase or remain stable after takeoff.

Sally Gethin, an expert, opined that the plane’s varying speed may indicate that it stalled in the seconds preceding the disaster.

She stated, “The rate of ascent and descent are the most crucial phases of flight.” Instability at that time – for instance, flying too slowly – could destabilize the aircraft, putting it at risk of stalling and other dangerous outcomes. It may suggest that the pilots had trouble regulating the ascent.

An experienced pilot told MailOnline that the behavior was quite uncommon.

He stated, “A positive number means the airplane is climbing.” After takeoff, these figures should be positive as the aircraft climbs away from the ground, or 0 if the aircraft is flying level.

‘The limited data that has been available thus far suggests that this aircraft began a descent at a rate of up to 1920 feet per minute after approximately one minute of flying. If the data is accurate, that is a highly exceptional occurrence.

The data then depicts the airplane ascending and descending till the data ends. This is why some individuals refer to unstable vertical velocity.

After takeoff, planes either ascend or fly level for a time before climbing again.

Another witness, Tegegn Dechasa, told AFP that the aircraft was already ablaze when it crashed. The collision generated a massive explosion.

Malka Galato, the farmer whose land the plane fell on, told Reuters that he observed what appeared to be little pieces of paper emerging off the plane.

He stated that the plane made a weird sound and made a sharp turn just before it crashed.

A second farmer, Sisay Gemechu, observed, “The plane appeared to be going for a nearby open field, but crashed before reaching it.”

In 1996, 125 people perished on Flight 961 in Moroni, the capital of the Union of the Comoros in the Indian Ocean, due to a hijacking and a disastrous water landing.

And in January 2010, 82 passengers and eight crew members perished when EA flight 409 from Beirut to Addis Ababa crashed shortly after takeoff into the Mediterranean Sea.

In 2007, a Kenya Airways flight from Abidjan, Ivory Coast, to Nairobi, Kenya, crashed into a marsh shortly after takeoff, killing all 114 passengers.

In 2000, minutes after takeoff, a second Kenya Airways flight from Abidjan to Nairobi crashed into the Atlantic Ocean, killing 169 people and leaving 10 survivors.