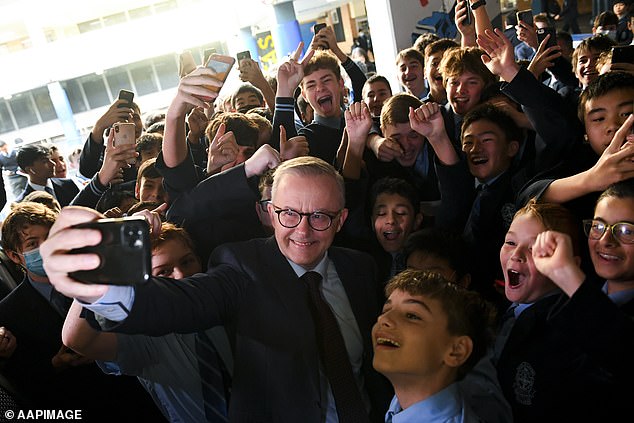 Tanya Plibersek has finally appeared alongside Anthony Albanese after claims the popular Labor MP was ‘benched’ from the campaign trail.

But it wasn’t smooth sailing with a school bell repeatedly going off and interrupting Mr Albanese as he tried to begin his press conference.

‘The bell tolls for the Morrison Government,’ a quick-thinking Mr Albanese quipped.

Both are from the left faction of Labor and were considered for the party’s leadership when Bill Shorten quit after the 2019 election loss.

Ms Plibersek quickly pulled out of contention, leaving Mr Albanese to duke it out with right faction hopefuls.

Back then, Ms Plibersek said she had ‘support, from across the party, to be elected leader’ but the move would have required too much time away from her family.

She added she was was ‘overwhelmed by the confidence my colleagues, the union movement, and Labor party members have placed in me’.

Nationals leader Barnaby Joyce on Monday claimed he and PM Scott Morrison could work far better together than Mr Albanese and Ms Plibersek.

‘Tanya Plibersek is 10cm away from the seat of Grayndler, right next door, and you can’t see Tanya and Albo at the same coffee shop,’ Mr Joyce said.

‘They can’t stand each other.’

‘Last night I put forward ideas… I ask you to think about what were the policy measures that Scott Morrison said he would do in his fourth term if he’s elected. If he is given three more years, we can’t afford three more years of the same.’

While a hung parliament remains a distinct possibility following the election, Mr Albanese said Labor wanted to govern in its own right.

‘We should have 150 Labor members in the House of Representatives, that is my starting point. I think we will fall short of that, but my objective is 76.’

Despite not being able to guarantee a lift to real wages at Sunday’s debate, Mr Albanese said he remained confident about working alongside businesses and unions to improve working conditions.

‘The truth is we have had flatlining wages over 10 years. The key to lifting wages is lifting productivity,’ he said.

‘Our clear objective is to lift up living standards… (the prime minister) couldn’t even say that Australian workers should be paid the minimum wage.’

Labor is looking at splashing nearly $150 million on getting more high achievers into teaching and boosting the numbers of science and mathematics teachers.

The sector sees at least one in three teachers quit in their first five years of teaching, with unions complaining of extra workloads pushing members to their limit.