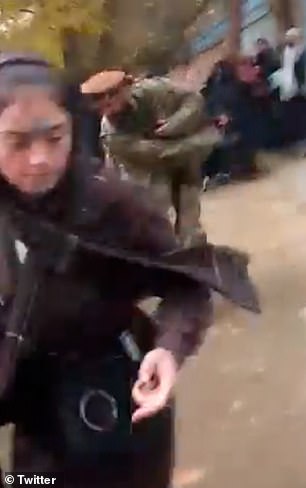 In horrifying video, female Afghan students are shown being beaten by a Taliban official after being denied access to their college because they were not wearing burkas.

Students at Badakhshan University in northern Afghanistan, the ladies said they were physically assaulted by members of the Taliban’s Ministry of Virtue and Vice for wearing hijabs, or headscarves, rather than burkas.

One of the guards for the Taliban administration can be seen today in a video shared on social media running after the kids with a whip and beating them to scatter them.

The video shows hundreds of women with textbooks and other school materials waiting outside the campus gates while males pass by and enter.

It comes after the Taliban’s religious police tightened regulations on how women should wear in Badakhshan, notably in the capital city of Faizabad, where the institution is situated, which was almost three months ago.

According to the Directorate of Vice and Virtue, women should wear either a burka, which has a mesh window over the eyes and covers the whole body and face, or a niqab, which covers the head and face but not the eyes.

Alive in Afghanistan spoke with Mursal, a student at Badakhshan University, who said she has seen women sent away for not dressing appropriately.

We were stopped on the way to campus today, and they even examined our fingernails, another student, Samia, said last month. A student who was wearing nail paint was the target of their intended smack, but she fled. To capture and punish her, they made a call ahead to the next checkpoint.

After the Taliban seized power in the nation, public colleges resumed accepting female students in February. However, there were severe clothing codes and separate classrooms for men and women.

Since secondary school for females is still prohibited in the nation, soon women won’t have the credentials necessary to enroll in higher education.

Sher Mohammad Abbas Stanikzai, the deputy minister of foreign affairs for the Taliban, demanded last month that authorities let females attend school beyond the sixth grade, claiming that Islam offers no justification for the prohibition.

However, even if practical impediments to women accessing higher education were eliminated, a person with links to the Taliban leadership told the Guardian that the government was contemplating restricting them to degrees in healthcare and education.