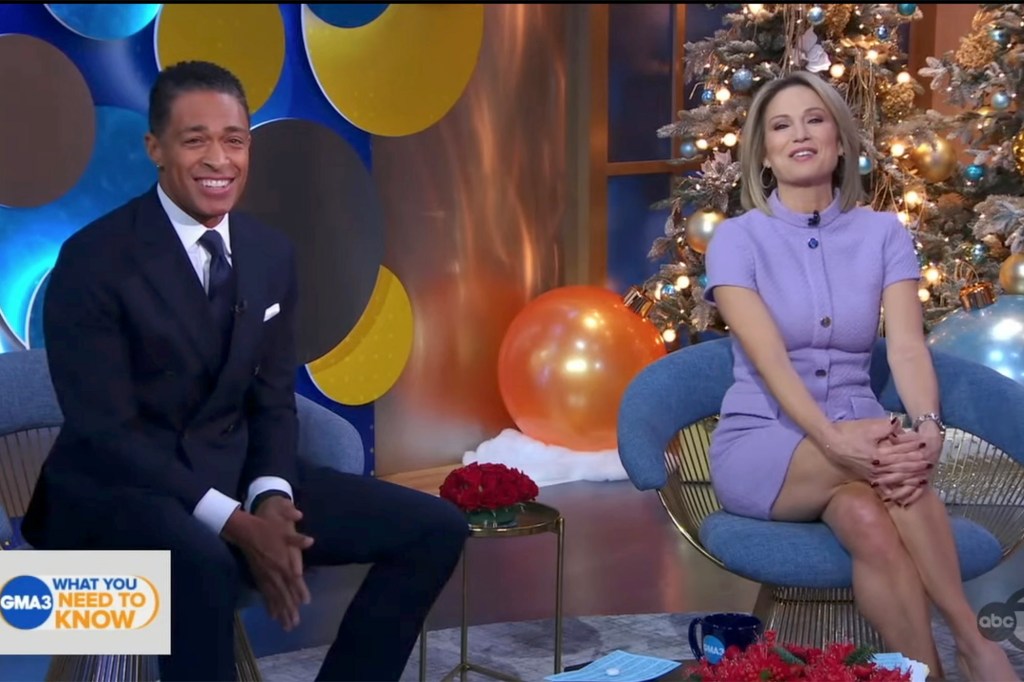 According to a source, T.J. Holmes and Amy Robach will no longer host the third hour of “Good Morning America” following a bombshell claim that the employees were having an affair.

Stephanie Ramos and Gio Benitez will anchor “GMA3” this week as ABC executives choose how to handle the PR nightmare, according to the Daily Mail, which first reported the announcement Monday morning.

No representative from “GMA3” responded to calls for comment.

A insider told the Daily Mail, “There is enormous internal disarray.” “ABC News executive Kim Godwin has taken them off the air while the network handles this matter internally.”

On the weekend, Entertainment Tonight reported that Holmes had an affair with a former “GMA” producer that lasted several years prior to his relationship with Robach.

Last week, a stunning investigation claimed that T.J. Holmes and Amy Robach were having an affair in secret.
ABC

According to a source, this story, together with last week’s debacle, contributed to Monday’s decision to demote the co-anchors.

The Post stated that ABC News president Godwin and other top executives at ABC were considering their options. The Daily Mail published videos and photographs of the couple canoodling the previous week, prompting them to hold “emergency meetings.” According to sources close to ABC, Godwin was ignorant about the affair.

Although the co-anchors looked unaffected by the news of their relationship when they hosted the show on Friday, Page Six revealed that Robach was divorcing her star spouse.

It is unclear how Shue or Holmes’s wife, attorney Marilee Fiebig, found out about the affair, but Page Six has heard through sources that the couples have been apart since August.

Holmes and Robach may have been temporarily suspended as a result of a fresh revelation indicating a past relationship at work.

Robach was spotted moving out of the New York City house she had lived with Shue on Friday, following the recording of “GMA3,” when she broke her silence on the subject for the first time.

When asked whether she had anything to add, Robach told a Daily Mail reporter, “It’s been fantastic. I have received significant help. And, you know, I appreciate everything, and I’m excited to be heading to work,” before entering a black service vehicle.

»T.J. Holmes and Amy Robach are temporarily removed from GMA3 as ABC executives investigate a scandal«