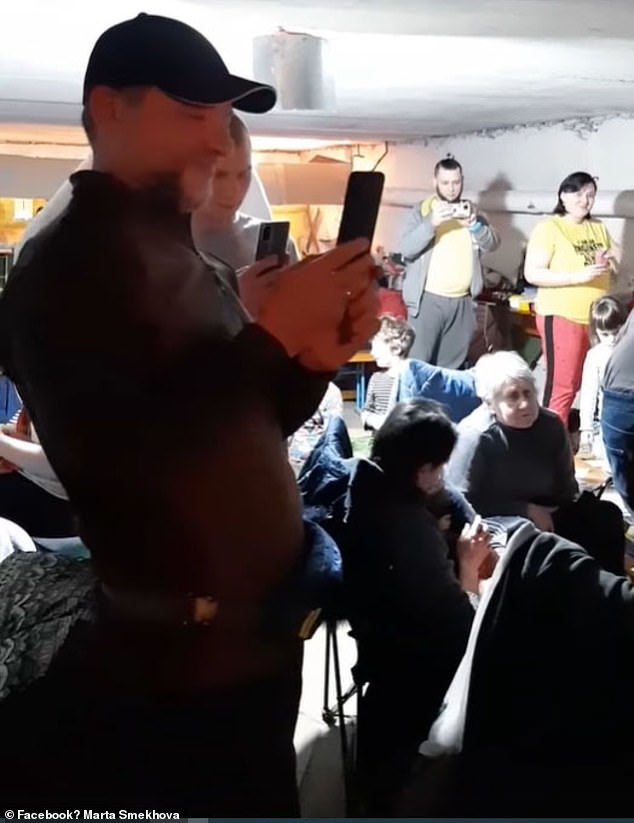 A seven-year-old girl who went viral after singing a song from Disney’s Frozen in a Ukraine bunker has told Susanna Reid she will return to her country ‘when we have our victory’.

Good Morning Britain presenter Ms Reid travelled to Medyka on the Ukraine-Poland border and met the schoolgirl Amelia Anisovych, who fled her war-torn country with her grandmother and brother Misha.

Amelia had gone viral for singing the popular Frozen song Let It Go while living through Russian bombardment during a ‘terrifying’ week-long stay at a bunker in Kyiv.

Speaking in a ‘special interview’ which aired this morning, Amelia said she’d like to go home again ‘when the war is finished’.

When asked how soon she thinks that would be, the seven-year-old pumped her fist in the air and said: ‘When we have our victory.’

Her mother Lilia said it was perhaps the sixth day of sheltering underground when Amelia sang the hit song.

She said: ‘On the day we shot the video we were all exhausted. We heard sirens all the time and we were exhausted.’

Ms Reid asked Amelia about the journey out of Ukraine with her grandmother and brother, and the child said: ‘I was hungry at one point, but we had two sandwiches, so I ate a sandwich. I made new friends on the journey and everything was fine.’

When asked what she thought about Russian premier Vladimir Putin, Lilia said: ‘What a question. This creature doesn’t deserve to exist or be talked about. Putin is a global evil.’

Amelia spoke ahead of her performance on Poland’s The Voice, Kids on Saturday night.

Amelia’s Ukrainian version of the hit song had first been shared on Facebook in March by Marta Smekhov, who said that ‘even men couldn’t hold back the tears’.

The rendition was shared hundreds of thousands of times across various social media platforms and earned Amelia messages of support from the song’s original singer Idina Menzel and composer Kristen Anderson-Lopez.

But many feared ‘the little girl with the beautiful voice’, as she was described by Anderson-Lopez, would become yet another tragic casualty of Russia’s invasion of Ukraine.

Fortunately, it was revealed last month that after nearly a week in a bunker surviving on almost no food or water, little Amelia completed a gruelling two-day journey to Poland, and is now living safely with her grandmother.

She made the trip with her 15-year-old brother Misha, while mother Lilia and father Roman stayed behind in Kyiv.