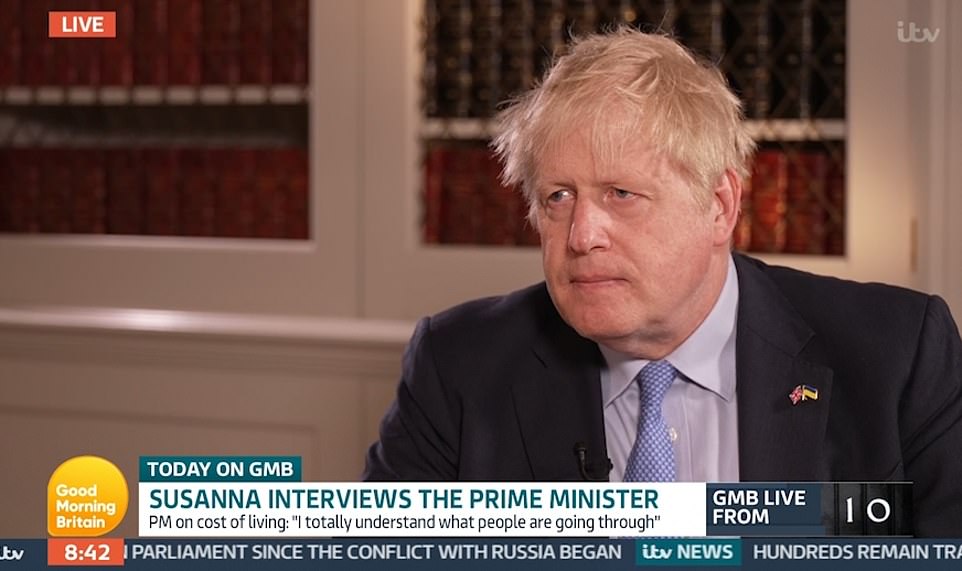 The 77-year-old whose cost-of-living plight left Boris Johnson floundering was ‘disappointed’ with his response, it has been revealed.

The PM was confronted with the example of Elsie by Susanna Reid during a tricky interview on ITV’s Good Morning Britain yesterday.

The pensioner’s energy costs in her council flat have risen from £17 to £85 a month, and Reid told the premier that she now ‘uses her freedom bus pass to stay on buses all day to avoid using energy at home’.

Extraordinarily, Mr Johnson replied by saying he had brought in the free bus pass that Elsie was using – even though in fact the benefit had been introduce years before he was London Mayor.

Speaking to LBC’s Tonight with Andrew Marr, Ms Reid said: ‘I’ve spoken to Elsie, since the interview this morning with the Prime Minister, and she says how disappointed she is with what he said.

‘Because she says there are people who are even worse off than she is, and there was no answer for them, apart from ‘oh I was the person who was responsible for the bus pass,’ I mean, as if she’s supposed to be grateful.’

Meanwhile, Environment Secretary George Eustice said in a round of interviews this morning that Elsie should be asking for money from her local council rather than riding buses.

‘Well, my advice would be that, you know, not to stay on a on a bus all day to try and stay warm,’ he told Sky News.

‘My advice would be to seek some support from the local authority.’

Mr Eustice also sparked a backlash by suggested people should buy more value brands to help save money amid the cost-of-living crisis.

During his toe-curling GMB interview yesterday, Mr Johnson was asked what Elsie should cut back on.

‘I don’t want Elsie to cut back on anything, let’s talk about Elsie and what we are doing and – just to remind you that the 24-hour freedom bus pass was something that I actually introduced.’

‘So Elsie should be grateful to you for her bus pass? What else should she cut back on?’ Ms Reid replied.

Mr Johnson went on: ‘There are plenty of things more that we are doing. What we want to do is make sure we have people who are in particular hardship looked after by their councils, we are putting much more money into local councils. We have the particular payments to help elderly people in particular with the cost of heating.’

However, Mr Johnson’ claim to have introduced the freedom pass. It was brought in in 1973, although he did extend it’s use to 24 hours a day when mayor. However its use was banned before 9.30am amid TfL budget restraints caused by the pandemic.

In his interview he also admitted that it was possible inflation could hit 10 per cent this year, placing additional strain on families.

And right at the end he left viewers in hysterics after admitting he didn’t know who Lorraine Kelly is ahead of her programme. Having been grilled about the cost-of-living crisis and partygate, the 57-year-old attempted to convince viewers to vote Conservative, but was interrupted by Susanna explaining that they have to end the discussion in time for Lorraine’s show.

The PM insisted the Government is doing ‘everything we can’ to help with the cost-of-living crisis, but warned that increasing state support beyond its current levels could drive inflation even higher.

There is a ‘global context’ caused by a surge in energy prices which is hitting all aspects of the economy including food, he said, adding: ‘The cost of chickens is crazy.’

On energy, Mr Johnson said: ‘This country is in the insane position of having to take in, pipe in, electricity from France and elsewhere because we haven’t done enough to invest in our own security of energy and electricity.’

The PM also distanced himself from remarks by Chancellor Rishi Sunak last week in which he suggested the Government could ‘look again’ at a windfall tax on energy firms.

Both Labour and the Lib Dems are pushing for a one-off levy on massive profits made by firms at the same time families struggle with their costs.

Mr Johnson warned that a windfall tax on energy companies would deter investment, and set out why taxpayer support for households has to be managed to avoid fuelling inflation.

‘If you put a windfall tax on the energy companies, what that means is that you discourage them from making the investments that we want to see that will, in the end, keep energy price prices lower for everybody,’ he said.