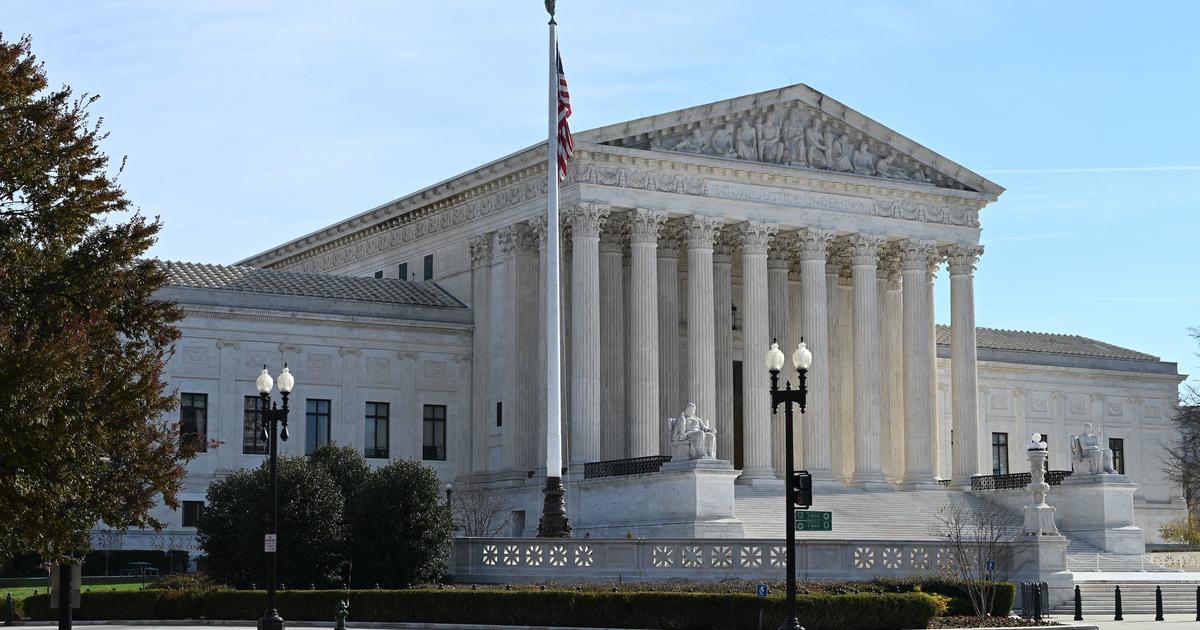 — Washington Wednesday, the Supreme Court heard oral arguments in a landmark redistricting case from North Carolina, which has prompted warnings from experts about the disruptions it might create to elections throughout the country and the unrestrained power it could give state legislatures over voting regulations.

Moore v. Harper originates from the redrawing of the congressional map by North Carolina’s GOP-led legislature after the 2020 Census, which was thrown down by the state supreme court as an excessive political gerrymander in violation of the North Carolina Constitution.

At the center of the dispute, however, is a little-known doctrine known as the “independent state legislature theory,” which had largely lain dormant for more than 15 years before being resurrected by former President Donald Trump and his allies in an effort to overturn the results of the 2020 presidential election.

Under the idea, which North Carolina Republican leaders are urging the Supreme Court to accept, the Constitution confers sole authority to state legislatures for adopting federal election standards, without state court scrutiny to ensure that these laws accord with state constitutions.

The implications of the Supreme Court endorsing the independent state legislature theory loom over the arguments at a time when some Republicans have questioned the integrity of elections and after the 2020 presidential election, Trump attempted to pressure state lawmakers as part of a broader effort to challenge its outcome.

Justice Elena Kagan stated that the idea’s adoption by the court would have far-reaching effects, calling it a “theory with significant repercussions.”

Kagan predicted that the adoption of the independent state legislature theory would permit legislatures to engage in “the most extreme forms of gerrymandering,” allow state lawmakers to enact restrictions on voting and eliminate voter protections, and even lead legislatures to grant themselves a role in the certification of elections.

In 2000, then-Chief Justice William Rehnquist cited a variant of the theory in his concurring opinion in Bush v. Gore, and more than two decades later, three conservative Supreme Court justices — Samuel Alito, Clarence Thomas, and Neil Gorsuch — have voiced sympathy for the theory. A fourth justice, Brett Kavanaugh, asked the court to take a case that raises the question of whether state courts lack the authority to examine state legislators’ acts regarding federal election laws and district boundaries.

Uncertainty exists as to whether a majority of justices are prepared to accept the idea, and some court observers have expressed doubt that the Supreme Court will do so.

Thomas started cross-examination by asking David Thompson, who is arguing on behalf of Republican leaders, “why this lawsuit is here?”

Thomas stated, “We don’t generally review state supreme court interpretations of state constitutions, so I’d like to see why, if this were a case involving a state legislature or legislative district, it’s unlikely you’d be here under the state constitution.” How does it vary from a state-only case?

The North Carolina Republicans’ argument hinges on the phrase “Legislature” in the language of the Constitution’s Elections section, which states that the procedure of federal elections should be “established in each state by its legislature.”

“This textual choice has an apparent and inevitable consequence: only state legislatures have the authority to oversee federal elections,” attorneys for North Carolina Republican leaders said in a brief filed with the Supreme Court.

However, Chief Justice John Roberts pointed out to Thompson that North Carolina Republicans recognize that state legislative action covered by the Constitution’s Elections Clause is subject to a governor’s veto — the governor being separate from the legislature — and that allowing the veto of such actions by the legislature “significantly undermines the argument” that the state houses have the power to do whatever they want.

Lawyers for the nonprofit organization argued in a brief, “It is rare to encounter a constitutional theory so antithetical to the Constitution’s text and structure, so inconsistent with the Constitution’s original meaning, so disrespectful of this Court’s precedent, and so potentially damaging to American democracy.”

North Carolina voters and voting rights organizations, who are urging the court to reject the independent state legislature theory, warned that adopting the GOP-proposed theory would “wreak havoc” by requiring state elections officials to run two elections simultaneously: one for state elections governed by state constitutions, and another for federal elections.

Neal Katyal, who argued on behalf of the voters and nonprofit groups, repeatedly emphasized to the Supreme Court that a verdict in favor of the state Republican lawmakers would be tantamount to “opening Pandora’s box” and that “the explosion radius under their reasoning begins at the size extra big.”

Even though the lawsuit stemmed from the redistricting process in North Carolina, experts cautioned that a verdict supporting the independent state legislative theory would have far-reaching implications for election regulations.

More than 170 state constitutional protections, 650 state statute provisions, and hundreds of administrative rules issued by election authorities would be at danger, according to Tom Wolf, deputy director of the Brennan Center for Justice’s Democracy Program. In addition, he projected that the adoption of the independent state legislature would increase political gerrymandering since state courts would no longer evaluate congressional district plans under state constitutions.

Professors William Baude and Michael McConnell have suggested that the Supreme Court may instead issue a ruling prohibiting state courts from having a legislative role when formulating remedies for state constitutional infractions.

The lawsuit has received friend-of-the-court papers from a plethora of politicians, voting and civil rights groups, lawmakers, historians and experts, and the opposition to the autonomous state legislative notion is robust and nonpartisan.

In a significant filing, the Conference of Chief Justices, composed of the chief justices or judges of the highest courts in all 50 states, informed the Supreme Court that the Elections Clause “does not affect States’ decisions to authorize judicial review of state laws, including under state constitutions.”

Luttig is a member of the legal team defending the nonprofit organizations and voters in the Supreme Court dispute.

A court ruling is anticipated before the end of June.