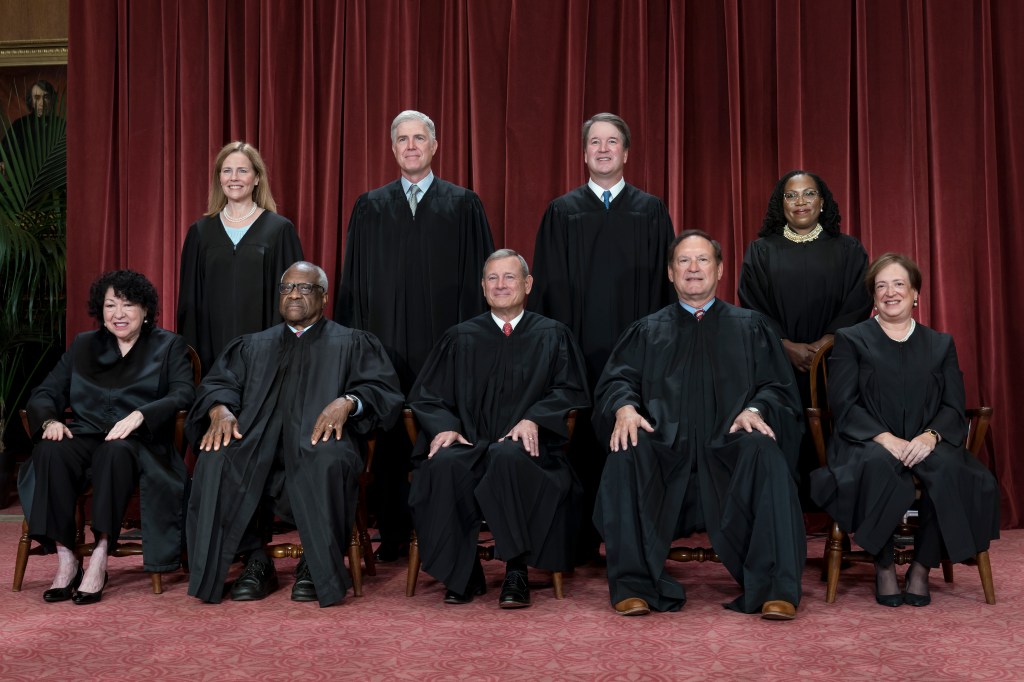 WASHINGTON — The Supreme Court is preparing to hear a new election case, a Republican-led challenge seeking a unique finding that could greatly expand the influence of state legislators over congressional and presidential elections.

The court is scheduled to hear arguments Wednesday in a case from North Carolina, where a Democratic majority on the state Supreme Court overturned Republican efforts to design congressional districts substantially in their favor because the GOP plan violated the state constitution.

The question for the justices is whether the section of the United States Constitution that gives state legislatures the authority to choose the “times, places, and manner” of congressional elections excludes state courts from the process.

The Republican leaders of the North Carolina legislature informed the Supreme Court that the Constitution places the regulation of federal elections in the hands of state legislatures, Congress, and no other entity.

Regarding federal elections, three conservative judges have previously expressed sympathy for the notion that the state court inappropriately assumed constitutionally granted authority. A fourth has expressed support for reducing the authority of state courts in this area.

The judges will hear arguments in a case from North Carolina, where a Democratic majority of the state Supreme Court halted Republican efforts to shape congressional districts strongly in their favor.
AP

However, the Supreme Court has never cited the so-called doctrine of the autonomous state legislature. However, three conservatives referenced it in a separate ruling in the Bush v. Gore case that decided the 2000 presidential election.

Opponents of the notion claim that if the court were to accept it now, the ramifications would be considerably larger than merely redistricting.

According to the Brennan Center for Justice at the New York University School of Law, the most favorable ruling for North Carolina Republicans could undermine more than 170 state constitutional provisions, over 650 state laws delegating authority to make election policies to state and local officials, and thousands of regulations down to the location of polling places.

Luttig, who advised former Vice President Mike Pence that he lacked the authority to reject electoral votes after the 2020 election, is among a group of prominent conservatives and Republicans who oppose the broad claim that legislatures cannot be challenged in state courts when they make decisions regarding federal elections, including congressional redistricting.

Ginsberg stated in a Supreme Court petition, “Unfortunately, due to continuous and pervasive attempts to sow suspicion and propagate disinformation, confidence in our elections is at an all-time low.” “The version of the autonomous state legislative theory proposed by Petitioners in this case threatens to make a bad situation significantly worse, worsening the current political division and further weakening faith in our elections.”

The discussions take place a day after the last 2022 midterm election, the runoff between Democratic Sen. Raphael Warnock and Republican Herschel Walker for the Georgia Senate.

In that case, state courts sided with Democrats against Republican opposition to allow early voting on the Saturday before the election.

Michael Luttig is one of a number of notable Republicans who oppose the broad claim that legislatures cannot be challenged in state courts when they decide on federal elections.
AP

Jason Snead, of the conservative Honest Elections Project, stated that the case presents a chance for the Supreme Court to rein in out-of-control state courts, which are being pressured by Democratic attorneys to impose new laws limiting voting, such as in Georgia.

In a call with reporters, Snead stated, “We’ve seen a very widespread effort to utilize the courts to change election rules when those laws don’t fit political objectives.” When anything violates the Constitution, it is not something we want to see.

The case does not pose a “threat to democracy,” according to him and other proponents of the high court’s action.

A group of New York voters stated in a court filing that the justices might alternatively draft a narrow judgment that lays limitations on state courts without disturbing the choices New York and other states have taken to prevent political redistricting.

During the most recent redistricting cycle, states that utilized independent redistricting commissioners as opposed to legislatures were mostly Democratic. In states with Democratic legislatures and governors, commissions attracted 95 House seats, compared to only 12 in states with Republican control. A verdict that affords legislators supreme authority over redistricting might eliminate these panels and allow Democrats to rewrite a substantial portion of the House map.

Former Attorney General Eric Holder, head of the National Democratic Redistricting Committee, stated that the consequences of this fringe notion would be disastrous. “It may unleash a tidal wave of partisan redistricting from both parties.”

On a national redistricting plan that was effectively fought to a draw and where state court judgments lost Democrats roughly as many House seats as Republicans, even less dramatic adjustments may not necessarily favor the GOP.

In March, the Supreme Court declined to intervene in the North Carolina case, permitting the court-drawn districts to be utilized this year.

Samuel Alito, Neil Gorsuch, and Clarence Thomas were dissenting justices. Alito, writing on behalf of the three, stated, “There must be a restriction on the power of state courts to overturn actions made by state legislators when they prescribe standards for the conduct of federal elections. I believe the petitioners have a good chance of demonstrating that the North Carolina Supreme Court violated those bounds.”

Separately, Justice Brett Kavanaugh has discussed the necessity for federal courts to monitor the conduct of state courts in relation to federal elections.

The record of Chief Justice John Roberts on this issue offers both parties optimism. In 2015, he strongly disagreed with the Arizona court’s decision to maintain an independent redistricting panel.

Roberts said that the Constitution prohibits a state from completely excluding the legislature from the redistricting process.

Roberts, however, authored the court’s majority judgment in 2019 that closed federal courts to accusations of political gerrymandering, while noting that state courts remained open. In an opinion supported by Alito, Gorsuch, Kavanaugh, and Thomas, he stated, “Provisions in state legislation and state constitutions may offer standards and guidelines for state courts to apply.”

Amy Coney Barrett, the other conservative judge on the court, has no track record in this area.

Regardless of the outcome of the high court lawsuit, a fresh round of redistricting is scheduled to occur in North Carolina next year and yield a map with more Republican seats.

During last month’s elections, voters switched the majority on the state Supreme Court by electing two new Republican justices, giving the GOP a 5-1 advantage and making it likely, but not guaranteed, that the court would support a map with more Republican districts.