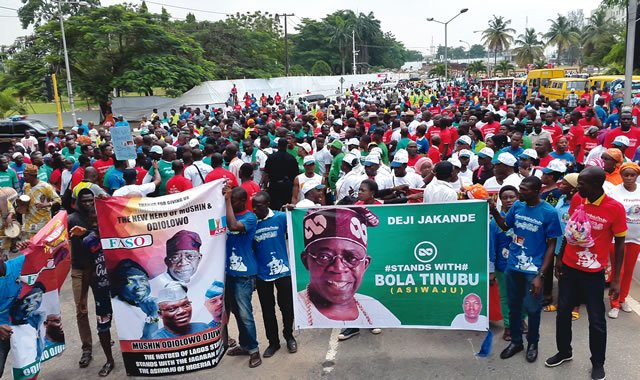 Supporters of a National leader of Nigeria’s governing, the All Progressives Congress, APC, under the aegis of Tinubu Support Group, TSG, have picked the APC 100 million naira nomination form for their principal, the former governor of Lagos State, Mr Bola Ahmed Tinubu who is aspiring to be Nigeria’s next president.

The TSG was led by a member of Nigeria’s House of Representatives, James Faleke and a former Secretary to the government of the Federation, Babachir Lawal.

Mr Faleke, while extolling Mr Tinubu’s qualifications, said they would abide by the party’s decisions regarding the mode of primaries.

“He is a man who rewards loyalty and ensures that people who work are taken care of. He will ensure that employment opportunities are better off, strike will be a thing of the past. The civil service was done in Lagos, he will do it again in Nigeria,” Faleke said.

The former SGF, Mr Babachir Lawal, said he was sure of Mr Tinubu’s chances of winning the election.
“If we were not sure we have chances to win this election, we would not waste our N100 million. Everybody is free to buy the forms if he has N100 million.

“The choice is his own. He has the money. But as far as we are concerned we are only fulfilling the constitutional requirement of campaigning and going for election. We don’t foresee any opposition in the contest,” Lawal said.

The contest for Nigeria’s 2023 presidency is on in the APC as some presidential aspirants have also purchased the form. Amongst those to collect the forms are the Governor of Kogi State, Yahaya Bello, Nigeria’s Minister of Education state, Chukwuemeka Nwajioba and Senator Rochas Okorocha.

Many more are still expected to pick the APC Presidential form, such as the Vice President, Yemi Osinbajo, a former Senate President, Ken Nnamani, Minister of Transportation Rotimi Amaechi, Minister of Labour Chris Ngige, among others.