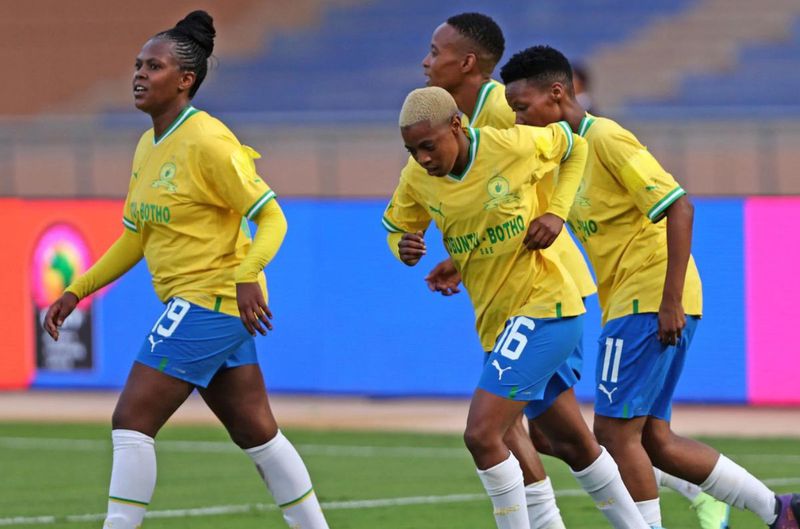 The defending champions Mamelodi Sundowns Ladies began the second season of the CAF Women’s Champions League with a 2-1 victory over Bayelsa Queens.

In the opening match of Group B, Lelona Daweti’s brace was enough to give the defending champions a hard-fought victory over the newcomers.

Early on, the Brazilians dominated possession and were rewarded with a magnificent goal courtesy of Lelona Daweti’s deft header off of a soaring feed by Thalea Smidt.

Mary-Magdalene Anjor scored a late consolation goal for the Nigerian debutants. This did little to dampen Sundowns Ladies’ victory celebration.

Lelona Daweti, who scored the first brace of this year’s competition, lauded the collaborative efforts of the squad after the game, saying, “I am extremely pleased with how we performed against our opponents. Our strategy was to control possession and capitalize on our opportunities, and we accomplished exactly that. My happiness stems from scoring twice, but my entire elation stems from the fact that we earned maximum points. What a wonderful way to begin the meeting!”

Andile Dlamini, the goalkeeper, was also thrilled with the result: “Getting three points in the first game is usually a tremendous lift, and we accomplished that. We are pleased with the manner in which we maintained our calm throughout the game, given our opponents showed to be really formidable in important areas. Kudos to everyone.”

After a physically demanding match, Chuene Morifi believes there is potential for improvement: “This was a very difficult game for us because Queens are a strong team in Nigeria with several players from the national team. Early on, we encountered some difficulties, but we were eventually able to get control of the game. We capitalized on our opportunities, and we are delighted with the outcome of the match. We are excitedly anticipating the next game.”

In the other Group B match, TP Mazembe defeated Wadi Degla FC courtesy of a goal by Merveille Kanjinga.

Mamelodi Sundowns Ladies’ next match is on November 3 at Stade de Marrakech in Marrakesh versus Wadi Degla of Egypt.