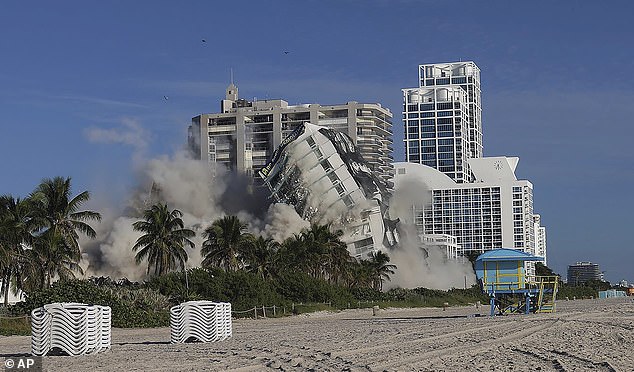 A once-luxurious Miami Beach hotel that welcomed the Beatles and John F. Kennedy during its prime in the 1960s was demolished on Sunday after falling into ruin and being abandoned for years.

Since the hotel’s inception in 1957, Kennedy, the Beatles, Frank Sinatra, Tom Jones, and Sammy Davis Jr. have all performed there or made special appearances.

The hotel even hosted one of The Beatles’ legendary performances for “The Ed Sullivan Show.”

The 17-story Deauville Hotel at 6701 Collins Avenue collapsed after a series of explosions sent a massive cloud of dust into the air. The hotel’s demolition began in March after it was ruled hazardous in 2021.

The facility deteriorated over the years and was shut down in 2017 due to an electrical fire. Officials of Miami Beach and the hotel’s family argued over millions of dollars in fines for different code infractions.

It is unknown what will occur with the magnificent beachfront property at this time.

The historic Deauville Hotel in Miami was demolished on Sunday, one year after it was judged unsafe.

On the beachfront, spectators watched from a safe distance while the structure was demolished.

The building was captured on film minutes before it collapsed within seconds.

The hotel at 6701 Collins Avenue was designed by Melvin Grossman in the Miami Modern style and opened in 1957.

The resort became famous in 1964 after The Beatles stayed at the 538-story skyscraper and played there.

In 2017, the Deauville was closed due to a fire in the electrical room and damage caused by Hurricane Ida.

In 2019, Miami Beach sued the resort’s owners, the Meruelo family, for neglecting the resort.

The Miami building and zoning department obtained a demolition permission earlier this year after the owners of the 538-room hotel submitted a report in December claiming it was hazardous.

The city began demolishing the hotel’s front entrance and iconic red metallic sign in March and then spent many weeks preparing to demolish the entire resort.

Stephen Ross, the owner of the Miami Dolphins and a millionaire New York developer, intended to purchase the property and construct a 350-foot-tall (107-meter-tall) hotel and condominium skyscraper, but this idea is now in limbo. The region has a 200-foot (61-meter) height limit, and a Tuesday vote on a local referendum that would have permitted taller construction failed.

Ross may still be interested in purchasing the property if an alternative solution can be devised, according to city officials.

After the hotel’s demise in January, the Deauville Miami Beach pool deck was abandoned. The hotel closed in 2017 due to a fire in the electrical room and damage from Hurricane Ida.

A vintage postcard depicts the pool deck of the resort in Deauville. The hotel opened in 1957 and afterwards welcomed numerous celebrities.

The resort at Deauville, which was once named Hotel of the Year, was established in 1957. The Miami Modern-style resort featured a large swimming pool, an ice skating rink, a beauty salon, a radio station, and a number of restaurants that catered to Miami’s elite.

Judy Garland, who performed at the Deauville in November 1961, was one of the celebrities attracted to the renowned hotel.

In 1961, Kennedy delivered a speech at the Young Democrats Convention.

In 1964, The Beatles appeared in the Deauville and recorded six songs for ‘The Ed Sullivan Show,’ attracting an estimated 70 million television viewers.

She Loves You, This Boy, All My Loving, I Saw Her Standing There, From Me to You, and I Want to Hold Your Hand were among of the Beatles’ most popular songs.

It was their second appearance on the show, following their debut in Sullivan’s New York City studio.

The Fab Four stayed on the 12th floor of the Deauville and nearly missed their introduction due to the crazed crowds that delayed their entrance from the hotel lobby to the Napoleon Ballroom.

In 1961, President John F. Kennedy delivered a speech to Democrats at the Deauville Hotel in The Magic City.

During their one and only visit to The Magic City, The Beatles performed at the Deauville.

The Beatles with police escort at Miami Beach’s Deauville Hotel