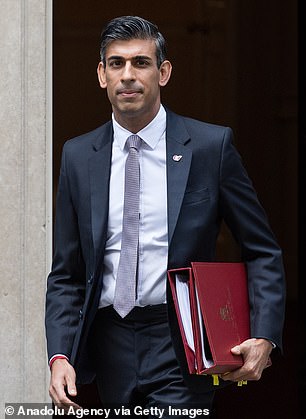 As Rishi Sunak and Jeremy Hunt attempt to balance the government’s accounts, a crackdown on high-income earners,’stealth’ wage increases for ordinary workers, and a rise in council tax all likely.

Prime Minister David Cameron and Chancellor George Osborne are reportedly “considering the unimaginable” as they feverishly search for ways to cover a £60 billion hole in the national finances.

There is speculation that next week’s Autumn Statement could include dramatic measures such as lowering the threshold at which individuals pay the highest rate of tax, or perhaps increasing the rate from 45p to 50p.

That would be a return to the level imposed by Labour in 2010, shattering Tory election promises, and it would be a major reversal from just six weeks ago, when Kwasi Kwarteng stated that the tax would be eliminated entirely.

While final decisions have not yet been made, government sources have indicated that a change in the threshold is more likely. According to the Treasury’s own calculations, going to a 50p rate would only generate approximately £750 million per year, and this amount would decrease as the behavior of high earners changes.

Mr. Sunak refused to guarantee at PMQs that there will be no real-terms cutbacks to schools. The majority of the tightening is expected to be comprised of eye-popping budget cuts.

The proposed £25 billion in tax rises will be largely the result of “stealth” raids caused by failing to update tax thresholds in tandem with rising inflation.

This brings millions of additional individuals into the tax system without actually raising taxes. Personal allowances, as well as capital gains and dividends, could be targeted for the wealthy.

In the meantime, officials are rumored to be considering allowing councils to raise taxes in order to prevent substantial cuts at the local level.

This would entail Mr. Sunak breaching another campaign pledge by abolishing the requirement that councils seek a referendum if they wish to raise taxes by more than 2.99%.

Rishi Sunak (left) and Chancellor Jeremy Hunt (right) are claimed to be “thinking the unimaginable” as they feverishly search for methods to plug a £60 billion deficit in the public budget.

Last week, the Bank of England provided a bleak forecast for the UK economy.

The triple-lock on public pensions may be maintained.
Benefits might be increased in accordance with inflation, as opposed to the lower pay figures that had been proposed.
Other than health, departments face spending allocations well below the inflation rate.
Next year, public sector compensation could be capped at just 2%.
Major investment plans, such as nuclear plants and HS2, raise concerns.

The income tax thresholds might be froze for a further two years, till 2027-28, drawing millions more individuals into the system.
The top rate threshold might be lowered, or the rate itself could rise from 45p to 50p.

The requirement that councils hold referendums on tax hikes exceeding 2.99% could be eliminated.
The inheritance tax level could be held in another “hidden” source of revenue.

Investment zones advocated by Elizabeth Truss were abandoned.
The dividend tax rate could be increased and the tax-free dividend amount reduced.

Capital gains tax exemptions and deductions paid on shares and second houses could be reduced.
The lifetime allowance for pensions might be froze for an additional two years, till 2027-28, at slightly over £1 million, its present rate being £1,073,100.

A source stated that the severe circumstances compelled Mr. Sunak and Chancellor Jeremy Hunt to “consider the unthinkable.”

Within days of assuming office, Mr. Hunt promised £32 billion in tax increases in an effort to calm financial markets. In addition to up to £35 billion in cuts, he is now planning an additional £25 billion in taxes.

Ministers have refused to rule out abandoning the triple lock on state pensions, allowing them to increase in tandem with earnings rather than the higher CPI inflation amount.

However, they are now being viewed as top priority by the prime minister, and both are anticipated to get price increases. The annual cost of £11 billion necessitates larger cuts to other departments.

The Chancellor is considering a capital gains tax assault, including a reduction of the tax-free allowance by half.

In the largest batch of stealth taxes in years, all income tax, national insurance, inheritance tax, and pension allowance thresholds will be frozen.

According to a Treasury source, the package was necessary to limit the skyrocketing prices that are wreaking havoc on household budgets.

The leading cause of suffering for millions is inflation, the hidden tax that eats away at paychecks, savings, and the monthly grocery bill. When inflation is strong, interest rates also rise, which drives up the price of mortgages and business loans. We must conduct battle against inflation.

There are no intentions to increase either the basic or 40p tax rate.

Ministers contemplated tightening pensions and benefits by increasing them in accordance with earnings rather than inflation.

The change would have resulted in a payout increase of 5.5% rather than 10.1% and would have produced annual savings of over £5 billion.

However, Work and Pensions Secretary Mel Stride strongly suggested yesterday that the government will attempt to avoid charges of targeting the poor by ensuring that pensions and benefits kept pace with inflation.

As a result of the likely choices next week, the Treasury has already warned that “everyone” will be required to pay more tax.

According to sources, the heaviest load would fall on individuals with the broadest shoulders.

A senior Conservative speculated that Mr. Sunak, who is rumored to be worth approximately £730 million with his wife, may be considering an increase in the highest tax rate to deflect criticism of his personal wealth.

“Rishi considers nothing without wondering, “How will this affect my appearance?”

” the source reported. A 50p tax rate will assist Trump in portraying himself as an enemy of the wealthy.

Sir Iain Duncan Smith, a former leader of the Conservative Party, cautioned, “It would be absurd to raise taxes further now in order to plug a fictitious hole in the budget in a few years.”

“All you would do is plunge us deeper into a recession, and the deficit will get much larger.” If we pursue this course of action, our goose will be cooked