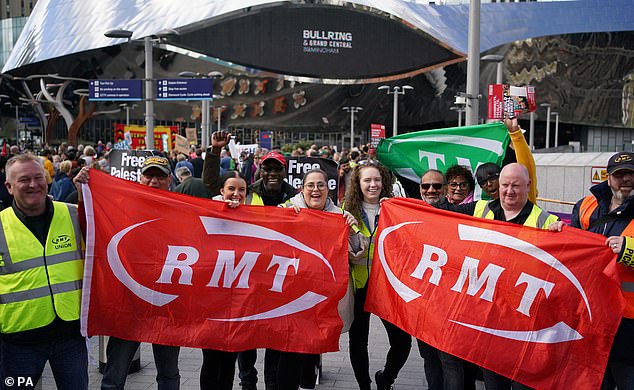 Last night, ministers were under increasing pressure to resolve the rail strike problem as data revealed that walkouts over the summer had cost the economy £600 million.

After the RMT union announced three 24-hour strikes over six days, there would be another week of pandemonium on the railroads.

On Saturday, Monday, and Wednesday, only around half of services will operate, increasing the total number of nationwide RMT-organized strikes to 11 since July.

Due to the knock-on effects, trains on Sunday, Tuesday, and Thursday may also be reduced by 25%.

Additionally, on Thursday, London Underground employees will go on strike, paralyzing the city’s transportation system for the sixth time this year.

Families celebrating bonfire night will be affected, as will sports enthusiasts over a weekend crammed with football games. Rural regions will also be entirely cut off.

In the absence of an agreement, union bosses have threatened to wreak havoc until next summer, so governments are under pressure to be harsher to prevent more economic harm in the face of an impending recession.

Mark Harper, the transport secretary, said on Wednesday that he was “quite glad” to meet with the leaders of the train unions and “listen to their concerns.”

But he asserted that he would not get involved and that negotiations between the unions and employers, namely Network Rail and 14 railway firms that serve the majority of England, would continue about salary and job security.

He should consider hastening laws requiring unions to guarantee that a proportion of trains operate on strike days, according to Tory MPs.

The “minimum services” law, which already exists in a number of European nations, was presented to Parliament last month but won’t go into effect until the following year.

On most routes, it is anticipated that at least 20% of services would need to operate during walkouts, although this number might reach 40%.

When the RMT and Aslef unions joined forces to strike last month, just 11% of trains operated, entirely cutting off many rural regions.

Greg Smith, a Tory member of the Commons transportation committee, declared: “We must move quickly to pass the basic service legislation… Additionally, union leaders must cease expelling so many workers while playing with the future of the railroads.

When the dates for the following week are taken into account, a study by the think tank Centre for Economics and Business Research revealed that the walkouts had cost companies and the economy about £600 million since July.

Additionally, there are increasing concerns that when the next round of strikes is announced, union bosses may single out Christmas and New Year’s.

“Our railroads badly require modernization, and we must all work together to make this happen,” a Department of Transport official stated.

The Transport Secretary has made it plain that he intends to meet with unions and hear their concerns.

“We implore them to think twice before dividing action.”