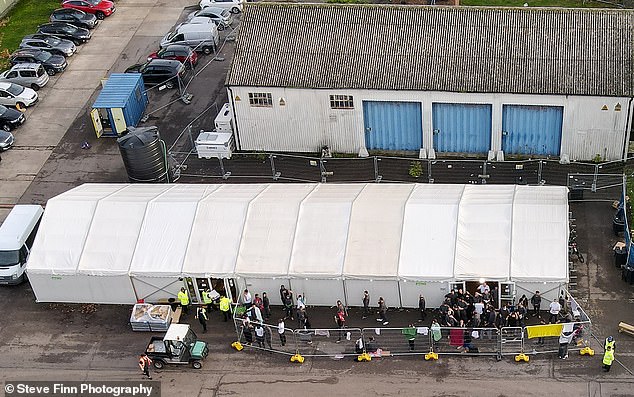 This disturbing image depicts the first taste of British life for thousands of illegal immigrants who crossed the English Channel and slipped into the country.

Outside a tent at an overcrowded Home Office camp in Kent, unhappy young men are confined behind steel bars.

They live in close proximity to one another in these tents, with laundry thrown over the fences and empty food containers littering the ground.

The scenes are reminiscent to the previous Calais slum known as the “Jungle.”

On Thursday, when the photograph was taken, whistleblowers from the camp informed the Daily Mail, “Fights have erupted between Albanians and Eritreans using combs from their Home Office washbags as weapons.”

They stated, “A small Army detachment is on the premises to maintain order.” According to reports, riot police are standing prepared to intervene if the migrants revolt over the next few days.

It is a powder keg. Migrants have assaulted Border Patrol agents and security personnel, who are terrified and outnumbered.’

The closed camp, located on a former RAF base in Manston, is the primary processing center for illegal boat migrants before they are distributed to hotels and hostels throughout the United Kingdom.

The facility, which opened about a year ago, is designed to hold up to 1,600 offenders for a few days while their identities are verified prior to rehousing.

As a result of this year’s spike in the number of migrants crossing the Channel, the number has already reached 3000. Staff from the Border Patrol have warned of “catastrophic” overcrowding.

Monday, during an inspection, the head of immigration warned members of parliament that conditions are “appalling.”

Today, The Mail can reveal that the depressing and deteriorating condition of the camp has forced traffickers to alter their strategies to prevent their migrant clients from being brought to Manston.

Yesterday, an advertisement posted on Albanian websites warned individuals in Dunkirk, “Do not put your life in jeopardy.” Belgium to the United Kingdom by speedboat in forty minutes. The lowest price starting the day after tomorrow. We ensure a safe crossing and will not spend a single night in [Manston camp].

When our reporter pretended to be a migrant seeking to travel, the advertisement sent a text message stating that the speedboat trip costs £11,000 and is “100% successful.” The Albanians arrived in Britain by motorboat from Belgium on Thursday and Friday, he claimed. “The trip takes less than an hour,” he remarked.

In a startling development this week, the Home Office is rumored to have proposed constructing tents in London parks to accommodate migrants after regional councils rejected an emergency appeal from the government for a larger share of the burden to alleviate the mounting crisis at Manston. Yesterday, the Home Office stated that the proposal was no longer being considered.

According to our sources, the entire Manston camp is disorderly and hazardous. Border Patrol and internal security teams cannot handle the influx of individuals. Things are deteriorating daily. Numerous migrants have fled.

“Mini-riots have occurred when migrants arriving on boats at Dover, before even reaching Manston, refused to consume non-halal kebabs.

In the event that occurred a few months ago, Border Force, immigration officials, and charity workers were spit upon, verbally harassed, and their meal was tossed to the ground. Thus, all affection was irretrievably destroyed. Existence of a culture of apathy, and sometimes antagonism, between Manston workers and migrants is worsening the situation.

‘It is dawning on these individuals that life in our country is not what they were led to believe by the traffickers, and this realization angers them. They have paid for the passage, but realize there is little chance that their claim for asylum will be reviewed swiftly, let alone approved.

Currently, 100,000 asylum applicants are awaiting a hearing on their applications, a number that is increasing everyday. A minute fraction of the cases were handled last year, leaving a massive backlog of migrants in hotels, hostels, and temporary housing around Britain at a daily cost of £7 million to taxpayers.

According to the sources, the government has a “deliberate conspiracy of silence” over Manston. Everyone who works there is required to sign the Official Secrets Act, and they fear telling the truth for fear of being taken to court.

This week, while the Mail probed the camp’s treatment of migrants, another whistleblower approached us. As the number of refugees increased, the Home Office reportedly rented a variety of canvas marquees from event firms and housed 150 people per tent in the fall.

Some, in an attempt to get fresh air, cut themselves out with the razor-sharp combs of the wash bag. A few escaped entirely through the boundary fences.

The whistleblower continued, “Migrants are now permitted to enter pens outside of the tents.” They are supervised by security personnel wearing yellow high-visibility jackets who might be easily outflanked if a disturbance broke out.’

Another individual with ties to the camp disclosed, “An Albanian made his way to a nearby McDonald’s wearing Home Office-mandated slip-on sandals.” Migrants are required to wear them as a deterrent from attempting to flee Manston since they are so difficult to walk in. This man, however, made it to the café and was pointing at a screen in an attempt to get a burger when staff alerted the camp and Army soldiers brought him back.

This year, around 38,000 boat migrants have arrived in Kent, 12,000 of whom are Albanian. This week, government leaders acknowledged that this country has lost between 1 and 2 percent of its male teenage and adult population to the United Kingdom.

Many Albanian illegal immigrants, afraid of being transported to Manston and detained there for weeks or months, dodge both Border Force personnel and lifeboat rescue vessels in order to sneak onto British beaches undetected. To clear debts for the £4,000 dinghy journeys, Albanian traffickers headquartered here pick them up in getaway cars for black-market labour, notably at cannabis plantations.

As the Mail reported earlier this week, Dover district council has warned residents in the suburb of Aycliffe to lock their doors after a 16-year-old Albanian, who had recently landed on the beaches, entered a house over the weekend and confronted Sue Doyle, 59, a lone woman, demanding money, a phone, and help locating a ‘getaway’ car waiting nearby to drive him to Manchester.

Miss Doyle’s alerted neighbor rushed into the house, saw him hiding in the bedroom, and “grabbed him by the scruff of the neck.” The migrant fought his way free, but by then the police had arrived and taken him away for interrogation.

They informed a shocked Miss Doyle that no crime had been committed. Meanwhile, at the densely populated Manston, illnesses such as scabies and the potentially fatal diphtheria have spread.

This week, it was seen that ambulances entered and exited the site. Migrants informed us, “We ate chips and packaged croissants.” We were unable to sleep because we were only given a thin blanket and no mattress or pillow. It was disrespectful treatment. We believe it is intended to discourage our attendance. We slept on the hardwood floor of a 300-person brick building.

There was just a two-foot-wide hallway leading to the restrooms because there were so many of them so close together. We feared being unwell, and some of us, including a young Albanian girl, were really ill. However, no one phoned a physician.

This week, the Home Office stated, “The persistent increase of perilous small boat crossings is placing an unprecedented pressure on our asylum system.” Manston is equipped to securely process migrants, and we will supply replacement housing as soon as feasible.

People who are contemplating leaving a safe nation and risking their lives at the hands of people smugglers [on Channel boats] are urged to rethink.

As things stand this weekend, the traffickers are outsmarting the British government, and it appears unlikely that this request will be heard.