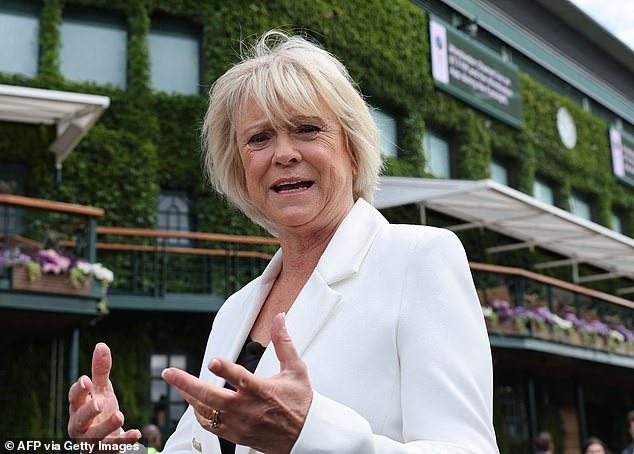 She has said that she will not be presenting the BBC’s coverage of Wimbledon from SW19 after this year.

But once it was discovered that Sue Barker had laryngitis, she may be pushed into an early retirement.

Miss Barker, 66, admitted she had trouble speaking with a croaky voice, casting doubt on her final appearance.

She completed her required number of presentations yesterday, and the symptoms often go away on their own in two weeks.

When the Mail approached Miss Barker, she said, “I have laryngitis, therefore I’m trying to conserve my voice [for transmission].”

After 30 years of dazzling the screens of the country, her farewell match is scheduled to be the men’s final on July 10.

As the face of BBC coverage, Miss Barker has also hosted the Olympics, Commonwealth Games, and Grand National.

She previously acknowledged that her mother’s passing at the age of 100 this year had a significant role in her decision to decline a three-year extension offer from the BBC.

My mother was always very interested in my profession in radio, and we spoke every evening, the woman stated.

“When something like that occurs, it does cause you to reevaluate your life. This is another reason I believe the timing is perfect.

A BBC spokesman said: ‘There are no plans for Sue to take a break and she’s poised for the Centre Court celebration [of its centenary] on Sunday.’