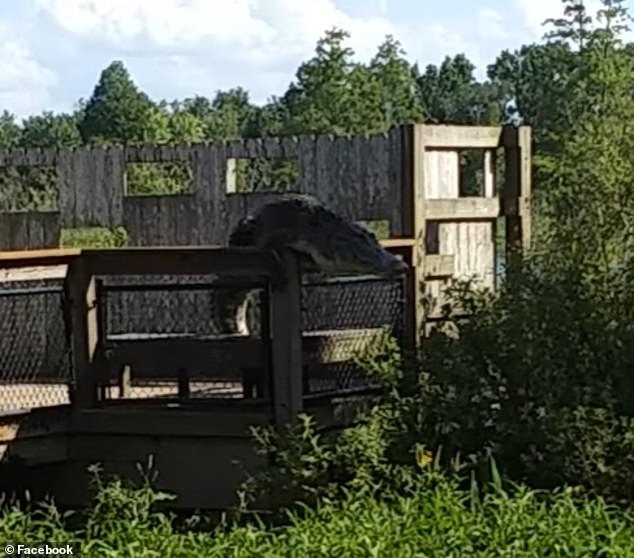 A stunned Florida hiker spotted a huge eight-foot alligator climbing over a chain-link fence before it disappeared into a murky swamp.

Lavonne Phillips, of Bartow, was hiking through the Circle B Bar Reserve when she noticed the alligator climbing over the fence and back into the swamp on May 4.

The scary part, Phillips said, was that she didn’t even notice the apex predator behind her until she heard a ‘heavy clomping sound.’

‘I didn’t actually spot the big gator, that’s the scary part. I had my back turned to the opposite side of the bridge and stopped to look at a great blue heron when I heard the noise.

‘So I turned around and saw him halfway up on the bench inside the fenced area where [humans] usually are. [And I thought to myself]: “How did it get there? Did we walk past each other? Did it walk behind me when my back was turned or was he already there?”‘ she told the Miami Herald.

The 20-second video she posted to her Facebook feed shows the large animal climbing on the bench, slowly putting one paw in front of the other as it leveraged itself up to the railing.

Eventually, the alligator hooks his arms around the railing and nosedives into the swamp surrounding the bridge.

Phillips said the silence afterward was discomforting as she and another hiker were unsure where the gator would pop up next. Eventually, they found the animal hiding under the bridge.

‘We walked out on the fenced area to look for it and it was sitting right there, hissing just under the bridge,’ Phillips told the Miami Herald.

The native Floridian said she thought the experience was ‘cool,’ but still found herself being more aware of her surroundings afterward, even if she has ‘seen a lot of gators’ in her time. She said: ‘Seeing the climb and the strength and willpower, I walked away more cautious.’

Although it is uncommon for alligators to climb high objects, such as fences or trees, the animal does have the ability to do so. The reptile can climb ladders, staircases, trees, and fences with ease, according to Experience Kissimmee Florida, a Florida travel guide website.

In addition, the scary reptiles can even jump five feet in the air. They use their tails to push themselves off the ground and typically jump to gather food from low hanging branches, the travel guide website said.

A whopping 1.3million gators are roaming the wetlands of Florida across 67 counties, according to the Florida Fish and Wildlife Conservation Commission (FWC).

The largest gator ever to be found in the sunshine state was more than 14 feet long and the weight record is 1,043 pounds, according to the FWC.