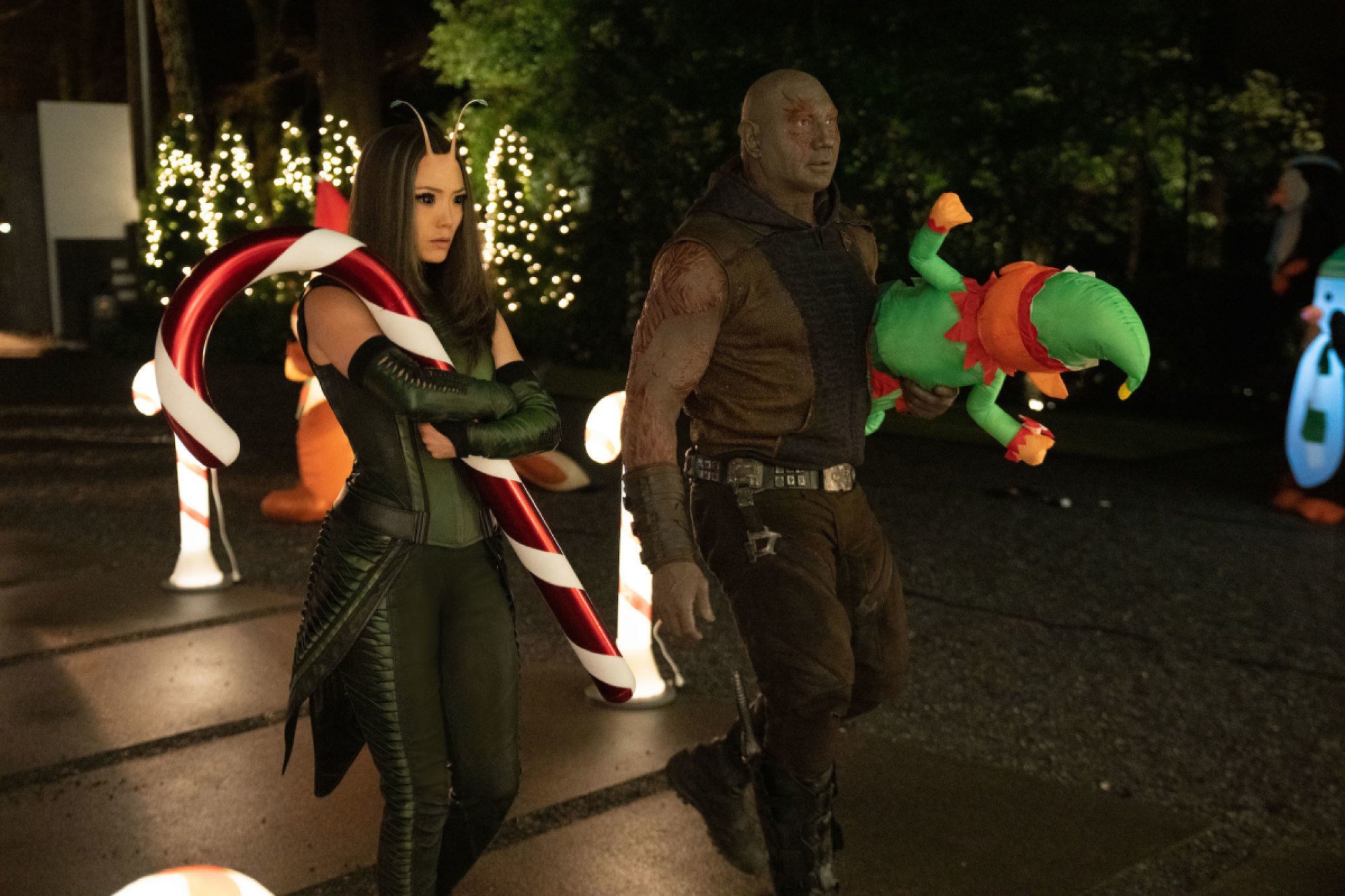 In The Guardians of the Galaxy Holiday Special on Disney+, Marvel Studios’ oddest and craziest superhero team returns. This is the genuine article: a Christmas tale written and directed by James Gunn and featuring all of the cast from the feature picture… plus Kevin Bacon. But is Marvel Studios’ first Christmas special (excluding Hawkeye, which was a holiday series) out of this world? Or did Kevin Feige leave us with nothing?

The Gist: It’s Christmastime on Earth, which generally means jack squat if you’re camping on a floating celestial head in the middle of nowhere. Peter Quill, an interstellar superhero, has a difficult time keeping track of his home planet’s holidays (Chris Pratt). In addition, according to Kraglin’s (Sean Gunn) account, Peter’s Christmas was destroyed forever by a large blue Scrooge named Yondu (Michael Rooker, who appears in animated wraparound segments done in a kinda unsettling Ralph Bakshi style). Mantis (Pom Klementieff) and Drax (Dave Bautista) come up with a brilliant, terrible plan after learning about Christmas and how Peter’s kidnapper/father figure tossed his improvised Christmas tree into a space dustbin. They will go to Earth and bring Peter the best present of all: Kevin Bacon, his hero.

Yes, Peter Quill will receive Kevin Bacon for Christmas. This is where the peculiarity begins, and it just escalates from there.

What Movies Will It Remind You Of? : Obviously the Guardians of the Galaxy films, as almost everyone involved with those films was also involved with this special (it was filmed simultaneously with next year’s GOTG v3 feature). On the Christmas front, though, there is a surprising lot of Buddy the Elf in this one… if Buddy were bulletproof, extremely powerful, and one of the deadliest beings in the universe. Nonetheless, the GOTG Holiday Special resembles Elf’s fish-out-of-water chaos, albeit amplified to 11, and it shares Elf’s unflinching earnestness.

Mantis, portrayed by Pom Klementieff, is the true star here, as she is effectively the protagonist of the entire show. After stealing many sequences in Guardians of the Galaxy Vol. 2 and Avengers: Infinity War, we are finally get to spend a significant amount of time with her. We see her humorous side, her furious side, and — for all you Marvel Comics experts — we finally get to see MCU Mantis with the master martial arts abilities that were so important to her character in the 1970s comics. Also, may I point out how brilliant it is to concentrate a Christmas special around a woman that is both an empath and a literal cheerleader (when she wants to be)

Since I can’t cram 39 minutes of dialogue into this part, I’ll emphasize the point when we hear Karen Gillen’s Nebula exclaim in a gravelly voice, “You can’t outrun me, Bacon!”

Peter Quill attempted (and failed) to establish a holiday tradition with the Ravagers when he was first taken by them, but Yondu had a tantrum since Ravagers don’t do gifts and don’t accept handouts (eyeroll).

Two Turtle Doves: You’ll need to travel back in time to find the appropriate companion piece to this special, and no, it’s not the Star Wars Holiday Special. Season 4, Episode 17 of the 1990s animated X-Men series is available on Disney+. You won’t regret it.

Yes, the title is comprehensible. It might have riffed on the “vol.” riff that filmmakers are utilizing and named itself after an album. Christmas in the Stars, Presented by Guardians of the Galaxy? False, this is a holiday special to the core.

Our Take: I loved it. Done. Oh – must I write more? This particular is an easy target for me. The Guardians is my favorite sub-franchise of the Marvel Cinematic Universe, I adore Mantis, I like Christmas, I adore Christmas specials, I adore Christmas music, and I particularly adore Christmas specials that embrace emotion and sincerity without reservation. When it was announced that Gunn would be writing and directing this special, it made perfect sense: so much of Gunn’s work in these superhero universes involves locating the emotional core of a story and the heart of the characters before amplifying them through jokes, rock songs, and unfiltered moments of emotion. In summary, Gunn has always has the necessary ingredients for an instant classic Christmas special.

The Guardians of the Galaxy Holiday Special exceeds expectations in every way. As someone who becomes quite emotional whenever he observes folks being really impacted by Christmas light displays, this program appealed to me. The special gives the impression that Team Holiday Sincerity has won. Is the majority of this program utter craziness, such as the prolonged segment in which Drax and Mantis pose for visitors on Hollywood Boulevard? Certainly, but never in a cynical or disingenuous manner. These characteristics are what make masterpieces feel like classics, and this special possesses them. The purpose for the season is togetherness, kindness, fellowship, love, family, and giving – all that mushy stuff, and Mantis is attempting to express these sentiments by snatching Kevin Bacon from his Hollywood home.

And true to the flicks, Gunn’s music selections are spot-on, such as Gunn’s placement of The Waitresses’ “Christmas Wrapping” in the special or Gunn’s usage of Smashing Pumpkins’ undervalued “Christmastime” as the emotional center of the entire dang thing. Again, similar to the Elf soundtrack, this feels like the Christmas playlist that the filmmaker has been listening to on Spotify, his iPhone, his iPod, his Discman, and his Walkman… he has now made us a copy. Or I assume sent us a link. Regardless, I desire this soundtrack on vinyl.

As with everything else in the MCU, it’s easy to view a Christmas special as needless, overdone, and commercialized. The same may be said for Christmas. However, I believe that both Christmas and this special will reveal what you bring along. You can view it as a waste of time and bah humbug it, or you can let down some of the defenses you carry with you throughout the year and experience some of what someone individual is sincerely sharing. I’m helpless, y’all. I’m a believer.

Our Request: STREAM IT. This is the finest holiday present Marvel could have given us.

»Streaming or Skipping: Disney+’s “Guardians of the Galaxy Holiday Special” is a Marvelous Christmas Present«