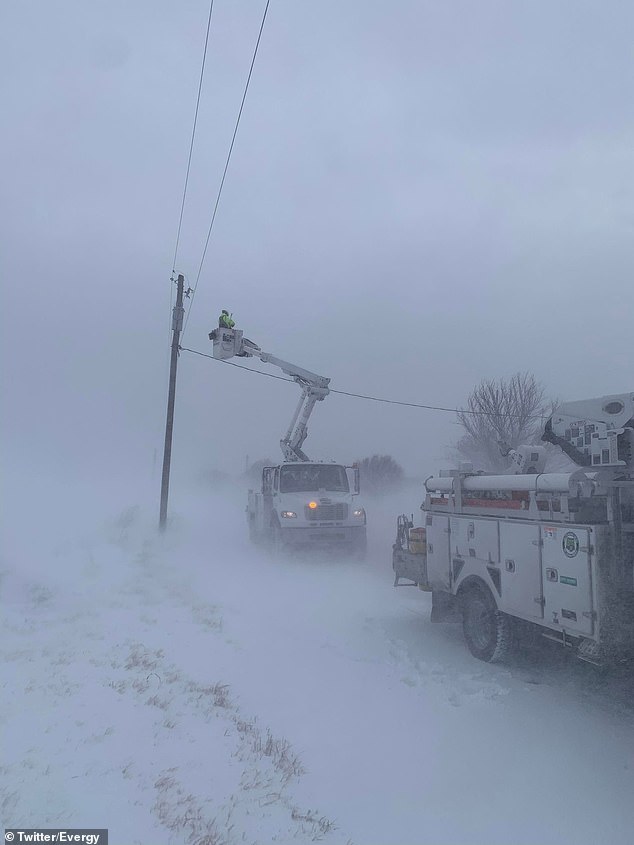 A power transformer erupts into sparks on a roadway in Missouri at this terrible moment as ferocious winds and subfreezing temperatures sweep through the Midwest.

On Thursday night, just outside of Kansas City in the Liberty area, an electrical box explosion caused a massive explosion that lighted up the night sky like fireworks.

After the electricity went out, adjacent buildings became completely black while the outside temperature fell to bone-chilling levels.

As the massive storm passed through, more than 2,000 customers were affected, leaving homes in a snowy and icy region without heat. The winter weather has caused widespread turmoil, leaving more than 1.5 million people without electricity nationwide.

As the wind chill dropped to an astonishing – 32 degrees on Thursday night, crews were fast to reach the explosion scene on Highway 291.

In certain areas of the state, the wind chill was expected to reach a low of minus 24 degrees on Friday.

Six states, including New York, have declared state emergencies as the storm moved east overnight and into Friday morning.

Two-thirds of the nation is now experiencing some kind of severe weather warning, including strong winds, floods, and sharp temperature dips.

Around 12,000 Midwest customers lost power as a result of the storm, 8,000 of them were in the Wichita, Kansas, region, according to energy firm Evergy’s report on Thursday.

According to a report out of Topeka, the neighborhood’s electricity went out the day the storm passed through at 5.30 am.

As the temperature dropped below zero, Evergy technicians arrived on the location at 7.30 am and had electricity restored by 10.45 am.

As the storm moves from state to state, it has been claimed that accidents and at least six fatalities have occurred throughout the US, severely interrupting millions of Americans’ holiday travel plans.

Up to two-thirds of US flights might be postponed or cancelled, according to predictions. On Friday morning, several bus routes and Amtrak train service reported alterations and cancellations throughout the nation.

Another 3,000 US planes have been canceled and over 10,000 have been delayed only on Friday.