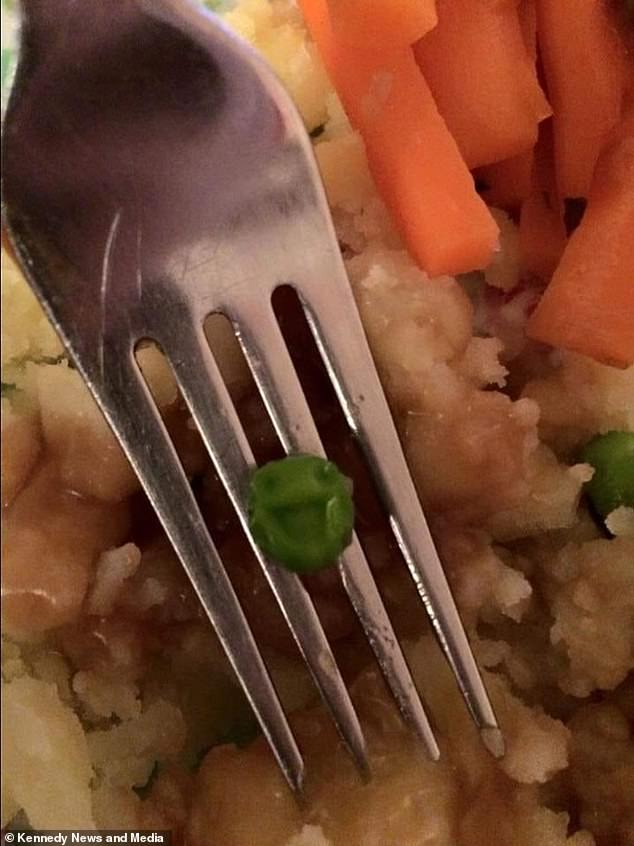 A hungry retail worker was shocked to see the “happiest pea in the world” smile back from her fork, but ate it nonetheless.

Kimberley Ross was enjoying a roast chicken supper prepared by her mother, Donna Ross, when she noticed a “smile” peeking out from beneath some veggies.

The 34-year-old store employee was ecstatic to discover a ‘face’ on the pisum sativum, complete with two eyes and a broad smile.

After taking a quick photo to show her friends and family, Kimberley devoured the nutrient-dense vegetable because she had “already eaten his parents” and didn’t want to leave him “orphaned.”

Kimberly Ross, a Warwickshire shop employee, saw this pea while eating dinner with her mum before Christmas. She considered photographing the vitamin-rich veggie prior to consuming it.

Ms. Ross, pictured, never considered conserving the pea for future generations because she had already consumed the pea’s “mother and father,” leaving it an orphan.

Kimberley stated that seeing the cheerful-looking vegetable “brightened her day” and posted a picture of it on social media on December 20.

The post titled “the world’s happiest pea” received about one thousand likes, shares, and comments on social media.

Kimberley from Leamington Spa, Warwickshire, stated, “We were seated in the living room, and I was carrying the tray with the lunch.”

I happened to look down and noticed a portion of the pea’s mouth. I thought, “That definitely looks like a face.”

It was peering up at me with the largest grin on its face when I exposed it.

“I had to show everyone in the room, so I snapped a photo.”

It brought me great joy to see it; it made my day.

Ms. Ross, pictured on the right with her partner Jaime Timms, stated that she was on the lookout for faces in other foods.

Ms. Ross, pictured with her boyfriend Jaime, left, and her parents Pamela and Martin, stated, “I did consume the pea.” I could not abandon him because I had already devoured his parents.

Kimberley, whose partner is Jaime Timms, a 27-year-old NHS employee, said that after spotting the ‘happy’ pea, she is now on the lookout for other amusing expressions.

Kimberley remarked, ‘I’ve never had anything like it before, and ever since, I’ve been on the lookout for small faces on objects.

“I did consume the pea. I had already consumed his parents, so I could not abandon him.

Kimberly uploaded the image on Facebook, where ecstatic social media users commented on how joyful it appeared.

Someone else remarked, ‘That’s adorable.’

One author stated, “I’m sure he thought he escaped without being eaten.”