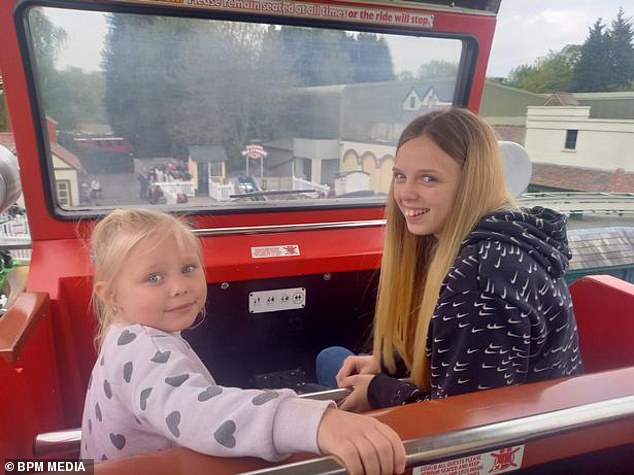 A ‘devastated’ stepfather stated that he is ‘in pieces’ following the death of his 14-year-old stepdaughter in a car accident.

Tehleigher Bunting, age 14, was killed when a Vauxhall Astra drove off the road and struck her and a friend as they walked on the sidewalk.

When the vehicle exited the road shortly before 11 a.m. on Wednesday in Braunstone, Leicester, the ‘bubbly’ teenager tragically died at the scene.

The second 14-year-old girl sustained injuries that were not life-threatening.

Today, the driver of the vehicle, 38-year-old Aaron Carter, appeared before the Leicester Magistrates’ Court on a charge of causing death by dangerous driving.

Shane Patterson, Tehleigher’s stepfather, stated that she was ‘well-liked’ by all, always placed others before herself, enjoyed spending time with her family, and was maturing into a young woman.

At such a difficult moment for him and his loved ones, he has been rendered speechless by her death, unable to find the appropriate words.

But he also spoke eloquently of Tehleigher’s memories, how she was a compassionate, vivacious young woman who cherished life and the people she shared it with, and how she left an indelible mark on everyone she met.

Mr. Patterson remarked, “She was cheerful and vivacious; she could not do enough for others and always put others before herself.”

She was so well-liked and had so many friends who have reached out and expressed their admiration for her.

She was such a family girl and had a close relationship with all of her siblings; one of her favorite activities was caring for and protecting her sisters.

‘However, she was also a teenager, so she enjoyed getting her nails done, was becoming interested in makeup, and was maturing.

She was a very well-liked young person, and words cannot express how I feel about her passing.

She excelled in school, possessed attributes, and was an exemplary student. The fact that past professors and former classmates contacted us and contributed to the burial fund demonstrates how much she was cherished.

Today, 38-year-old Aaron Carter appeared in Leicester Magistrates’ Court on a charge of causing death by reckless driving in connection with an incident that occurred at the intersection of Braunstone Lane and Mortimer Way shortly before 11 a.m. on Wednesday.

Tehleigher perished in the collision, while the second youngster sustained non-fatal injuries.

Carter, of Aikman Avenue in Leicester, entered no plea. He was remanded in jail to appear on December 5 at Leicester Crown Court.

A family friend organized a fundraiser to help Shane and his family pay for Tehleigher’s funeral.

It has resulted in people from all around the world contacting the family to share their love and provide their support at this tough time.

Mr. Patterson remarked, “So many generous people have come forward from everywhere.” She was so beloved that friends and family from all over the world have been reaching out to express their condolences.

“We are very appreciative of everyone who has come forward and supported us. Some of them we don’t even know, but our daughter had such an impact on their life that they felt compelled to come forward.

“It continues to pour in from as far away as Australia. We are extremely appreciative of the affection they have showed.

The family is still attempting to come to terms with Tehleigher’s untimely death, and they are relying on one another for support as they struggle to fathom the circumstances surrounding her passing.

What has occurred is simply not registering with me. One minute I feel fine, and the next I’m in shambles. I’m still trying to comprehend what occurred and that she is no longer here.

‘I’m heartbroken, we’re being consoled by those around us, but I just can’t grasp what has occurred right now.

Zoe, her mother, has taken it very hard, and I’m doing my best to be realistic by arranging the burial and keeping the family together, but it’s difficult.

Mr. Patterson also commented about developing close to Tehleigher and spending a great deal of time with her in recent months as she matured and developed her hilarious sense of humor, which always made him chuckle.

He stated, “Tehleigher and I used to have this thing where she would stick her tongue out at me, and I would do the same to her, and we would giggle about it. She had a wicked sense of humor and could make you laugh at any moment.

She was my adoptive daughter, but she was also my daughter whom I had raised from the time she was one year old and in diapers until she became a young woman.

“Over the past year or year and a half, we have become really close. She consistently spent time with me. I saw she was growing older and required a different approach than her younger siblings.

“Therefore, we traveled everything together, including family visits, amusement park excursions, and even a vacation to Cyprus.” We were meant to take a two-week cruise through the Canary Islands together next year, but that will no longer occur.

Mr. Patterson has expressed his appreciation to individuals who have contributed to the burial fund for Tehleigher’s family, which has nearly reached its aim of £6,000. He stated, “I cannot thank everyone enough for their donations.

“Every penny will be spent on my beloved child’s funeral expenses. Thank you for facilitating our ability to do so correctly.

»Stepfather pays tribute to 14-year-old girl killed in crash, saying he is “devastated”«