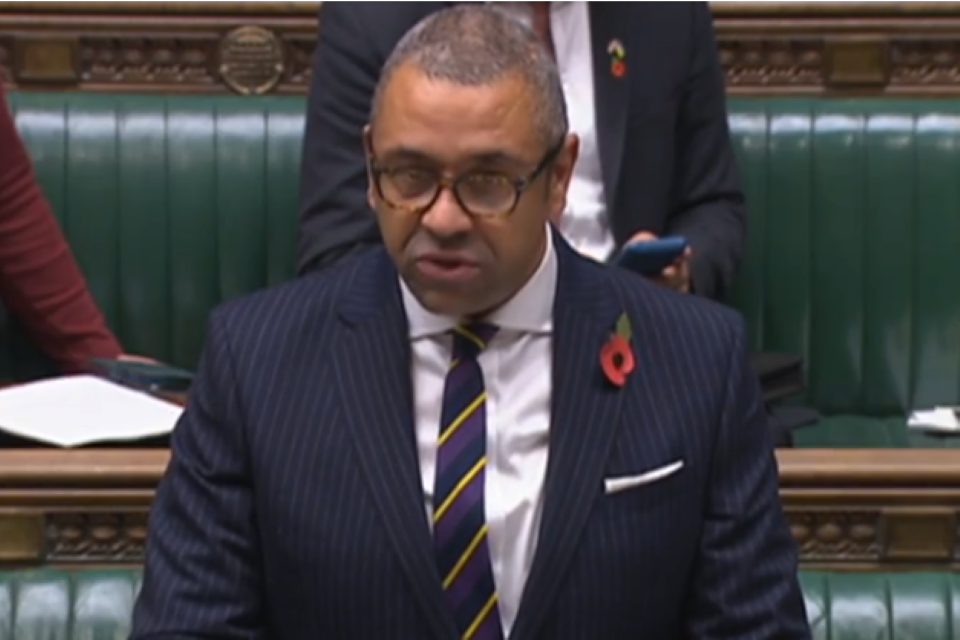 Mr. Speaker, with your permission, I would like to provide an update on the situation in Ukraine.
This morning, Russian missiles again targeted Kiev and other Ukrainian cities, devastating vital national infrastructure and depriving the population of water and electricity.
In a conversation with our Ambassador in Kyiv earlier today, I was reminded of the incredible resilience of the Ukrainian people in the face of Russian assault.
Russia terminated its participation in the Black Sea Grain Initiative over the weekend, which permitted the export of 100,000 tonnes of food every day, including to some of the world’s least developed nations.
Putin is exacting retribution for his military failures on the residents of Ukraine by cutting off their electricity and water supply, and on the world’s poorest people by threatening their food supplies.
Over sixty percent of the wheat exported under the Black Sea Grain Initiative went to low- and middle-income nations, such as Ethiopia, Yemen, and Afghanistan.
It would be inexcusable for these regions to suffer as a result of Putin’s military losses in Ukraine.
I encourage Russia to cease obstructing this critical program that helps feed the world’s hungry and to agree to its extension.
In the meantime, Russian suicide drones and cruise missiles are killing Ukrainian residents, damaging their homes, and even destroying a playground for children.
A third of the nation’s power plants were rendered inoperable in a single week.
None of this serves a military function.
Putin’s sole objective is to instill fear and deprive Ukrainian households of shelter, light, and heat as the hard winter approaches.
I am confident that the entire chamber will join me in criticizing his violations of international humanitarian law.
I am confident that every honorable and right honorable member shares my view that Putin will never break the Ukrainian people’s spirit.
And the House will share my astonishment at Putin’s mind-boggling contradictions.
He asserts that Ukraine is a part of Russia and Ukrainians are Russians, but considers them Nazis who must be mercilessly blasted.
When he started his invasion, Putin was certain that Russian forces would be welcomed in Kiev and that the Ukrainians would either support him or be too cowardly to oppose him.
He couldn’t have been more incorrect.
The last eight months have revealed the magnitude of his error in judgment.
They illustrated the brutality of his assault, including the widespread rapes committed by Russian soldiers in Ukraine.
The battle to prevent sexual assault in conflicts in the United Kingdom is more critical than ever, and I will organize a conference on this crucial topic next month.
And now the Kremlin has resorted to peddling bogus allegations, churning out fabricated stories that speak more to the internal divisions of the Russian leadership than to us.
Iran’s violation of UN Resolution 2231 by supplying Russia with the Shahed drones that are causing havoc in Ukraine is equally abhorrent.
The government imposed sanctions on three Iranian commanders and the business that makes Shahed drones on October 20 for selling weapons to Russia.
Earlier, on September 30, Putin stated that Russia had acquired four regions of Ukraine totaling 100,000 square miles, the largest territorial grab in Europe since World War II.
This again reveals his self-delusion.
Putin has declared the annexation of territory he has not won, and he is in the process of losing the territory he has seized.
On October 12, 143 nations, or three-quarters of the United Nations membership, voted in the General Assembly to condemn the annexation.
Russia has only four allies: Syria, Belarus, Nicaragua, and North Korea. When these four regimes are your sole allies, you are truly isolated.
When 141 countries condemned Putin’s invasion of Ukraine in March, some questioned whether that represented the limit of international support for Ukraine.
The most recent vote demonstrated that even more states are now willing to censure Russia.
Putin continues to believe that we would lose our determination if food and energy prices are artificially increased.
Our mission is to disprove his claims.
We will remain steadfast in our support for the right of the Ukraine to self-defense.
I conveyed this message emphatically to my Ukrainian counterpart on Tuesday, and my Right Honourable Friend the Prime Minister sent the same message to President Zelenskyy, the first foreign leader he phoned upon assuming his position as Prime Minister.
On Thursday, I will be in Germany for a meeting of G7 foreign ministers, where I will transmit a unified message of our common resolve.
This year, the United Kingdom has provided Ukraine with more military aid than any other country in the world, excluding the United States.
We will offer Ukraine with further assistance to rehabilitate its electricity infrastructure and have pledged £220 million in humanitarian assistance.
The House will have taken note of Putin’s irresponsible comments regarding nuclear weapons and the ludicrous claim that Ukraine intends to launch a radiological “dirty bomb” on its own soil.
No other nation discusses nuclear weapons. No nation poses a threat to Russia or to President Putin. For the United Kingdom and our allies, any use of nuclear weapons would profoundly alter the essence of this fight. Russia would suffer terrible consequences.
And how counterproductive would it be for Russia to violate a norm against the use of nuclear weapons that has existed since 1945 and supported world security?
Nothing can sway our belief that Ukrainians have the right to live in peace and freedom on their own country.
If Putin were to succeed, all expansionist tyrants would be empowered to commit atrocities, and no nation would be secure.
This is why we stand with our Ukrainian allies and will continue to do so until the day inevitably arrives when they triumph.
I commend this statement to the House, Mr. Speaker.

»Statement on Ukraine by Foreign Secretary«