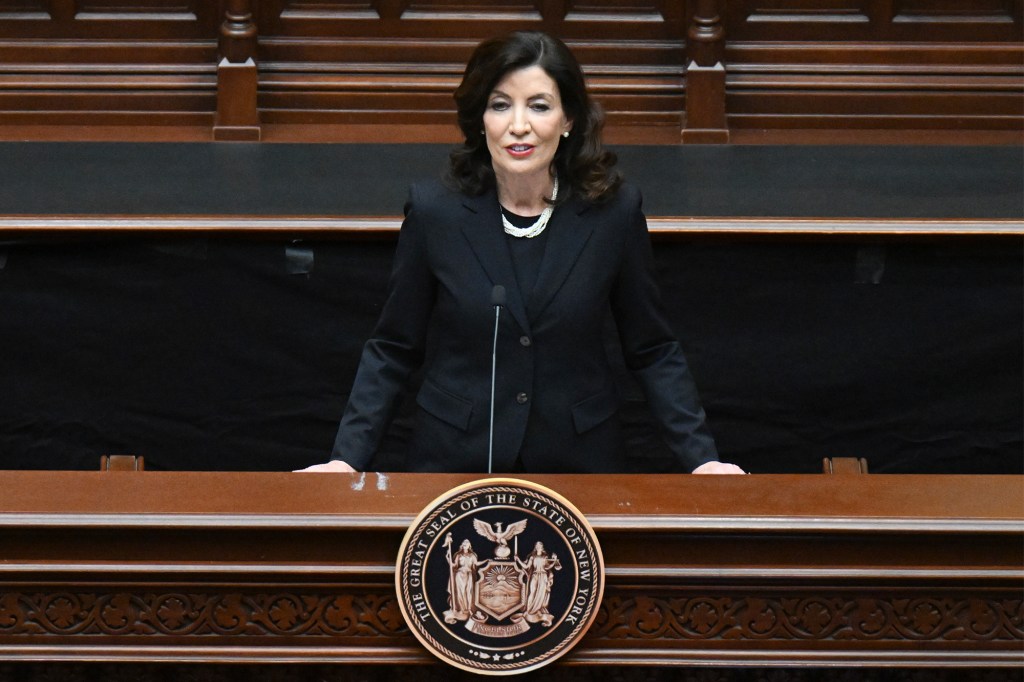 In her first State of the State Address after being elected New York’s chief executive in her own right, Gov. Kathy Hochul pledged to work with the Legislature, despite lawmakers’ efforts to block her candidate for chief judge. In summary, she has not yet displayed any sign of aggression.

She demonstrated that she had understood voters’ concerns about crime by stating, “Public safety is my number one priority.” However, her only actual ideas for reforming bail are fairly small tweaks, and nothing as radical as permitting judges to evaluate “dangerousness” as they do in every state.

Worse, in an obvious attempt to please progressives, she emphasized that bail reform is not the major cause of crime before stating that she wants to “have a thoughtful conversation during the budget process about how we can improve the law.”

This is a suggestion that she may hold lawmakers’ spending aspirations hostage in exchange for significant reforms, but she went on to describe small amendments to allow courts more authority to remand defendants suspected of major crimes.

Yes, “dangerousness” is a red signal for the progressives in the legislature; this is one reason why Mayor Eric Adams has recently concentrated on persuading lawmakers to be stricter on the small number of repeat criminals who commit crime. However, Hochul did not address the matter.

On crime, the best news she could offer was a tripling of aid to the state’s 62 district attorney offices to help them deal with the enormous added costs (as a result of the “discovery” changes enacted along with the no-bail law) of prosecuting every defendant, even those who were destined for a plea bargain.

Her $1 billion plan to combat the most severe forms of mental illness includes reinstating lost inpatient psychiatric beds and building 1,000 beds statewide (but only 150 for the five boroughs) as well as 3,400 units of supportive housing to promote outpatient care.

In anticipation of a recession, she promised no increase in income taxes this year. Legislators are discussing locating $40 billion in additional tax money, which will result in conflict. However, it demonstrates that she comprehends the “why” underlying the population decline she seeks to stop.

Or, does she not? Hochul then dashed hopes for an improvement in the business climate by proposing to index New York’s minimum salary of $15 to inflation. This remark prompted Democrats to get to their feet. And her anti-carbon “climate” policies will never inspire business confidence, regardless of how much she claims that they would magically reduce energy costs.

In addition, she made no assurances that the “temporary” income-tax increases imposed in 2021 (under the previous governor) will truly expire, despite the fact that temporary tax increases in this state have a history of becoming permanent.

Oh, and as the head of the Citizens’ Budget Commission, Andrew Rein, commented, “The State of the State presented an extensive menu of new spending.” Now we anticipate the Executive Budget’s presentation of the measure.” Where will she obtain the funds?

Her objective of constructing 800,000 new homes over the next ten years is commendable, but she neglected to include a crucial strategy: changing the city’s 421-a tax credit to make it affordable for builders to develop anything other than luxury complexes.

Yes, it was included in her lengthy policy handout, but it hardly means she will fight for it.

Even though her audience was ostensibly the entire state, Hochul was intent on avoiding offending the legislators who saw her speak in person. Yet she will have to if she is to obtain even what she is requesting outright.

In other words, she’ll need at least the support of moderate Democratic state senators: They outnumber the chamber’s progressives, but the extreme left has been directing the shots in the LaSalle nomination thus far, and clearly intends to continue doing so.

Democrats lost seats in the legislature last November, but the left acts as if Hochul is to blame for not doing better against Republican Lee Zeldin, despite the fact that all he did was attack Zeldin on crime and the economy. Progressives refuse to acknowledge the reforms that citizens desire.

Hochul chose to circumvent this truth once more in her conclusion: “Eleanor Roosevelt famously stated, ‘You who will construct a new world must proceed with confidence.’ We shall create a new world. And we shall demonstrate courage.”

Everyone was left wondering when the governor of New York will demonstrate such guts.

»State of the State: Kathy Hochul of New York continues to fight«