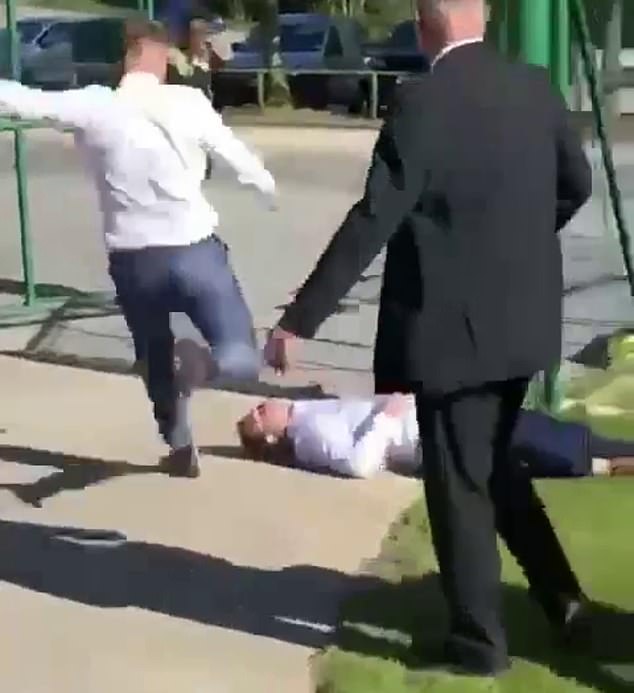 In a horrible brawl outside Melbourne’s racecourse, a cowardly gambler kicked a man in the head after knocking him to the ground.

During Saturday’s Stakes Day at Flemington Racecourse, the two guys fought in front of their pals.

A member in the crowd filmed the horrific attack, which escalated violently within seconds.

One of the men charged his opponent before falling to the ground.

His opponent stood over him and raised his leg while he lay still.

He is then kicked in the head, causing a horrible sound as the shoe strikes his head.

Witnesses yelled in surprise, and his buddies rushed to push away his attacker.

Almost immediately after kicking his opponent in the head, the man ran, pursued by others.

As the struggle continued around them, a man knelt to examine the unconscious man. As punches and kicks are thrown, more persons are seen lying still on the grass.

Victoria Police has been approached by Daily Mail Australia for comment.

On Stakes Day, the fourth and final day of the Cup Carnival, participants are urged to wear more relaxed apparel.

Two of Australia’s turf giants were defeated at Flemington on Saturday, with Cox Plate winner Anamoe suffering his first loss of the season and finishing fourth in the $3 million Group 1 Champions Stakes behind Zaaki.