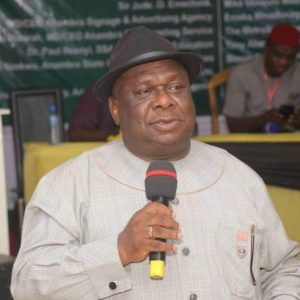 Stakeholders have expressed satisfaction with Governor Soludo’s performance as he marks one month in office.

Correspondent Valentine Mbadugha reports that Governor Chukwuma Soludo was sworn into office on April seventeen to pilot the affairs of Anambra State.

The thirty days however have gained commendations  from critical stakeholders across all sectors.

He noted that security is key to economic growth and development of any society and commended Governor Soludo for his initiatives.

On their parts, some APGA stalwarts including Mr. Felix Obunadike and Engineer Gozie Obijekwu said that the first thirty days have been very productive with the successful setting up of his cabinet.

They enjoined him to sustain the tempo and called on Ndi Anambra to give him all necessary support.

Another stakeholder, Mr. Chijioke Agbanyim, who defined Governor Soludo’s delivery within the first thirty days as impressive, noted that he is even more determined to achieve greater things for Ndi Anambra having chosen the quality individuals to work with as Commissioners.

Mr. Agbanyim was optimistic that the governor will make Anambra State more livable and prosperous as he continues to maximize productive hours.