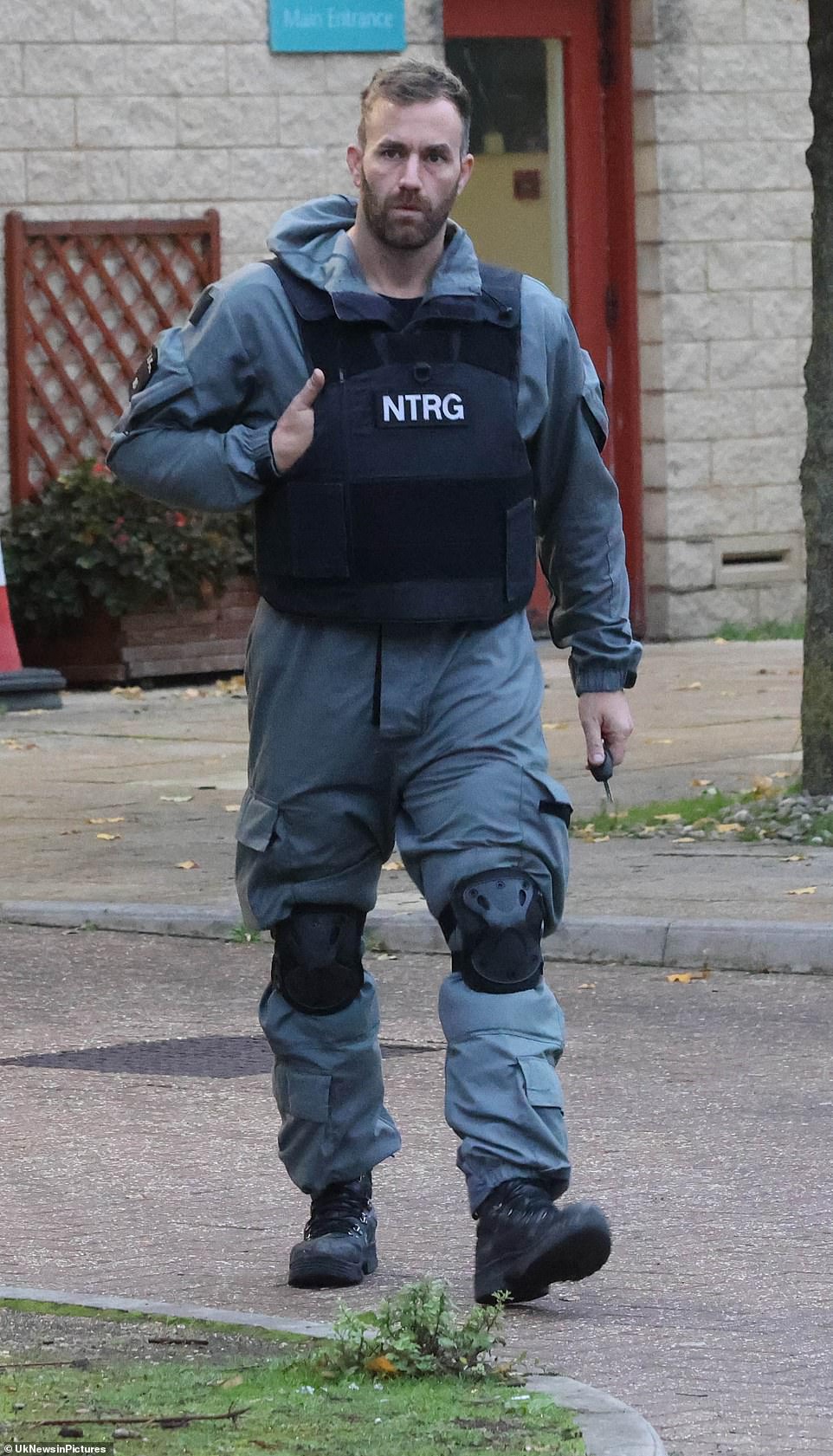 Last night, it was reported that staff at an immigration removal center near Heathrow Airport feared for their safety and locked themselves in panic rooms as more than one hundred armed detainees rioted with homemade weapons and set fire to common spaces.

Rita Biddulph, a member of the Home Office’s independent monitoring board, asserted that each of the seven units of the Harmondsworth Immigration Detention Centre in West Drayton, Middlesex, houses 28 detainees and is staffed by only two individuals.

In the early hours of Saturday, a power loss caused a blackout and automatically unlocked the migrants’ cells’ electronic locks. The climax of the violence occurred at approximately 2:00 a.m. No staff members or detainees were wounded.

As the detainees discovered improvised weapons, such as smashed tables and chairs and the metal slats from under their mattresses, the scared staff retreated into manually lockable safe rooms and called for riot police support.

Ms. Biddulph told The Sun, “Each unit is equipped with a manually lockable safe room.” Due to the fact that there were more inmates than workers, they were forced to lock themselves in panic rooms for safety.

Minister of State for Immigration Robert Jenrick has vowed to deport ‘rapidly’ any detainees who participated in the rioting. He assured that anyone responsible for this disturbance would be held accountable.

Images from the area depict many police officers and police vans outside the center.

It is the largest detention facility in Europe and can detain up to 670 prisoners. The Home Office was unable to confirm the exact number of detainees now housed at the facility or provide exact numbers for the number of individuals participating in the rioting.

The publication was told by a source in Harmondsworth that it was “chaos” when the electricity went out, cutting out lighting and heating for hours.

“The migrants were irate,” claimed the source. The decision to have them assemble there could have saved lives, and it definitely prevented injuries.

“Tensions boiled out because migrants were in the dark and did not know what was happening… The entire staff panicked. The situation did not begin to stabilize until the arrival of riot police.

Mr. Jenrick stated in a statement that a power outage caused nighttime disruptions at the Harmondsworth Immigration Removal Centre. Despite obvious evidence of intolerable levels of violence and disruption, thankfully neither the personnel nor the detainees were injured.

‘The immediate goal is to relocate people to other centers while engineers repair the power outage and any damage.

The people should be reassured that those awaiting removal from the United Kingdom are being held securely. The perpetrators of this disturbance will be brought to justice and, if necessary, banished from the country as quickly as possible.

Our diligent employees kept the Home Secretary and I informed of happenings throughout the night and today. I also visited the site today and anticipate that the center will be vacant by the end of the day.

I am grateful to Home Office employees, contractors, and HMPPS and Metropolitan police officers for their professionalism and assistance.

Friday around 7:45 p.m., the Met Police were called to the location. Firefighters and officers from the National Tactical Response Group (NTRG) and the Metropolitan Police’s Territorial Support Police were also dispatched to the scene.

A spokesperson for the Home Office stated, “The wellbeing and safety of personnel and detainees at Harmondsworth is our top priority.”

On the site are believed to be vulnerable males seeking asylum, foreign offenders awaiting deportation, and others deemed to be illegally present in the United Kingdom.

In March, HM Chief Inspector of Prisons stated that many detainees at Harmondsworth had “complex requirements” and that the “lengthy imprisonment of people with significant vulnerabilities who had, in some cases, been judged unfit for detention” was also a cause for grave concern.

Due to “systemic issues with the availability of proper release accommodation,” it was stated that detainees had been kept for exceptionally long durations.

The research indicated that eight individuals had been detained for almost a year and 26 for over six months. Despite this, the majority (58 percent) were simply released following a possibly detrimental time of incarceration.

Mitie Care and Custody, a private company, operates Harmondsworth on behalf of the Home Office.

Kent MP: Conditions at Manston are a ‘breach of humane conditions’

The facilities at a migrant facility in Kent violate humane guidelines, according to a local representative.

He stated, “Up until about five weeks ago, the system was operating as intended and extremely well.”

It is now broken and must be repaired immediately.

When asked if Suella Braverman is the right person to handle this situation, Sir Roger stated, “I’m not trying to point fingers at the moment, but I do believe whoever is responsible, whether it’s the previous home secretary or this one, must be held accountable, because a poor decision was made that led to what I would consider a violation of humane conditions.”

Sir Roger stated that he was informed that the Home Office was having great difficulty securing hotel accommodations, adding that he now understands that this was a matter of policy and that a decision was made not to reserve additional hotel rooms.

“It’s as if you were driving a car down an interstate and saw the road ahead to be clear, but then a car accident occurred, causing a five-mile backup.

“The automobile accident was the reason for not reserving more hotel rooms,” he explained.

He believes the decision was made by the Home Secretary, although he is uncertain if it was Priti Patel or Suella Braverman.

Sir Roger declared that he has posed an urgent inquiry.

Mitie stated in a statement that the Harmondsworth location of the Heathrow immigration removal center lost power due to a local outage.

We are collaborating closely with the Home Office to protect the safety of people in our care during the on-site resolution of the matter.

It follows reports that the Manston camp in Dover was so congested that people were forced to sleep on the floor, which has prompted heightened scrutiny of conditions at British immigration centres.

Suella Braverman, the Home Secretary, told the House of Commons that the UK’s asylum system is “broken.”

This year, 40,000 people have made the perilous trek to the United Kingdom aboard small boats.

This week, agency employees at Manston were also attacked, sustaining minor injuries as emotions rise over charges of overcrowding and lack of care. Three male asylum seekers were arrested in connection with the assaults, but were eventually released without being charged.

This week, a child ran to the Manston fence’s edge and delivered a photographer a message in a bottle.

The memo revealed horrible conditions, with scores of people being held at the facility for at least a month, instead of the 24 hours it was intended for.

It was reported that there were pregnant women and sick detainees inside, as well as an unattended crippled child.

The letter, written in terrible English, stated, “We are currently experiencing a horrible existence… we feel like we are in prison.”

Witnesses reported seeing security personnel at the location escort detainees back inside as members of the press passed by the perimeter gate.

The girl was part of a gang of children who evaded security guards and raced to the barrier to hurl the bottle to the photographer.

It stated, ‘Some of us are terribly sick…there are some pregnant ladies for whom they do nothing’ (sic)… We desperately need your assistance. Please assist us.

It is difficult for a parent to… There are numerous children who should not be present. They should be attending school, not jail.

The letter continued, ‘They won’t even allow us walk outside so we can’t speak with you.’

By Friday morning, more than 1,200 individuals had left the centre as Home Office workers hurried to find rooms for those detained inside the centre in an attempt to divert attention from the awful conditions.

The number of individuals at Manston in Kent has decreased to 2,600, with 1,200 people leaving the site in the last four days, according to No. 10.

It should be able to accommodate 1,600 people for around 24 hours before finding alternative lodging. However, as many as 4,000 people have been held there in recent weeks.