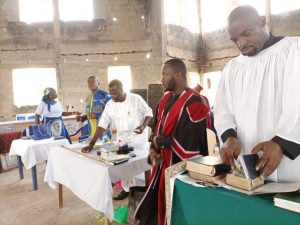 In commemoration of the one-hundred and sixty-fourth anniversary of the advent of Christianity in Igbo land, Anglican faithful at SS Peter and Paul’s Church Isiakpu Nise, joined their counterparts across Igbo land to pray for Nigeria.

The annual event  also featured visit to the orphanage homes, and other activities on Diocesan and Archdeaconry levels.

Correspondent Chibuzo Obidike reports that in Awka Diocese, special prayers for divine security, peace in the country and a free and fair November sixth governorship election in the state were the main focus for the celebration.

Anglican Faithful at SS Peter and Paul Parish, Nise also celebrated the one-hundred-and-eleventh anniversary of the coming of Christianity to the community.

In his sermon, the Parish Vicar, Reverend Canon Timothy Okwuchineke, whose message centered on “God is bigger than our problems” noted that the joy of the event is evident in the breakthrough and healings to the south east region of the country and asked the people to remain committed to things of God as a way to heal the country.

Also speaking, Igwe Romanus Iloh of Nise  assured the parishioners  that the gains in Christianity are enormous which the existence of Christianity in Igbo land has proven in eliminating the evil lifestyle of the world.

For the Coordinator of this year’s anniversary, Evangelist Emmanuel Okpagu, the three days event seeks  to build their spiritual strength with God and to highlight the importance of establishing family altar in every home for regular communication with God.

Contributing, the wife of the Parish Vicar, Mrs. Comfort Okwuchineke said that the existence of the gospel of Christ has reflected positively in the lives of women and encouraged them to strive to be role models at all times.

The parish later paid a visit to the Blessed Nise Community Children’s Home, where prayers and donations of gifts and food items formed the highpoints of the celebration.