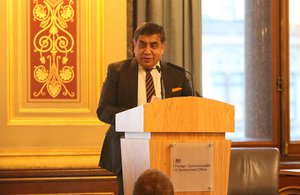 Lord Ahmad started by commenting on the topic of Human Rights Day 2022, ‘Dignity, Freedom, and Justice for All’. This subject gets to the heart of what human rights represent in people’s lives, something that Eleanor Roosevelt, who helped create the Universal Declaration, referred to when she stated universal values begin:

“in small places…the neighbourhood…the school…the factory, farm, or office…Unless these rights have meaning there, they have little meaning anywhere.”

Lord Ahmad emphasised that this year’s atrocities had only increased the UK’s determination to promote and preserve human rights. He provided an outline of the United Kingdom’s efforts to promote human rights on all continents. Ethiopia to Pakistan, Iran to Ukraine. From the right to life to the freedom of the press to education.

From the UK’s role in evacuating Afghans at risk following the Taliban takeover in August 2021, to the UK’s global leadership in promoting Freedom of Religion or Belief and Preventing Sexual Violence in Conflict, to UK-targeted programming to end modern slavery, the UK has stood up for the human rights of everyone, everywhere, and will continue to do so.

Lord Ahmad said that he has met with several human rights sufferers from throughout the globe. He shared personal insights on the significance of ensuring survivors’ voices are heard, emphasising that we all have a responsibility in establishing the environment for everyone to exercise their human rights.

Lord Ahmad concluded by paying tribute to human rights defenders, the ultimate protectors of equality and freedom, and thanking everyone who works with the Foreign, Commonwealth, and Development Office to advocate human rights – for their ingenuity, persistence, and unflinching perseverance.  He highlighted that united we can transform the world for the better, and achieve “dignity, freedom, and justice for all”.