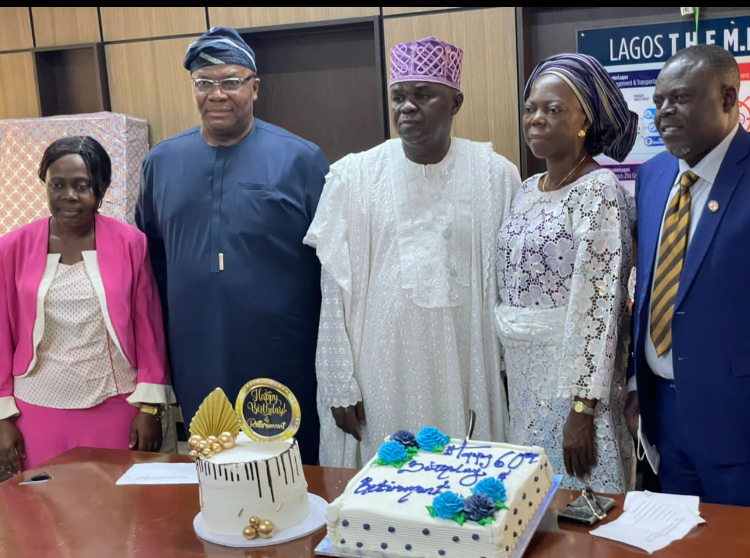 The Ministry of Special Duties and Intergovernmental Relations has commended its Director of Intergovernmental Relations, Mr. Adetola Oduntan Bankole, who retired from the service of the Lagos State Government after attaining the statutory age of 60 years and 33 years of meritorious service. Speaking during the last day in office ceremony organised by the Ministry, the Commissioner for Special Duties and Intergovernmental Relations, Engr. Tayo Bamgbose-Martins, showered praises on the retiree for his dedication, commitment, and excellent service to the State Government. In his words: “The retiree is respectful, dutiful and very experienced on the job. He is cooperative and loyal to the government.

You should not fear retirement but rather be grateful and happy that you are retiring successfully and that God brought you this far”. In his contribution, the Permanent Secretary, Mr. Sesan Ogundeko, described the former director as a valuable team player, adding that Mr. Bankole played a prominent role in transforming the intergovernmental relations department within a short period of his assumption of duty.  Ogundeko thanked the retiree for his excellent service to the Lagos State Government and his family for giving him support throughout his years in service.

On his part, the Permanent Secretary, Ministry of the Environment and Water Resources, Mr. Omobolaji Gaji said: “I have known him for a very long time right from the Governor’s office, he is a good man and he always sets his mind to achieve his goals. Thank you for the work you have done so far for Lagos State Government. We are going to miss you so much”.

Gaji also urged the staff of the Ministry to emulate and learn from the exemplary behaviour and dedication of Mr. Bankole. In the same vein, Dr. Yusuph Jimoh, the Permanent Secretary – Audit Service Commission – said that the retiree is an innovator because he creates something remarkable out of every situation.

“He revived his department and made it relevant within, locally, and internationally. He is a rugged man who can weather any condition. Anybody who has his kind of intelligence can revive any organisation”, he added. In his response, Mr. Adetola Bankole thanked the Lagos State Government for the opportunity to serve, adding that his service years were glorious experiences.  “I want to thank the State for the opportunity to serve.

Wherever you find yourself be grateful, take things easy, and don’t let things overwhelm you. There are many ways to get out of service the best one is what we are doing today, I pray you all get to celebrate this way”, he said. The event was also attended by family members, friends, colleagues and well-wishers in the public and private sectors.