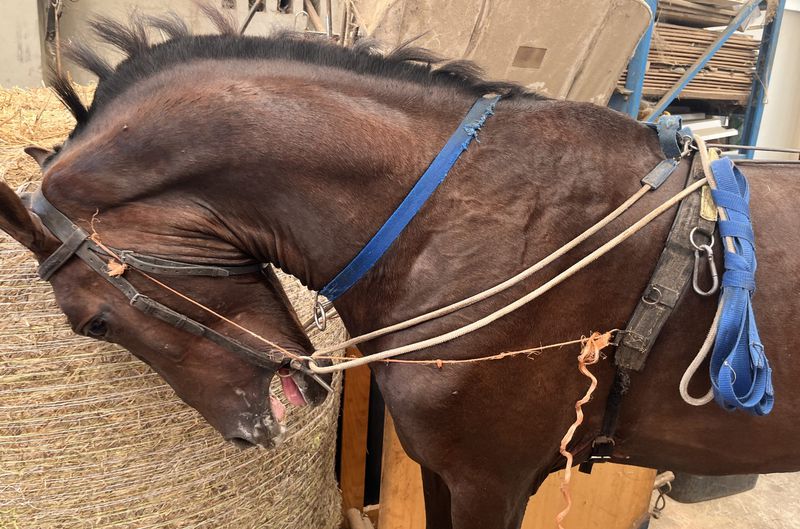 Cap de Bon Homme SPCA inspectors had to acquire a court order to gain access to a property in Grassy Park, Cape Town, after the owner denied them access to conduct an examination, culminating in the confiscation of four Saddle horses maintained in deplorable conditions and trained using brutal methods.

The Cape of Good Hope SPCA received a complaint regarding horses maintained in substandard circumstances on a Grassy Park farm.

As a result of the filthy living circumstances, the complaint additionally mentioned a strong ammonia odor in the air and flies everywhere.

Inspectors from the Cape of Good Hope SPCA launched an investigation as a result.

The inspectors were denied entrance to the Grassy Park property by the owner, who demanded that they return with a court order.

Inspectors had no choice but to petition the Wynberg Magistrates Court for an order under the Animals Protection Act 71 of 1962 and Regulation 468 in order to get entry to the property and investigate.

The inspectors returned to the Grassy Park property with representatives of the Grassy Park South African Police Service (SAPS) and the Law Enforcement: Animal Control Unit of the City of Cape Town.

The team had no idea what they would discover on the site.

When the inspectors arrived at the property, the initial impression was quite suspicious.

A woman in the front yard demanded that the crew wait outside while she called the property owner.

Chief Inspector Jaco Pieterse and Inspector Jeffrey Mfini felt uneasy about the arrangement and followed the woman into the residence.

As the woman entered the backyard property with the inspectors on her heels, she told the owner immediately that the SPCA was present.

The owner was not pleased with the SPCA’s presence on his farm, especially as they were cruelly and antiquatedly training one of their horses.

Inspectors were horrified by what they discovered. A male Saddle horse was discovered restrained. His head was pulled onto his chest, and his neck was forced into a hyper-flexed, arched bow before being tied in this unnatural posture.

The poor animal was unable to raise or lower his head or move it to the left or right to alleviate the muscle torment or mouth discomfort because of the tight sections of rope linked to his bridle, through his bit, and onto a roller.

This agony had been inflicted on the horse for a lengthy period of time.

“He was saturated in sweat, with enlarged veins and blood vessels from exertion. The thick white foam that covered his mouth and nostrils, along with her large eyes and rigid facial muscles, told volumes about his extreme state of discomfort. SPCA Chief Inspector Jaco Pieterse remarked

One of the trainers hurriedly attempted to loosen the rope to prevent the inspectors from photographing and filming the brutal training technique. Inspectors were able to promptly intercept and collect evidence for criminal prosecution.

Upon further examination, the inspectors discovered three additional Saddle horses housed in unsuitable stables at the rear of the residential property.

There was a distinct odor of ammonia in the air. Within the so-called stables, there was little to no ventilation. The horses had no access to clean water, and their living conditions were filthy and unsanitary.

“This torture technique, which is almost identical to the Rollkur technique, involves the forced, aggressive, over-flexion of the horse’s neck, with the effect of forcing the horse into an artificial outline requirement for competing Saddle horses and holding it in that position for extended periods of time. This is inhumane, according to SPCA Chief Inspector Jaco Pieterse.

This training method is exceedingly brutal and produces great emotional and physical distress in any animal subjected to it. It has no advantage for the animal and is a cruel and self-serving behavior by the owner to increase the performance of the animal in competition.

Hyperflexion inhibits the animal’s ability to breathe by generating a dynamic blockage of the upper respiratory tract due to the extreme bend crushing the vocal folds as the enormous lungs try to suction air into the body — image choking as you struggle for each breath. Extreme pressure on the parotid gland is manifested by an abundance of salivation.

This torture technique has been known to produce muscle rips, bone spurs, and degeneration of the spine due to the incorrect positioning of the vertebrae if done repeatedly.

The proprietor was quite aggressive and often yelled at the inspectors.

Constantly, members of the SAPS were required to interfere in an effort to restore order.

When the inspectors notified the owner that his horses would be confiscated, the owner became aggressive and struck Chief Inspector Jaco Pieterse, stopping him and the team from executing their responsibilities.

The men of the SAPS intervened promptly.

Members of the SAPS apprehended the owner, and inspectors filed official criminal charges in accordance with section 71 of the Animals Protection Act of 1962 for animal cruelty, obstruction, and assault.

The owner is scheduled to appear before the Wynberg Magistrates Court for the first time on Thursday, January 19, 2023.

The team confiscated the horses and transported them safely into the SPCA horsebox.

The horses were transported to the SPCA Horse Care Unit for further veterinary care and examination.