Makhosini Ndlovu, 26, and Thobelani Sodinga, 25, from Pimville Zone 9 in Soweto, Johannesburg have transformed an illegal dump site into a thriving food garden for their community.

The pair, through an initiative called the Perseverance Development Programme, cleared the space next to the Kliptown train station that had become infested with rodents and was an eyesore for the community. They grow spinach, carrots, beetroot, chomolia (African kale), cabbage and baby marrow. They sell their produce locally. They also donate parcels to elderly residents in Pimville and neighbouring Kliptown.

Their garden is a stone’s throw away from Walter Sisulu Square in Kliptown, where the Freedom Charter was adopted in 1955.

Ndlovu said they started the garden in September after deciding to clean the space that had been used as a rubbish dump. Volunteers from Step Up SA, Leroy Merlin South Africa and Roots and Shoots South Africa helped with the cleanup and donated some tools and seedlings to get them started, said Ndlovu.

He said the space deteriorated over time because it was not being maintained by the City. This poor service delivery has become a norm in many parts of Kliptown and Pimville Zone 9, he said.

“When we were kids, this was a playground. But as time went on it became a dumping site because the infrastructure fell apart. People used to start fires here, others got mugged and there was no safe play area for children in this community,” Ndlovu said.

Ndlovu was unemployed for four years. He said starting the garden changed his life for the better.

Sodinga said the space has become a hub for the community. “There are no community halls in zone 9, so residents have started holding their meetings here,” he said.

Sodinga also said they are trying to encourage other young people in the area to get involved in the garden. They give them some produce to take home in exchange for their help.

The pair want to expand the food garden and create jobs for people in Pimville Zone 9 and Kliptown. Ndlovu said they also want to start mobile food gardens in other parts of Soweto.

“At the moment, we are using our own funds and resources to run the project but we don’t have enough,” said Sodinga.

Kliptown resident and community activist, Chriszelda Jooste-Swartz said it was encouraging to see people reclaiming the space and using it to uplift the community. 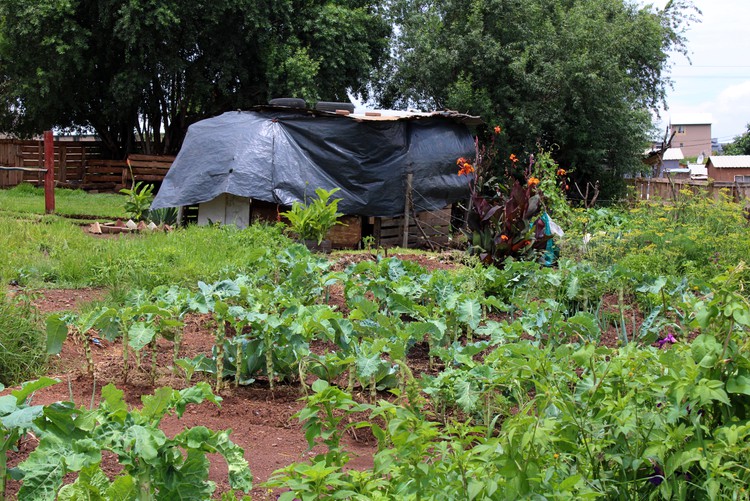 The pair say they grow spinach, carrots, beetroot, chomolia, cabbage and baby marrow. They sell their produce locally and donate parcels to some elderly residents in Pimville and neighbouring Kliptown.