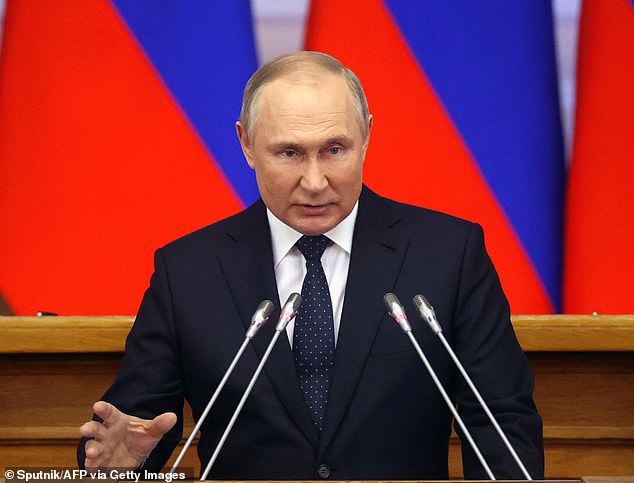 Russian forces are advancing at a snail’s pace in Ukraine as commanders’ maps are half a century old and their weapons are misfiring, Western officials said yesterday.

Clutching charts printed in the 1970s, frustrated Russian top brass are taking territory at a rate of just half a mile a day.

Their intended targets do not appear on these maps as many structures were erected more recently.

Moscow’s soldiers are reduced to guessing where to fire rockets, so missiles are missing their targets and endangering more civilians.

The team will support the government in Kyiv in gathering evidence and prosecuting war crimes and will include experts in conflict-related sexual violence.

They will arrive in neighbouring Poland early next month to examine how they can assist. Last night a Western official said of Moscow’s ground offensive: ‘Russian forces are using antiquated mapping, some of it from the 1970s.

‘So the maps do not represent the target sets they are attempting to strike.

‘Yet Russian losses remain greater than Ukrainian losses and these losses are affecting the will of Russian soldiers to fight.

‘The nature of Russia’s tactics have been crass, compounding problems caused by political inference.

‘So there are some introspective moments when they wonder how and why everything has gone wrong.’

Russian troops outnumber Ukrainians roughly three to one in eastern Ukraine, where decisive battles are expected to be fought in the coming weeks.

But Russia has made slow progress in its bid to capture the Luhansk and Donetsk regions, with a major breakthrough proving elusive, according to intelligence reports.

Logistical issues are continuing to plague Moscow’s troops despite their operations now being confined to Ukraine’s east.