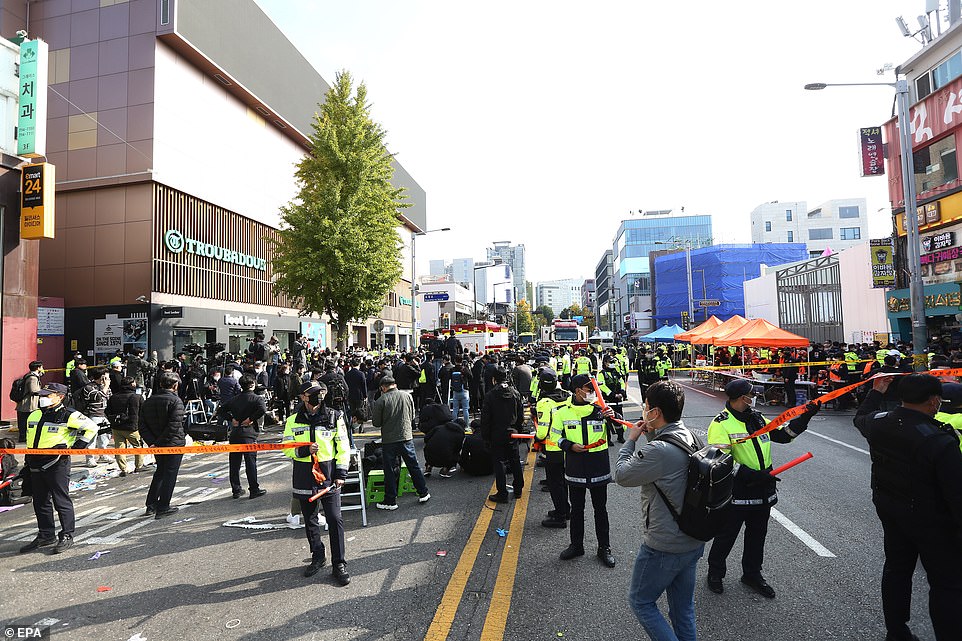 Over 150 people lost their lives in one of the country’s worst peacetime catastrophes yesterday night during Halloween celebrations in Seoul, prompting South Korea to announce a week of national mourning.

Around 10:30 pm, amid a tragic crush at the Halloween event in Itaewon, where 100,000 people had gathered in congested streets, people started to “fall like dominoes.”

According to reports, dozens of people had cardiac arrests, and as of right now, 153 people have died, including at least 19 foreigners. Many of the deceased were women in their 20s.

After visiting the scene earlier today, South Korea’s President Yoon Suk-yeol ordered a week of national mourning and stressed that the fatal stampede “should not have occurred.”

Yoon said in a national speech that “a catastrophe and calamity occurred in the center of Seoul that should not have happened” and vowed to “thoroughly examine” the situation to make sure it wouldn’t happen again.

According to reports from yesterday night, some partygoers persisted in partying in the neighborhood even after the crush, defying the police’s pleadings for them to go home.

Nearly an hour after the first report of the crowd crush, at 11:19 p.m., the fire department asked that the Halloween event be called off.

The Hankyoreh said that most bars were packed and that revelers carried on drinking and enjoying the Halloween event well into the night. Crowds dressed in costumes were busy snapping photographs in the alleyways close to the accident scene.

Them allegedly obstructed an ambulance from getting to the accident scene as the police could be heard ordering people to leave via a megaphone. This is what benefits us. Please break up.

The streets were so crowded that paramedics had to ask bystanders to do CPR since they were unable to rapidly reach or treat the large number of patients.

The majority of the victims died of heart arrest owing to asphyxiation from pressure from being trapped beneath other bodies, according to emergency personnel and medical professionals who eventually treated them in hospitals.

The streets were a picture of “complete mayhem,” a witness told the Hankook Ilbo, adding that “after some individuals slid and fell, others fell like dominoes and no one appeared to be able to crawl out of it.”

President Yoon sent his sympathies to the victims, who were mostly young adults and teens, and wished the many wounded in one of the biggest stampedes to hit the globe in decades a swift recovery.

He issued a statement that said, “This is extremely unfortunate. Last night, a catastrophe and calamity that shouldn’t have happened occurred in the center of Seoul. According to Prime Minister Han Duck-soo, the government has chosen to observe a period of national mourning from now until midnight on November 5 in remembrance of the deceased.

He stated that a yet-to-be-determined venue in Seoul would host a communal altar for the victims.

All federal buildings and foreign embassies will fly their flags at half-staff at this time, and any unimportant public activities will be canceled or postponed.

According to authorities, workers of public institutions and civil servants will wear ribbons as a sign of sympathy.

Many of the victims, many of whom were women in their 20s, were adolescents or in their early 20s, according to local emergency services. Due to the overwhelming number of deaths, a temporary morgue was put up in a nearby building.

According to the authorities, a big throng started pressing forward in a small alleyway outside the Hamilton Hotel, a popular gathering place for revelers in Seoul, when they heard rumors that a celebrity was there.

On the streets of Itaewon, dozens of victims received CPR while several more were transported to local hospitals.

As one witness put it, “People were heaped on top of one other like a mausoleum.” Some seemed to be dead at that moment, while others were rapidly losing consciousness.

Images and videos posted on social media depict the horrifying fear that followed the crush and people’s frantic attempts to flee the tragic building.

A particularly upsetting video showed hundreds of individuals in the crowd straining to breathe and maintain their balance as rescue officials tried to remove those who needed medical attention from the mob.

In South Korea, more than 1,700 emergency personnel were sent to one of the bloodiest crowd crushes in recent memory. More video taken from above the street saw hundreds of first responders frantically doing CPR on victims laying on the pavement.

One guy was seen scaling a nearly flat wall far above the throng to get away from the chaos below him.

In the aftermath of the tragedy, while scores of more emergency personnel and members of the public worked feverishly all around them, video posted on social media showed dozens of unmoving individuals laying on the ground.

The majority of the figures were receiving CPR and were likely experiencing cardiac arrests.

The fatal tragedy happened as the crowded mob rushed into a small lane.

Hundreds of people were jammed into the sloping lane, crushed and immovable, while rescue personnel and police attempted to pull them free, as shown in social media video.

According to a witness who spoke to Reuters, a temporary morgue had been put up in a building close by. According to the witness, some four dozen remains were subsequently transported on wheeled stretchers to a government building so that the dead could be identified.

Following the stampede in the Itaewon entertainment area on Saturday night, Choi Seong-beom, head of Seoul’s Yongsan fire station, warned that the death toll would increase as emergency personnel continued to carry the wounded to hospitals all across Seoul.

In addition to the 1,700 emergency workers that responded, 15 “disaster” medical teams from all around South Korea were also sent to assist in the aftermath of the crush.

But since rescue personnel were first severely overburdened, several bystanders and witnesses attempted to help the hurt and dying.

According to reports in the local media, Seoul has put up a list where those who are concerned about loved ones may get information.