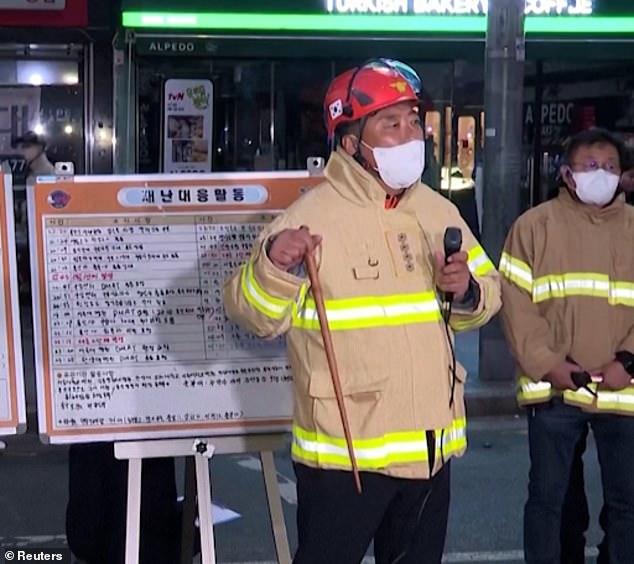 A video depicts a South Korean firefighter trembling as he briefs the press on the Halloween stampede that killed over 150 people.

Last night, 153 people died in a crush in Seoul, and another 82 were injured, as massive crowds gathered for a Halloween event in the famed nightlife district Itaewon.

The video of Yongsan Fire Department Chief Choi Seong-beom calmly notifying the media that the dead toll from the mob crush has increased has been widely distributed online.

The ‘heartbreaking’ footage, captured many hours after the fatal tragedy, shows the weary emergency worker holding the microphone while slightly trembling.

Online users replied to the video by expressing their condolences to Choi Seong-beom and the other emergency personnel who responded to the tragic tragedy.

To response to one of the deadliest crowd crushes in recent memory, South Korea mobilized more than 1,700 emergency personnel, including 520 firefighters, 1,100 police officers, and 70 government employees.

Additional footage overlooking the street showed hundreds of rescue personnel doing CPR to victims who were sprawled on the roadway.

The person that published the footage online stated, “I am concerned for the mental health of everyone at the scene.” I hope that the nation would take responsibility and support the trauma management of the personnel who were deployed today after the accident.’

When the chief of the fire department has shaky hands, you know a situation is tense, as stated by Racheal.

Being a first responder to a terrible catastrophe during a celebration would affect even those accustomed to sorrow, according to a tweet from a different user.

Reid stated, “I have compassion for him; can you image being him? I surely pray for the police, emergency personnel, and those who responded to the tragedy.

One Twitter user speculated that his shaky hands were a result of CPR, while another commented, “This is heartbreaking.” I hope that they all receive free therapy.”

People reportedly ‘dropped like dominoes’ at 10:30 p.m. amid the fatal crush at the Halloween festival, when 100,000 people had gathered in tiny streets. South Korea has officially announced a week of mourning.

Several more reportedly experienced heart arrests, and the current death toll stands at 153, including at least 19 foreign nationals, with the majority of deaths being women in their 20s.

President Yoon Suk-yeol of South Korea declared a week of national mourning and stated that the fatal stampede’should not have occurred’ after visiting the site earlier today.

“In the heart of Seoul, a tragedy and disaster that should not have occurred occurred,” Yoon said in a national speech, pledging to “thoroughly investigate” the situation and guarantee it never occurs again.

According to reports from last night, several revelers continued to party in the neighborhood after the crush, despite the police’s desperate requests for them to leave.