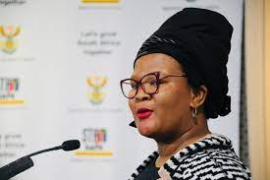 Makhasi chastised public employees who saw no problem with asking for the assistance while they have a steady source of income.

“The SRD is intended to provide relief to the poor and financially distressed citizens in the country. The Social Development Minister reported that approximately 40 000 public servants applied for the R350 relief grant in May last year, and 241 of the public servants received the grant.

“This amounts to fraud and the DPSA is ready and available to support the Department of Social Development and the South African Social Security Agency (SASSA) in strengthening controls to prevent public servants from accessing the SRD grant,” Makhasi said.

The Director-General said the DPSA will support steps to recover monies from public servants who wrongfully benefited, and will ensure that their cases are referred to law enforcement agencies to take action.

“I want to reiterate that any official who receives any form of income from the public service does not qualify for this grant and may not apply for it, as it is tantamount to stealing from the poor,” she said.

People who do not qualify to receive the grant include public servants on the Persal system, those on internships, Expanded Public Works Programme (EPWP), learnerships or any developmental programme where they receive a form of stipend from government.