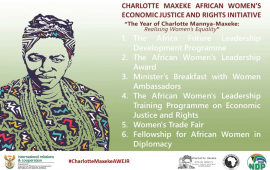 Government has officially launched the Charlotte Maxeke African Women’s Economic Justice and Rights (AWERJ) initiative, which aims to give practical effect to the country’s commitment to the economic and financial inclusion of women.

In paying tribute to the work of Charlotte Maxeke, the Department of International Relations and Cooperation (DIRCO) said the “organic” legacy initiative would be an embodiment of her values and leadership qualities.

The project will also be anchored on South Africa’s foreign policy, which is primarily Pan Africanist.

“The Charlotte Maxeke African Women’s Economic Justice and Rights initiative is our contribution to the Global Acceleration Agenda for the empowerment of women and girls. It is the missing piece to our women, peace and security agenda. Through this initiative, we have come full circle in our efforts on the full emancipation of women and girls,” DIRCO Minister Naledi Pandor said on Monday.

She said the move is a practical expression of diplomacy of Ubuntu and aims to strengthen South Africa’s international solidarity work.

“It is an affirmation and a validation of women’s economic justice rights as fundamental human rights.”

According to the Minister, while more efforts have gone into civil and political rights of women, the economic rights of women and girls have been largely neglected.

“It is for this reason that South Africa chose to focus its efforts under the Generation Equality Forum on Economic Justice and Rights.”

Last month, President Cyril Ramaphosa joined other Heads of States and organisations at the Paris Forum to endorse the outcome of the multi-stakeholder process, the Global Acceleration Plan for the empowerment of women and girls across the globe.

“Furthermore, he outlined South Africa’s commitments for the next five years, including the Charlotte Maxeke AWEJR initiative as one of the programmatic commitments.”

Pandor said this year’s Women’s Month is taking place against the backdrop of the celebrations of 150 years since the birth of Maxeke, whom she described as an internationalist, intellectual, teacher, visionary, social worker, visionary, advocate for women’s rights and human rights activist.

Government has declared 2021 as the Year of Charlotte Maxeke.

Through the implementation of this initiative, Pandor said South Africa seeks to mobilise the global community to support women’s leadership across all the action coalitions, particularly economic justice and rights, education, training and mentorship as well as creating opportunities in economic participation, networking, diplomacy, and trade.

“This gathering is an invitation to all our friends and partners to join hands and walk with us as we roll out this project.”


According to Pandor, the Charlotte Maxeke AWEJR programme has six concrete flagship programmes implemented gradually in the coming three to five years.

The department has also opened an invitation to those who would like to see an opportunity to contribute to the economic justice and rights of women and girls in Africa.

“As I conclude, let be guided by the words of the patron of this initiative and I quote, ‘this work is not for yourselves, kill that spirit of self, and do not live above your people but live with them if you can rise, bring someone with you,” said Pandor. – SAnews