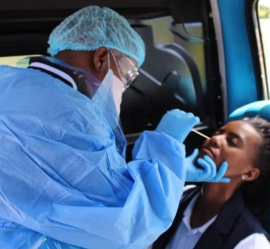 The number of laboratory-confirmed COVID-19 cases in South Africa has increased by 443, bringing the total to 3 993 444.

This rise reflects a positive rate of 3.9 percent.

“Of the 19 recorded deaths, two took place in the previous 24 to 48 hours, according to the Department of Health. As of now, there have been 101,764 fatalities, according to information released on Wednesday by the National Institute for Communicable Diseases (NICD).

Up to this point, South Africa has tested 25 720 034 people in both the public and commercial sectors.

Today’s new cases are primarily from Gauteng (37 percent), then the Western Cape (19 percent ).

“Today’s percentage of positive new cases to all new tests is (3.9%), which is higher than yesterday (3.3 percent ).

In the previous day, there were 18 more hospital admissions.