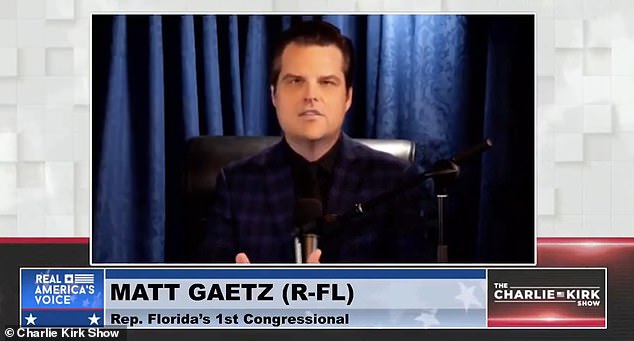 Rep. Matt Gaetz stated that a number of GOP lawmakers would ‘rather be waterboarded’ by Rep. Liz Cheney than vote for Leader Kevin McCarthy as speaker of the House, as the future of the GOP leader hangs in the balance due to a multitude of Republican objections.

Monday afternoon on Real America’s Voice, the Florida Republican said, “There are clearly at least five people, and actually a lot more than that, who would rather be waterboarded by Liz Cheney than vote for Kevin McCarthy for Speaker of the House.”

The Republican caucus will hold its leadership elections behind closed doors on Tuesday, with or without a formal majority in the House, as they need one more victory to gain control of the lower chamber.

As a result of her rising popularity among Democrats as a member of the January 6th committee, a number of analysts recommended on Twitter that Cheney be elected speaker.

McCarthy is expected to garner a simple majority among his Republican peers, but members of the House Freedom Caucus plan to put up a symbolic challenger to demonstrate to the California Republican that he will not be able to garner the 218 votes he needs to become speaker in a formal floor vote on Jan. 3.

The Florida Republican stated, “There are unquestionably at least five people, and likely many more, who would rather be waterboarded by Liz Cheney than vote for Kevin McCarthy for Speaker of the House.”

Andy Biggs, R-Arizona, a member of the Freedom Caucus, said Tuesday morning that he will challenge McCarthy for the GOP leadership.

Biggs told Newsmax, “We now have a new paradigm.” And I believe the nation desires a different direction from the House of Representatives, and it is a new world. And certainly, I will be nominated for the role of House speaker tomorrow. We’ll see if we can complete the task.’

He conceded that it will be difficult to defeat the Republican from California.

“It will be difficult,” he remarked. “Kevin has raised a great deal of money and accomplished a great deal, but this is not just about Kevin.” I believe it’s a matter of institutional direction and trajectory, and that’s where we’ll determine if enough people agree that we need to shift this institution’s orientation and open it up.

Along with Gaetz and Biggs, Representatives Bob Good of Virginia and Chip Roy of Texas have spoken out against McCarthy’s speakership ambition.

Gaetz, who is not a Freedom Caucus member, has championed Rep. Jim Jordan as an option to McCarthy, despite the fact that the Ohioan has stated he will support McCarthy’s quest.

The Freedom Caucus is attempting to use its votes to demand rule changes that would give rank-and-file members greater authority than the speaker. They desire to reinstate the right of any member to propose the removal of a speaker. In addition, they want the House to only examine legislation backed by a majority of Republicans and for committee chairs to be chosen by committee members, not by the leadership.

Freedom Caucus Chairman Scott Perry, R-Pennsylvania, who has been conducting negotiations with McCarthy, stated on Monday that his conversation with the Republican leader ‘went well.’

In addition, Republican members of Congress will vote for their majority leader, while Whip Steve Scalise has no opposition. Reps. Tom Emmer, R-Minnesota, Jim Banks, R-Indiana, and Drew Ferguson, R-Georgia, are vying to succeed him as whip ahead of Tuesday’s elections.

Emmer, who presently serves as chairman of the National Republican Congressional Committee (NRCC), will have to address the party’s underwhelming result despite hopes of a red wave. Ferguson presently works as chief deputy whip and contends he has the necessary expertise. As chairman of the Republican Study Committee, Banks positions himself as the most conservative contender.

House GOP Conference Chair Rep. Elise Stefanik is defending her chairmanship against a challenge from fellow GOP Rep. Byron Donalds in the contest for the fourth seat.

Trump supports both McCarthy and Stefanik, who were appointed to their positions after Republicans deposed Cheney.

In two recent interviews with Fox News, Freedom Caucus member Donalds refused to declare if he supports McCarthy for speaker. Stefanik has continued to back McCarthy’s campaign.

We do not have favorable outcomes. Consequently, members have many legitimate queries,’ Donalds added