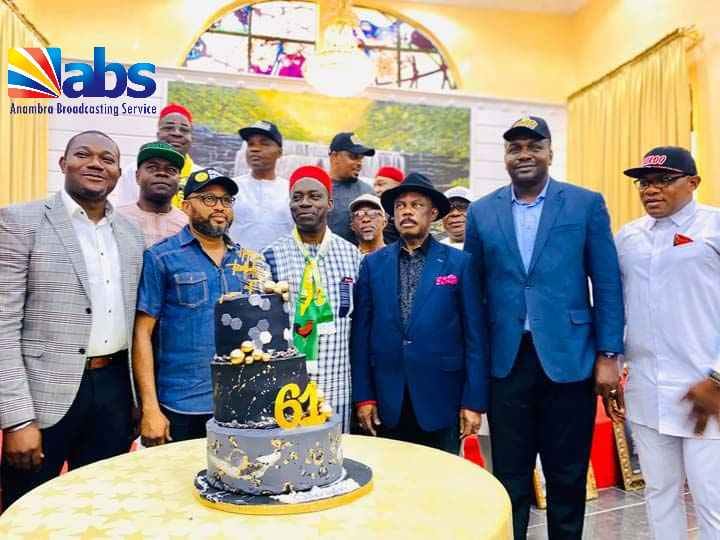 Governor Willie Obiano says the former Central Bank Governor, Professor Chukwuma  Soludo, represents the Igbo Spirit because of his determination to succeed, despite all odds.

In a message to mark Prof Soludo’s sixty-first birthday, Governor Willie Obiano said that Soludo has achieved so much despite all odds.

A release signed by the Commissioner for Information and Public Enlightenment, C. Don Adinuba stated that governor Obiano noted  that on account of sheer brilliance, hard work and God’s grace, Professor Soludo became Nigeria’s most successful and revolutionary CBN governor, a full Economics Professor at thirty-eight and author of several books, articles and conference papers across the globe.

According to the release, Chief Obiano was speaking at a key but impressive birthday ceremony for the former CBN governor at his Aguleri residence which had in attendance the Speaker of the Anambra State House of Assembly, Honorable Uche Okafor; Professor Soludo’s running mate on the APGA platform in the November 6 gubernatorial election in the state, Dr. Onyeka Ibezim; the chairman of the House of Assembly Committee on Budget, Honorable Obinna Emenaka, among others.

Governor Obiano said that it is an achievement of great proportions that Professor Soludo became the only African thinker and scholar chosen as a member of the United Nations Panel of Experts to Review the Global Financial System in the wake of the 2008 global recession.

Chief Obiano remarked that Professor Sokudo remains very humble in spite of his international achievements, recalling how he served as the Returning Officer at his village development union election after being the CBN governor.

He praised Professor Soludo for  being home conscious and brought a CBN branch to Awka, and as a result not only helped to develop the state capital but also saved people the time resources and risks of going to places like Benin and Enugu to bring cash to banks in the state.

Responding, Prof Soludo thanked Chief Obiano for making Anambra the best state in the country, considering the figures published by the National Bureau of Statistics, noting that Anambra has the lowest poverty index and the lowest unemployment rate in the country.

He said that Anambra state has no serious rival in education, rate of rice development, immunization, security, the fight against COVID-19 and other areas.

Professor Soludo, who is the chairman of the Anambra State 2070 Committee developing a strategic plan to make the state a fully developed economy by 2070, pledged to consolidate on the achievements of Governor Obiano.