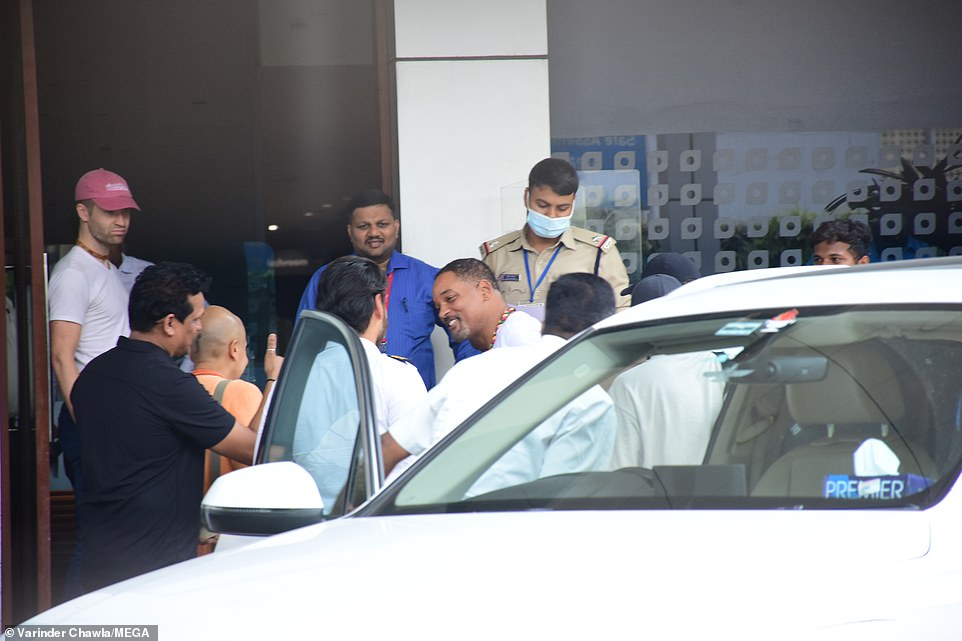 Will Smith was all smiles as he landed in India where he was seen for the first time since the infamous Oscar’s slap.

Smith was pictured touching down in a private airport in Mumbai on Saturday where he was greeted by adoring fans who he took snaps with.

Smith is reportedly in India to meet spiritual leader Sadhguru, who Smith and his family met with back in 2020 in Los Angeles.

Dressed casually in a white t-shirt, dark grey shorts over white compression tights and a pair of Nike sneakers, Smith looked relaxed and happy after landing in the South Asian country.

As staff helped him unload his things from his vehicle nearby fans excitedly scream ‘Will, Will Smith!’

Smith then takes a couple of selfies with security and turned to the fans yelling his name, giving them a wave while flashing a smile before continuing to take a few more selfies and entering a building where he gives someone a hug.

This is the first time Smith has been spotted in public nearly a month after slapping master of ceremony and comedian Chris Rock on live TV and in front of his co-stars after he n made a joke about his wife Jada Pinkett Smith’s buzzcut.

‘We want to express our deep gratitude to Mr. Rock for maintaining his composure under extraordinary circumstances. We also want to thank our hosts, nominees, presenters and winners for their poise and grace during our telecast.’

After the decision was reached Smith released a statement saying: ‘I accept and respect the Academy’s decision.’

The actor had already resigned from the Academy when the ban was issued.

Smith’s  documented one of his meetings with Sadhguru at his LA home in 2020.

The yogi, 65, whose real name is Jaggi Vasudev and who owns an Ashram in India, started his own non-profit spiritual foundation and has more than three million followers on Twitter.

Smith said he was a huge fan of Sadhguru and had followed him since reading his book ‘Inner Engineering’ and wanted to introduce the guru to his family.

‘I wanted my family to meet spiritual people, to start interacting with people who are not hooked on the material world,’ he said.

In a clip shared to Smith’s social media, Sadhguru is seen pulling up to the actor’s home on a motorcycle and chatting with him and his daughter Willow.

‘What happened yesterday they’re suffering today. Are you suffering life or your memory? You’re just suffering your memory,’ he tells an attentive Smith.

‘What may happen tomorrow you already suffer. You’re suffering your imagination!’

Following their meeting Willow Smith revealed that Sadghuru helped her through an ‘existential crisis,’ saying she was filled with ‘gratitude’ for this moment.

Last month the guru sparked controversy when he appeared on British morning show This Morning and claimed that a major event such as the Covid-19 pandemic doesn’t make people unhappy.

He claimed that ‘human suffering’ occurs because people ‘don’t know how to handle themselves’ spiritually and physically.

However, his teachings fells on deaf ears on Twitter, where This Morning viewers questioned his motives, calling him a charlatan and complaining he was on the show for too long.

Meanwhile his Smith’s wife Jada has continued with her Red Table Talk where she referenced the now infamous slap incident, but did not elaborate much further she did promise that it will be addressed some time on the chat show in the future.

The 50-year-old actress released a written statement at the beginning of the first episode of season five her Facebook Watch series which released on Wednesday.

It read: ‘Considering all that has happened in the last few weeks, the Smith family has been focusing on deep healing.

‘Some of the discoveries around our healing will be shared at the table when the time calls. Until then…the table will continue offering itself to powerful, inspiring and healing testimonies like that of our incredibly impressive first guest.’

‘This is a season for healing. And I’m here for it,’ she wrote.