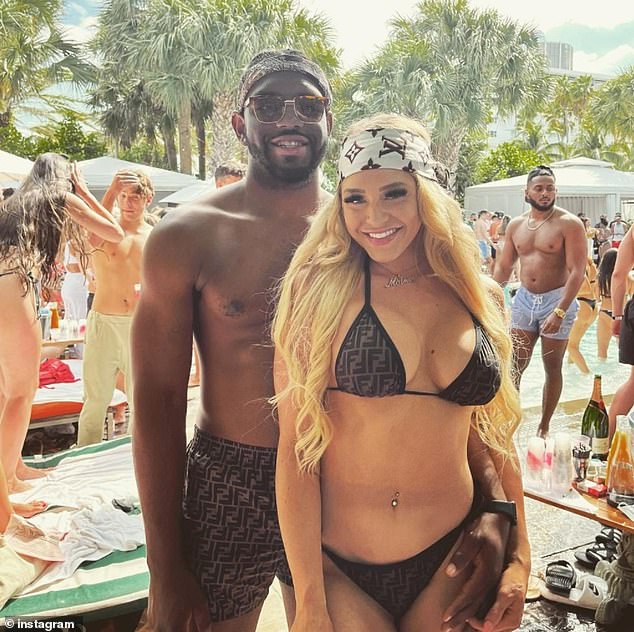 Newly disclosed text conversations suggest that a man stabbed to death by his OnlyFans model girlfriend earlier this year was attacked and stabbed in two domestic conflicts immediately before the murder.

The communications, discovered by Miami police as part of their investigation into the murder, give new light on the toxic connection between Christian Obumseli, 27, and Courtney Clenney, 26, before he was murdered on April 3 following an apparent altercation in their luxurious condo.

Currently presented as evidence in a growing murder case against Clenney, the communications show a relationship riddled with verbal and physical abuse perpetrated by the influencer in the months preceding the murder.

Less than a month prior to the incident, the abuse became so severe that Obumseli, a large, muscular guy who towered above his alleged terrorizer, texted Clenney: “Is love going to kill me?”

The suspected femme fatale is currently being charged with second-degree murder.

She was detained in Hawaii in August while undergoing treatment for substance misuse and post-traumatic stress disorder, ostensibly following a mental breakdown.

Messages from Obumseli’s iCloud account obtained by the Miami Herald on Thursday describe two incidences that would have triggered red flags if viewed by a third party who was not privy to the pair’s turbulent relationship.

On one occasion in the past year, Obumseli described being stabbed twice in the leg by an enraged Clenney. He revealed in texts how his subsequent injuries left him scarcely able to walk.

A day later, a still-injured Obumseli detailed another attack in which his fiancée struck him in the head and left him with a concussion.

Then, at the end of January, Obumseli sustained two cuts to the cheek and chin following another alleged altercation, as evidenced by photographs collected by police.

According to reports, Obumseli’s wounds were so bad that he would have required hospitalization in order to receive stitches.

In the weeks preceding his death, Obumseli anguished over being subjected to racial slurs and escalating violence at the hands of Clenney, according to newly disclosed text messages that provide the first details regarding these alleged altercations.

After their publication on Thursday, an attorney for Obumseli’s family stated that the messages and tapes indicated that Clenney ‘threatened [Obumseli’s] life’ and that they want to bring a wrongful death lawsuit against the aspiring model.

In addition, they contend that the texts give evidence, contrary to previous assertions, that Clenney was not acting in self-defense when she stabbed her partner.

‘It’s a clear trend of her being unhinged and out of control,’ Miami attorney Larry Handfield said Thursday afternoon. She posed a threat and shown a pattern of violence, and on that fateful day, it all came to an end.

In all, the state released three text exchanges between Obumseli and Clenney – which comes into addition to a trove of evidence against the influencer, including audio clips secretly recorded by the victim chronicling his abuse, and security footage taken from their elevator that showed Clenney attack her beau.

The first correspondence took place in October 2021, when the pair still lived in Texas, and saw Obumseli tell how Clenney had stabbed him in the leg following an argument, and that his wound ached so bad he ‘couldn’t f**king walk.’

In another text, he said ‘the next morning I still woke up glad I still gave you a fantastic day even though my leg was bleeding since my girlfriend stabbed me.’

He added: ‘Did I make you feel like s**t for stabbing me? No, I just gritted my teeth and hoped that tomorrow would be better.’

In a further email the next day, Obumseli expressed distress over a second incidence of claimed assault in which Clenney allegedly spit on him while ‘beating her phone’ on his face and the back of his head.

Obumseli, a bitcoin trader and investor, begged his fiancée to unlock the door to their apartment so he could rest on the couch. He was still suffering from the injuries he got during the altercation.

The texts revealed that the young professional stated he believed he had a concussion and was bleeding and vomiting.

“I have a lump now. I’m bleeding. Obumseli wrote that he was vomiting and that he had a moderate concussion and nervousness.

Moreover, he stated that he had slept for two hours in the apartment building’s lavatory in the aftermath of the claimed attack, and that he was “beyond words.”

Five minutes later, his girlfriend responded with a message in which she admitted to partaking in the aggressive behavior, but dismissed it as nothing more than a lovers’ spat.

“I apologize for punching you in the face and back of the head and spitting on you. Is it accurate? No. You really piss me off, yet I still adore you.’

Then, on January 30, after the couple had moved into the Edgewater apartment complex where Obumseli would ultimately pass away, additional text exchanges revealed the couple’s intentions to obtain ‘blow’ – slang for cocaine.

Later that evening, while Obumseli was at a bar watching football, the couple battled over the tone of their text messages, with Clenney becoming irritated when her boyfriend responded to one text with “Yes, Courtney?”

Cleny reportedly wrote, “Yes, Courtney is unneeded,” according to the Herald. I continue to have to instruct you on proper behavior.

The two would then meet again before engaging in another altercation; however, the specifics of what transpired are unknown.

Obumseli is known to have been hospitalized after sustaining two facial lacerations requiring several sutures.

As Obumseli was en route to the facility, Clenney sent a frightening text message that strongly implies she was responsible for Obumseli’s injuries.

The note adds, “Hopefully this will give you time to reflect on your choices,” with Clenney eventually adding, “enjoy the hospital.”

She wrote, “Tell them your side, and I’ll tell them what happened.”

Then, Obumseli would swiftly respond, writing, “I’m not saying anything” and “I’m going to say football incident.”

The texts reveal that during that night and the next day, a bedridden Obumseli constantly reprimanded his fiancée for the alleged attack and for ‘being stabbed several times.’

“I was in the hospital looking forward to seeing you, and you went drinking and left with another person?”

Obumseli wrote, seemingly angry that his partner was not at home when he returned the next day.

Then, he complained to his girlfriend about how she had been out partying during his hospitalization, while he was “laid out on the bed getting stitches because I lost too much blood.”

Clenney would express regret in a series of profuse apologies days after the stabbing.

“I adore you so, Christian. She wrote, “I should have been at the hospital with you and I should have slept close to you, like I usually did.”

I feel immense regret, grief, and humiliation, and I apologize profusely for hurting you.

Less than three months later, following another fight, Obumseli was fatally stabbed by Clenney, who claimed she acted in self-defense by calling the police hysterical.

Clenney was not arrested for Obumseli’s murder until four further months had gone. Police tracked her down to a rehab in Hawaii, where she claimed she was seeking treatment for drug misuse and PTSD purportedly caused by the murder.

Obumseli’s family was furious that investigators did not immediately charge Clenney for his killing, claiming that it was due to her “privilege” as a “rich white woman” and not her self-defense claim.

In an Instagram post, Jeffrey Obumseli, the victim’s brother, and his family stated that they do not believe Clenney and demand that she be charged.

The couple relocated to Miami at the beginning of the year, and almost immediately, staff and occupants of the One Paraiso building filed many domestic disturbance reports against them and initiated eviction proceedings.

Police were called to the apartment complex days before the murder when a distressed Clenney said that Obumseli had been’stalking’ her.

Obumseli was transported to a local hospital but succumbed to his injuries days later.

His family, on the other hand, is sure that Clenney is to blame, stating that she was always the aggressor in their relationship and that she became a ‘different person’ when she was drunk.

Two months before to the murder, elevator surveillance film revealed Clenney viciously beating her partner, who did not appear to defend himself.

The model was shown on camera covered in blood on her high-rise balcony immediately following the murder.

Less than two years had passed since Clenney and Obumseli began dating, and their relationship was turbulent.

She was arrested for domestic violence in Las Vegas, and police were called multiple times to their home in Austin, Texas.

In April, Obumseli’s brother Jeffrey wrote on Instagram, “The bottom line is unmistakable: Courtney is being treated differently due to her privilege as a wealthy White woman.”

Within twenty-four hours of Toby’s death, the detective on the case prematurely concluded that this was not a violent crime.

Even X-rated content emerged on her website the day after she allegedly murdered Obumseli, but it is unclear if it had been slated to go up prior to the suspected murder.

The newly discovered communications may be essential in the upcoming trial against Clenney, whose legal team has maintained its self-defense stance despite accumulating evidence.

Obumseli agonized in a message to his suspected killer weeks before his death over being subjected to the n-word and frequent abuse.

“Will love end my life?” In March, Obumseli wrote, “February was the worst month I’ve ever experienced.” I was cheating on. I was again called that term. I was struck in my sutures, which have reopened many times and are not healing quickly.’

Clenney’s OnlyFans account was deactivated within a day of her arrest.

She is currently detained pending the beginning of her trial.