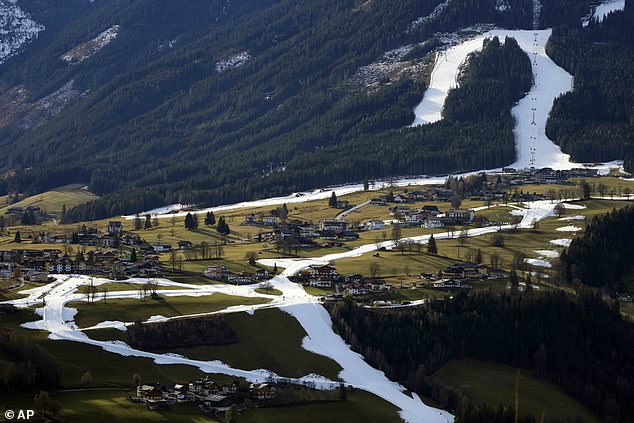 Due to the lack of snow across resorts in the Alps, a company that books ski vacations has been criticized for refusing to modify its cancellation rules.

This week, Crystal Ski Holidays has been besieged with mails from confused and irate customers scheduled to depart for ski vacations.

Many are requesting changes to their reservations so they can travel when there is more snow on the slopes.

The Alps are currently experiencing unheard-of moderate winter temperatures, and snow depths are below average across the whole region for early January.

While snowfall is expected on the slopes by Sunday afternoon and into Monday, it is unclear that it will be sufficient to reopen all closed pistes, according to experts.

This slope near Schladming, Austria, is one of several with less snow than usual for this time of year.

In the following days, heavy snowfall is expected in the Alps’ higher elevations, but there are concerns that it won’t reach the lower slopes.

However, the corporation is citing the forecasted weather change to defend its decision to prohibit changes to subsequent holidays.

A spokeswoman responded to a customer’s inquiry about a ski trip to Bulgaria by saying, “We understand your disappointment, but the decision was based on the forecast and information received from the resort.”

We are optimistic that conditions for skiing will improve next week.

Today’s Weather To Ski report stated, “More than one major storm is required to get things back on track, especially in the worst-affected regions.”

In addition, dissatisfied clients have pointed out that forecasts indicate minor improvements, but not necessarily enough to justify their investment.

In Bulgaria, according to a representative for Crystal Ski, the resort staff is “confident that temperatures are falling and that it will be cold enough for snow canons and snowfall by next week.”

While snowfall is predicted for Sunday afternoon and Monday, experts say it’s unlikely that it will be sufficient to reopen all closed pistes.

The Alps are currently experiencing unheard-of moderate winter temperatures, and snow depths are below average across the whole region for early January. Pictured: People skiing on a cross country slope near Ramsau, Austria

Skiers go downhill a slope in an otherwise snowless part of Schladming, Austria

Customers have later stated that when they called the resort directly, they were unable to receive such assurances regarding the usage of artificial snow.

The company offers a ‘snow promise’ which states: ‘If the snow lets you down, We’ll do everything we can to get you on the slopes in another resort.’

However, the guarantee is subject to the requirements that there must be no snow in your resort and the mountain must be closed.

In circumstances where short pistes are still open, or if tiny amounts of snow are falling, the operator is not required to meet the guarantee.

Currently, the most severely affected regions are in the northwestern Alps below roughly 1,600 meters.

There, the current natural snow cover is extremely spotty.

This week, Crystal Ski Holidays has been besieged with letters from confused and unhappy customers scheduled to depart for ski vacations across Europe. Many are requesting changes to their reservations so they can travel when there is more snow on the slopes.

People ride the cable car over the snowless ski run on Bjelasnica mountain, Bosnia, near Sarajevo.

Destinations higher in the Alps are not seeing as many snow problems and routes are open, but they are under increasing strain from day-trippers from lower level resorts.

The majority of French, Italian, and Swiss destinations are forecast to receive heavy snowfall.

A spokeswoman for Crystal Ski, a subsidiary of Tui, stated, ‘We are aware that slopes in Bulgaria do not have the snow conditions we would anticipate for this time of year.

‘Over the past few weeks, both our personnel on the ground and our suppliers have been closely monitoring the situation to ensure that our customers are informed as promptly as possible if the weather may influence their trip.

Customers traveling to Bulgarian resorts this weekend will be able to enjoy their ski excursions as planned because the weather is predicted to improve in the coming days, with snow forecast for the week and temperatures expected to drop, allowing the use of artificial snow producing equipment.

How much snow is expected to fall in the next days in the Alps?

On Sunday, snowfall of up to 50 centimeters is anticipated in several Alpine regions.

Fraser Wilkin, an Alpine weather expert from Weather To Ski, stated, “The much-anticipated storm will hit the Alps on Sunday and/or Monday, bringing varying amounts of snow to all regions.”

‘Between 20 and 40 centimeters of snow is forecast above 1800 meters by the end of Monday throughout a wide swath of the Alps, with 50 centimeters or more in spots, with the heaviest snowfall expected at altitude in the northern French Alps.

The snow from this storm likely won’t be enough to get the lower regions of the northwestern Alps (such as Samons and Les Gets) back on track, but it’s a start.

The temperature will also play a significant part in determining whether the snow will stick or be rapidly swept away by rain.

A portion of the ski trail in the French ski resort of Saint Gervais in the northern Alps was closed due to warm weather.

»Ski company won’t refund skiers for lack of snow in Alps: ‘Hopeful’ by next week«