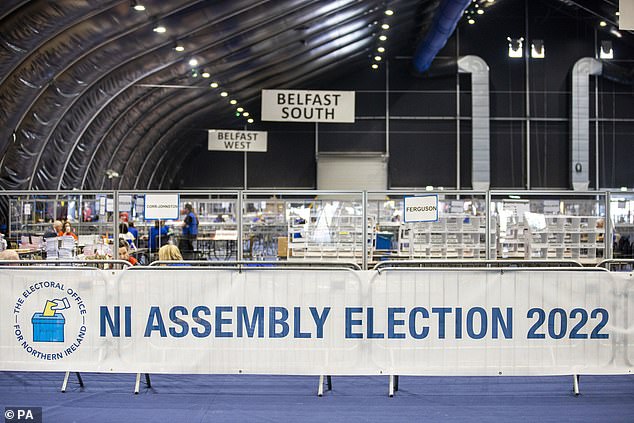 Sinn Fein’s First Minister-elect has said it is ‘time for real change’ as she is poised to make history as the first nationalist leader of Northern Ireland.

Michelle O’Neill has led Sinn Fein to a momentous victory as it is set to become the country’s biggest party for the first time in history in an election for the Stormont assembly.

The impending result means she will likely be nominated as First Minister, as the party expresses it’s intention to bring about a united Ireland within five years.

After what she described as ‘a historic day’, the 45-year-old described heralded the vote as ‘the election of a generation’ as she announced ‘it’s time for real change’, adding that her party ‘will work hard for everyone’.

Sinn Fein’s victory is likely to lead to more political gridlock at the assembly, which was collapsed by the DUP in February as it seeks to overturn Boris Johnson’s Brexit agreement.

Neither Sir Jeffrey Donaldson’s party or the Ulster Unionists have yet agreed to join a power-sharing executive in which Sinn Fein would be able to nominate the First Minister.

They have argued that a win for Sinn Fein would lead to a referendum on Irish reunification.

But the party has kept such issues low down on its agenda during a campaign that has been dominated by more immediate concerns, namely the skyrocketing cost of living.

If Sinn Finn emerges victorious, it will be entitled to the post of first minister in Belfast for the first time since Northern Ireland was founded as a Protestant-majority state in 1921.With 47 of 90 seats counted so far, results showed that Sinn Fein has 18 seats, while the Democratic Unionist Party, which has been the largest in the Northern Ireland Assembly for two decades, have 12.

The centrist Alliance Party, which doesn’t identify as either nationalist or unionist, has seen support surge and has eight seats so far.

Under Northern Ireland’s power-sharing system, created by the 1998 peace agreement that ended decades of Catholic-Protestant conflict, the jobs of first minister and deputy first minister are split between the biggest unionist party and the largest nationalist one.Both posts must be filled for a government to function, but the Democratic Unionist Party has suggested it might not serve under a Sinn Fein first minister.

The DUP has also said it will refuse to join a new government unless there are major changes to post-Brexit border arrangements, known as the Northern Ireland Protocol, that are opposed by many unionists.

Sinn Fein’s Michelle O’Neil, who has served as deputy first minister in the power-sharing executive but is poised to become First Minister, said the party wanted to work ‘in partnership with others.’

‘That is the only way we will achieve much, much more for people here, whether in terms of the cost-of-living crisis or trying to fix our health service,’ she said.

The victory for Sinn Fein and O’Neill is steeped in symbolism and serves as a major blow to unionism.

The 45-year-old was brought up in one of the most notorious battlegrounds of the Troubles and her family were deeply involved in the clashes in East Tyrone.