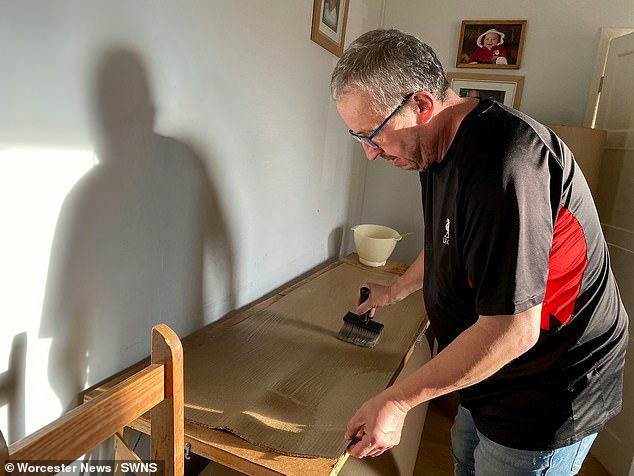 A desperate single parent was forced to insulate his cold home with cardboard after his monthly energy costs soared to above £1,000.

51-year-old Nigel Cleall contemplated moving into his garden shed with his 12-year-old son Oliver since it is warmer than their ground-floor apartment.

In a desperate attempt to stay warm this winter, Mr. Cleall purchased 100m (330ft) of industrial packing cardboard on eBay for just £1.

Now, he has used it to cover the walls and ceilings of the 1950s Martley, Worcestershire, manufactured home.

The truck driver claims he was compelled to take action because the apartment’s owner, Platform Housing Association, neglected to maintain the heating system or provide proper insulation.

Nigel Cleall, 51, has covered the walls and ceilings of his 1950s two-bedroom prefabricated home in Martley, Worcestershire with cardboard.

The truck driver claims he was compelled to take action because Platform Housing Association failed to repair the heating system and provide proper insulation.

The father of two purchased 330 feet (100 meters) of commercial packing cardboard from eBay for around £1.

He stated that the walls and ceiling are inadequately insulated, which is why heat escapes quickly from the building.

Mr. Cleall stated, “When I turn on my heating, it travels through the roof and into Martley. The age of the roof exceeds 27 years.

“I’m heating my neighborhood, not my home.” Because there is no insulation, the heat simply passes through the home.

It is a 1950s prefabricated apartment with a concrete floor that is no longer suitable for its intended use. Essentially, it is a garage.

“Platform Building brought out a thermal imaging camera to determine how well it was insulated, and it was evident that heat was escaping everywhere.

“The windows are 18 years old, the roof leaks when it rains, and it’s so cold that I must wear a coat when watching television.”

Mr. Cleall stated that he even pondered relocating to his garden shed because it is warmer than his ground-floor apartment (pictured)

Oliver, who is 12 years old, and Mr. Cleall share the apartment. Christopher, another of his children, resides with his mother.

He has covered the walls and ceiling of his living room with cardboard and will spend the winter in this room.

“My plan is to cover my living room’s walls with cardboard.”

Obviously, I will have to use my other rooms, but during the winter I will reside in my front room.

Mr. Cleall, who is separated from his wife, who resides with their 10-year-old son Christopher, stated that he can no longer afford to heat the home.

Last year, I could only afford to turn on the heating when my sons were staying with me. However, I can no longer afford that.

If I did it immediately, it would cost me £78 for just two days.

In the past year, the cost of electricity alone increased from £120 per week to £192 per week, and his total energy expenditures now exceed £1,000 per month.

Mr. Cleall has also insulated his windows, which he claims are 18 years old, with clear plastic.

When it rains, the roof leaks, and it’s so chilly that the lone parent must wear a coat. black mold is seen in his bathroom

In the past year, Mr. Cleall’s power bill has increased from £130 per week to £192 per week, and his overall energy expenditures now exceed £1,000 per month.

“I cannot afford to spend about £200 each week on my electricity, therefore we will be living in my living room,” he stated.

“All I desire is a cozy residence for me and my son, Oliver.

“I go to work, have a clean nose, and am not a criminal.”

“I do everything by the book, but I’m not getting anywhere; you’re doing something wrong.”

Dennis Evans, executive director of Platform Housing Group, stated, “We are sorry to hear of Mr. Cleall’s concerns; we are delighted to inform you that a new bathtub will be fitted later this month.”

Regarding the customer’s heating system, there are no pending jobs at his residence.

‘However, we are due for a routine heating inspection as part of our annual schedule.

One of our surveyors also visited Mr. Cleall earlier this month to discuss his concerns.