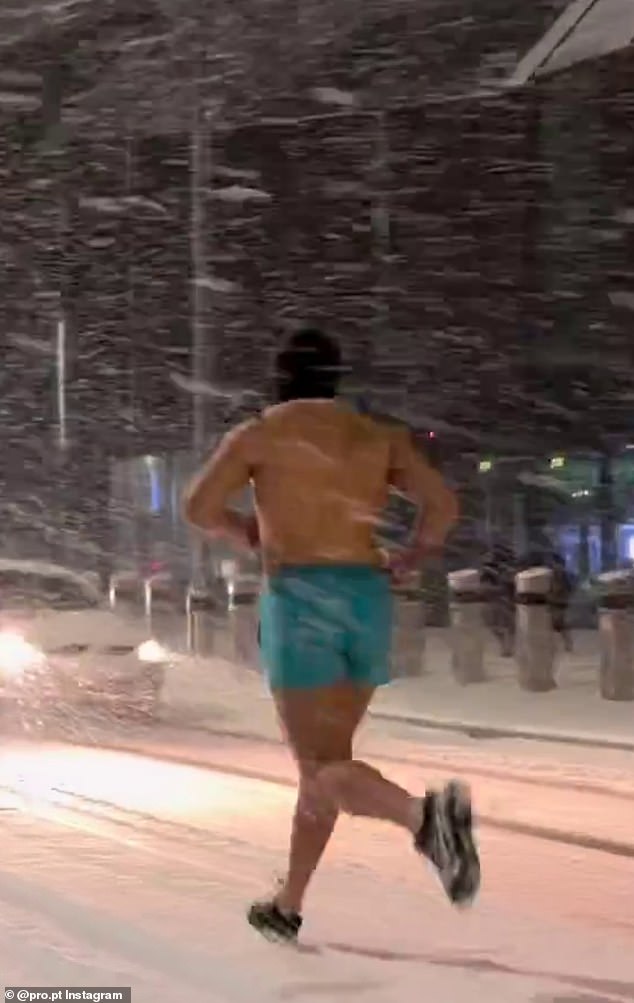 Despite temperatures of -1C, a man sprinting through snow in London wore only a pair of teal shorts and a black balaclava.

Yusef Bouattoura, a personal trainer and entrepreneur, ran through the snowy streets between Tottenham Hotspur Stadium and White Hart Lane on Sunday night.

Mr. Bouattoura donned only a pair of light-blue shorts and his running shoes despite the extremely cold weather.

Social media users noted that, despite leaving his shirt at home, he took the effort to grab a hat on his way out to workout.

Despite the frigid temperatures and snow, the fitness teacher exercised without a shirt on Sunday evening.

He was captured on camera jogging by Tottenham Hotspur Stadium near White Hart Lane, which he identified as his hometown.

As he runs along the center of the road beyond the stadium, snow-covered cars pass him in the opposite direction as he is recorded from a moving vehicle.

Some of the vehicles can be heard blowing their horns as he runs by them.

Mr. Bouattoura captioned the video on Instagram: “I’m simply enjoying myself in my hometown!”

Twitter users commented that the runner’s wardrobe choice was not particularly weather-appropriate.

This is not the first time the fitness instructor has walked the streets of London shirtless.

He ran down Loughton High Road with black shorts and a pink balaclava earlier this month.

The boxer often publishes fitness-related content, including pre-fight films, with his 64,000 followers.

The internet influencer known as Pro PT delivers fitness and lifestyle videos with his audience. In his internet profile, he characterizes himself as “Not Your Average Kid.”

Mr. Bouattoura recently uploaded a video of himself jogging down Loughton High Road while wearing only black shorts and a pink balaclava. The influencer posts fitness-related content frequently with his 64,000 followers.

The personal trainer has uploaded further footage of himself working outside in similarly revealing attire.

The personal trainer stated that he had worked with celebrities such as model Demi Rose, Love Island cast members, and music mogul Simon Cowell.

Mr. Bouattoura revealed on The Blue Tick Show that he was sent to prison at age 15 and then placed under home arrest for five years.

He claimed that he spent six months living in the disabled restroom of a gym without informing his mother that he was destitute.

»Shirtless jogger exercises in the evening wearing only shorts, sneakers, and a hat«