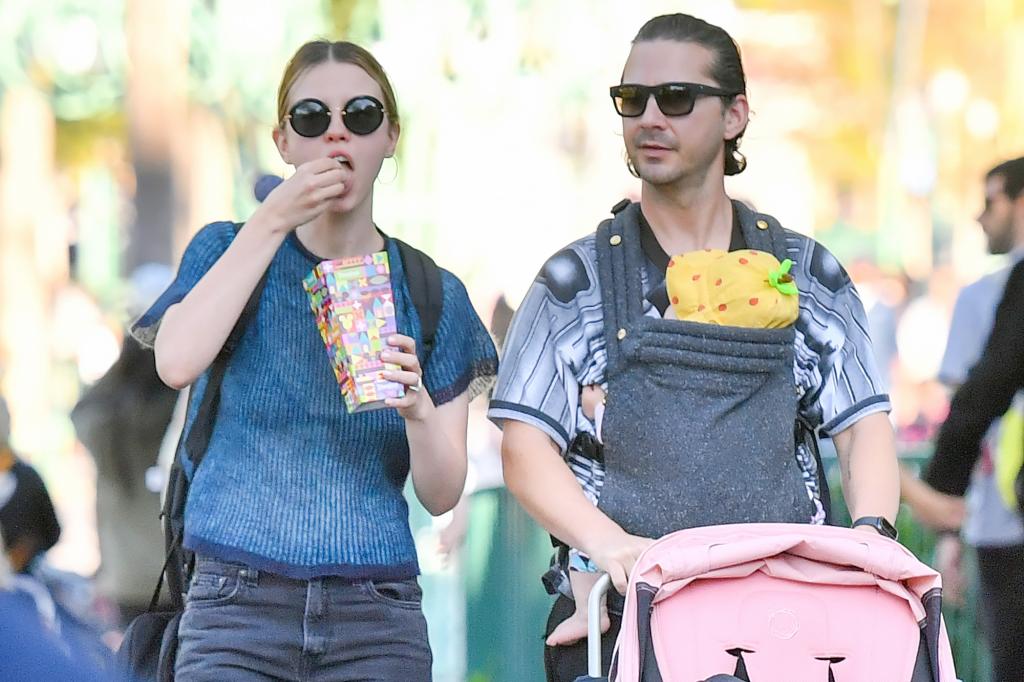 On Friday, Shia LaBeouf and Mia Goth were photographed with their 8-month-old daughter Isabel to Disneyland.

In photographs obtained exclusively by Page Six, the doting parents were dressed casually while strolling through the California theme park with a baby pink stroller.

In the photographs, 29-year-old Goth can be seen wearing a blue shirt with short sleeves, black jeans, sneakers, dark sunglasses, and a backpack while eating a box of popcorn.

The “Transformers” actor appeared to embrace his new role as a father by carrying his infant daughter on his chest in a baby carrier.

Although Isabel’s identify was largely obscured in the photographs, her lovely yellow and red polka-dot hat could be seen peeking out of the top of the carrier.

Her tiny arms and legs were also visible protruding from the sling, revealing that she was wearing Minnie Mouse-themed pants.

According to the photo agency, LaBeouf and Goth avoided the VIP Tour guides and waited in line for the rides like “regular” people during their family vacation.

In April, the Hollywood couple announced they had a kid together.

At the time, LaBeouf and Goth were observed strolling through Pasadena, California with their infant.

Prior to that sighting, there was much speculation that the “X” star was pregnant after she was spotted with a baby bump during a November 2021 date at Chuck E. Cheese.

However, her pregnancy was confirmed shortly thereafter, in early February, when a photo of Goth’s obvious baby bump emerged during a Pasadena errand.

In September, LaBeouf gushed about his “f–king joyful” daughter, stating that she “tests” him and holds him “accountable” like the “ultimate parole officer.”

“Having a daughter and knowing that she will one day search your name in a search engine and see that you are a deplorable, disgusting piece of s–t, that s–t hits,” the “Honey Boy” actor said on the “Real Ones with Jon Bernthal” podcast at the time, in reference to the sexual abuse allegations made against him.

“I have until she’s literate to create a relationship with her in which she knows me better than this public perception of who I am.”