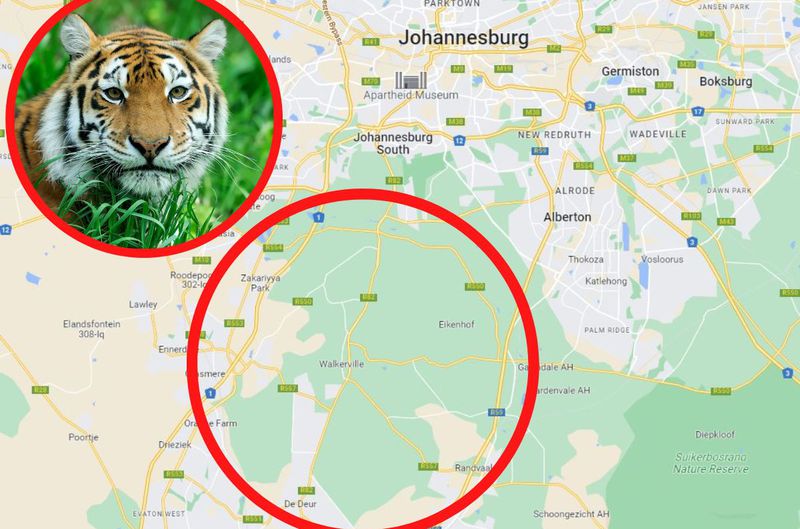 As of Tuesday afternoon, a group of trackers, police officers, and locals were still searching for the escaped tiger.

Sheba, an eight-year-old female tiger, is still at large in Walkerville and its environs in Johannesburg, according to the police.

According to police spokesperson Colonel Dimkatso Sello, the tiger escaped from its cage and assaulted a man, 39, and a dog in the area.

“Community residents are encouraged to remain vigilant after a tiger escaped from a smallholding in the Kliprivier region on Saturday, 14 January 2023.

“For their own safety, the public is warned not to approach the animal,” Sello stated.

Gresham Mandy, a local community police forum representative, stated that the tiger returned to its enclosure but escaped before anyone could “close the gate behind her.”

As tigers are territorial, Sheba is unlikely to leave her confinement, according to Mandy, who explained that such behavior is to be expected.

Once Sheba has been apprehended, she will be moved to a local large cat refuge. Last Sunday, the male companion of Sheba was darted and moved to the shelter.

Additionally, a Seaview Predator Park employee was murdered by a tiger assault.

Here is everything we know of the escaped tiger.

This is a mature female animal.

The large feline is the female half of a tiger pair privately owned by Walkers Fruit Farms.

The owner of the tiger remains unidentified.

The owner asserted that the fence was cut and the animal escaped on Saturday evening.

If you see the tiger, please call the following numbers to alert the police and other organizations:

Dial 08600 10111 to reach Crime Stoppers.
The Vereeniging and Vanderbiljpark SPCA – 083 292 5862
Additionally, a tiger has escaped in Walkerville, Johannesburg.

The Vereeniging and Vanderbiljpark SPCA stated it had a team on the scene and was working closely with authorities to secure the safe capture of the tiger.

It requested that if the tiger is observed, inhabitants of Walkerville and the surrounding area contact its emergency hotline at 083 292 5862 immediately.

The beast assaulted a 39-year-old guy, two dogs, and a pig, as reported by Mandy to Newzroom Afrika.

“He was bending over to tie his shoes when she attacked him from behind, he screamed, and then people ran out of one of the dwellings with torches and chased the tiger away,” revealed Mandy.

The severity of their injuries necessitated the euthanization of both canines, but the guy is expected to make a full recovery.

At the time of publication, there was no update on the pig’s condition.

»Sheba the tiger attacks a pig after evading captivity«