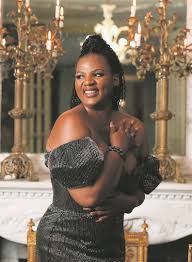 Shauwn Mkhize, aka “MaMkhize,” was having a blast at Max’s Lifestyle lounge on Saturday, January 8, where a lavish all-white party was being held, while reports circulated that her Durban home had been targeted by a group of burglars.

The Royal AM boss arrived at the party venue in Umlazi hours after returning from a vacation abroad.

As previously reported by The South African, a shoot-out took place outside MaMkhize’s La Lucia residence after a group of thieves attempted to break into the southern wing.

MaMkhize arrived at Max’s Lifestyle in a luxurious Brabus G-Class, driven by a motorcade of Metro Police, after quickly unpacking and getting ready with the assistance of her squad.

The businesswoman also made a striking entrance in a pearl-white embellished gown that she paired with matching Gucci earrings and handbag as well as strappy heels.

MaMakhize, who cohosted the event with Somizi Mhlongi, even managed to squeeze in an equally gorgeous outfit change.

Shauwn Mpisane, the soccer executive’s son, gave a performance at the after-party event later in the evening.

MaMkhize has been extremely busy lately. MaMkhize and her family had just returned from a five-star family vacation in the Maldives when they hosted the all-white party.

The CEO of Royal AM also spent time on vacation in opulent villas in Cape Town and Dubai.

MaMkhize was prepared to cheer on her team as they faced Amazulu FC in a Durban derby just a day after staying up all night at Max’s Lifestyle.