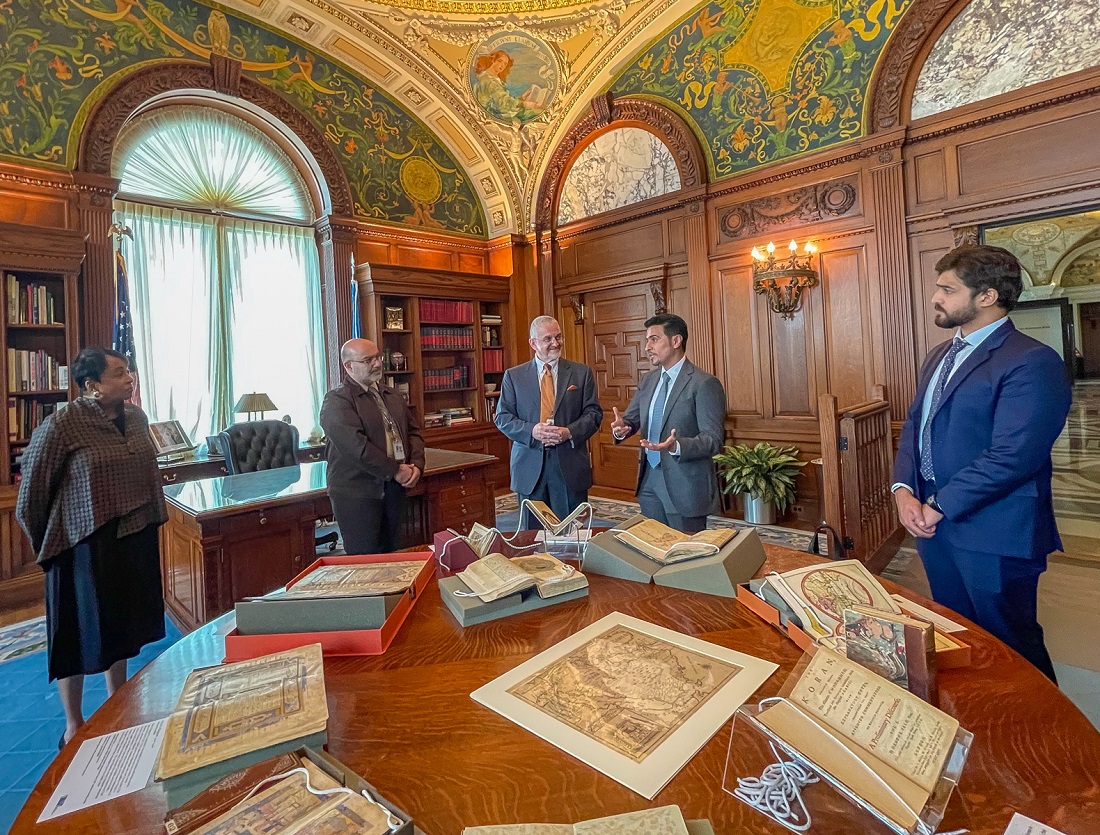 The visit allowed SBA officials to gain a deeper insight into LOC’s expertise in sourcing, management and archiving of knowledge. As the oldest cultural institution and research hub in the US, the LOC has successfully collected and archived 170 million print materials in 450 languages.

The SBA delegation was received by Carla Hayden, 14th Librarian of Congress, along with other senior LOC officials and departmental heads, who took the visiting delegates on a guided tour of the library. During a series of discussions between the two parties, which aimed at boosting collaboration and exchange between Sharjah and the USA in various areas, the American officials learnt about the key events hosted by SBA to promote Sharjah’s cultural vision, and were introduced to the UAE’s myriad creative offerings.

As the SBA delegation went through LOC’s rare collection of manuscripts and bibliographies, the officials learned about the LOC’s customer interface, which allows users to search and access the library’s unparalleled resource of more than 171 million items including over 40 million catalogued books and other print materials in 470 languages; the largest rare book collection in North America; and the world’s largest collection of legal materials, films, maps, and sheet music.

Ahmed Al Ameri took a keen interest in the African and Middle Eastern Division (AMED)’s collection, which comprises 300,000 books in Arabic and other languages. The delegates also visited the Rare Book and Special Collections Division that hosts the world’s first translated copy of the Holy Quran, which dates back to 1765, and was part of former US President Thomas Jefferson’s collection. It is the very first copy that was translated directly from Arabic into English as all previous copies of the Quran were translated from French.

Ahmed Al Ameri said: “Sharjah Book Authority seeks to actively promote Emirati culture and literature around the world. We are also keen to explore the expertise of globally leading cultural institutions such as the LOC – a towering historical institution preserving invaluable human history in addition to the oeuvres of genius authors, writers, thinkers and researchers through millions of books and catalogues.”

He added, “Cultural movements grow and prosper via open dialogue and sharing of ideas. This is the vision of His Highness Sheikh Dr. Sultan bin Muhammad Al Qasimi, Member of the Supreme Council and Ruler of Sharjah, which takes us around the world on our cross-cultural endeavours. Acquainting ourselves with the invaluable experiences of global cultural institutions is one of the most effective ways to ensure the success of any cultural project, and thus, a key focus area for Sharjah and SBA.”

Dr. Carla Hayden lauded SBA’s efforts to enhance the emirate’s cultural presence globally, pointing out that Sharjah is recognised globally as a cultural capital in the Middle East. She emphasised that the Sharjah International Book Fair (SIBF), one of the top three book fairs in the world, adds significant cultural value.