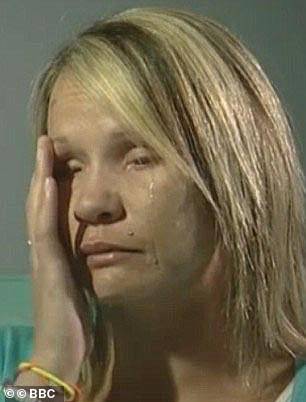 A thug who blinded his lover by gouging out her eyes and was jailed for life in 2012 has been granted a parole hearing which could result in his early release.

Jenkin had watched a DVD featuring eye gouging the night before the attack at her house in Hayle, Cornwall.

The mother-of-two suffered horrific injuries in the ‘premeditated, sustained and vicious attack’.

It was dubbed one of Britain’s worst domestic abuse cases at the time.

A Parole Board spokesman said: ‘We can confirm the parole review of Shane Jenkin has been referred to the Parole Board by the Secretary of State for Justice and is following standard processes. A decision is expected in May.

‘Parole Board decisions are solely focused on what risk a prisoner could represent to the public if released and whether that risk is manageable in the community.

‘A panel will carefully examine a huge range of evidence, including details of the original crime, and any evidence of behaviour change, as well as explore the harm done and impact the crime has had on the victims.

‘Members read and digest hundreds of pages of evidence and reports in the lead up to an oral hearing. Evidence from witnesses including probation officers, psychiatrists and psychologists, officials supervising the offender in prison as well as victim personal statements are then given at the hearing.

‘The prisoner and witnesses are then questioned at length during the hearing which often lasts a full day or more. Parole reviews are undertaken thoroughly and with extreme care. Protecting the public is our number one priority.’

The hearing will be heard early in May. It will be Jenkin’s sixth appeal to the Parole Board. The others have been rejected.

He is currently held at a maximum security prison and has spent time in a psychiatric unit.

Jenkins subjected his ex-lover to a 12-hour attack in which he broke her jaw, throttled her until she was unconscious and blinded her by gouging out her eyes.

Truro Crown Court heard in May 2012 that Jenkin attacked Miss Nash while she slept at her home.

Ignoring her desperate pleas to call an ambulance, Jenkin kept her imprisoned for 12 hours and throttled her into unconsciousness before blinding her.

She had several operations over four weeks of hospital treatment but surgeons could not save her eyes.

Miss Nash, then 32, told the court of her heartache at knowing she will never again see her two sons.

Losing her sight felt like being buried alive, she said.

The night before the appalling attack, Jenkin had watched a horror film with Miss Nash that featured a woman having her eyes gouged out.

Describing the assault, Judge Christopher Clarke said that Jenkin ‘repeatedly held her tightly around the neck and, as he continued to strangle her, she lost consciousness and from time to time she hallucinated’.

Jenkin had attacked Miss Nash before. Tina said she had thought she could change Jenkin’s violent behaviour but warned other victims of domestic violence to get out ‘before it is too late’.

Jenkin had also been repeatedly banned from his local pubs in Penzance for violence, and three months before he blinded Miss Nash he was reportedly charged with breaching bail following an assault charge.

The 18-stone brute was jailed for life in a secure mental health unit and ordered to serve at least six years before being considered for release.

He immediately appealed against his sentence but the Court of Appeal rejected it.

His lawyers argued that the life sentence should be quashed to allow him to go free when his doctors are convinced he had beaten his mental illness.

But the judges ruled that Jenkin was dangerous with or without a mental illness.

Tina became a campaigner against domestic violence after her nightmare ordeal with Jenkin.

She wrote a book highlighting the scourge of abuse in the home and begged other victims to seek help and not stay silent.

She spoke movingly of her own experience and urged women to flee abusive relationships ‘before it is too late’.

Her book Out Of The Darkness describes how Jenkin beat her unconscious and poked out her eyes at her home, telling her: ‘You’re never going to see your kids again.’

The 12-hour attack happened as her sons aged 13 and three were sleeping in the same house.

She wrote: ‘I sat up and reached my hand to my face… and felt my eyeball hanging halfway down my cheek.

‘I touched my slippery eyeball, like I couldn’t believe it was real. My other eye was swollen to the size of a tennis ball.’