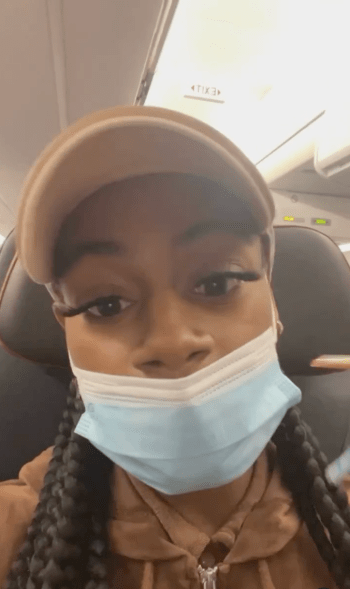 Sha’Carri Richardson, an American track and field standout, reported on Instagram on Saturday that she was removed from an American Airlines flight following an incident with a flight attendant.

Richardson captioned one of her videos as follows: “Prior to the video, this gentleman requested that I end a cell phone call, which I did.” “I told him I didn’t appreciate his tone with me. After that, while he stood in front of me performing the safety procedures, he continued to lean over to examine my phone. At this point, he requested confirmation that my phones were on airplane mode. He requested that I demonstrate. Which I did in his presence.”

Multiple passengers can then be heard begging Richardson to stop arguing with the flight attendant as she continues to do so.

Richardson had another altercation with a different passenger, and he claims that she, too, was insulted by other passengers. During her explanation that she believes the flight attendant should have been removed as well, another passenger can be heard saying, “Thank you, but I’m going to miss my connection, so I must now exit the aircraft.”

“Oh, so you’re concerned about our relationship when a grown man disrespects me?” Richardson gave a reply.

The passenger said, “I could care less.”

Richardson was then removed off the aircraft, where she proceeded to exchange obscenities with passengers and flight personnel. As she left, she was met with applause.

“Tell me if I’m wrong to seek legal action against @americanair. Not only did the man threaten me, but he also threatened an innocent bystander who only wanted a picture with me. Richardson shared a video of a male flight attendant threatening a female passenger. At the beginning of the video, a white man can be heard saying, “I don’t give a f as a man that this flight attendant is intimidating a woman.” “Also, the captain was not doing anything to help the situation, and this flight attendant received applause when I exited the aircraft, despite the fact that the disrespect I experienced would not have occurred if I were one of them.”